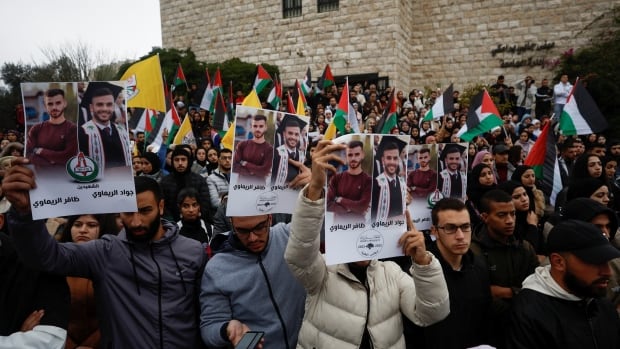 Israeli forces killed four Palestinians in separate incidents in the occupied West Bank on Tuesday, Palestinian and Israeli officials said, the latest in a months-long series of deadly clashes between security forces and Palestinians.

Two brothers were killed near the hub city of Ramallah and a third man was shot in the head in the town of Beit Ummar near the city of Hebron in clashes with Israeli forces, the Palestinian Health Ministry said.

The Israeli military confirmed the two clashes and said it was aware of the reports of two Palestinians killed near Ramallah and was investigating.

Later on Tuesday, Israel’s military said a female soldier was injured in a ramming attack around the Kochav Yaakov settlement near Ramallah. The suspected Palestinian attacker was shot by police and later confirmed dead by a doctor at a Jerusalem hospital.

In a video circulating on social media, a car was seen turning around at a junction and speeding toward a soldier who was walking on a pavement.

The Israeli military has cracked down on militant groups and protesters across the West Bank following a number of attacks by Palestinians in Israel earlier this year.

About 200 killed in violence this year

Tuesday’s clashes began when two Israeli military vehicles stalled outside Beit Ummar during what the army called routine activity and troops opened fire when protesters shot at them and hurled rocks and petrol bombs, the military said.

The incident near Ramallah appeared similar, with troops firing on protesters throwing stones and petrol bombs.

Hundreds gathered outside a Ramallah hospital to pay their respects to the family of the two brothers, both in their early 20s.

“They are my children,” the father was heard saying through tears as he embraced his dead sons in a video circulating on social media.

Senior Palestinian official Hussein al-Sheikh in a tweet called the killing of the brothers an “execution in cold blood.” The Palestinian Health Ministry said 205 Palestinians have been killed this year, including those who died during a brief conflict in Gaza in August.

According to Israeli military figures, prior to Tuesday’s bloodshed, the number of Palestinians killed so far this year stood at 136, including civilians and members of militant groups. At the same time, 23 Israeli civilians and eight security personnel have been killed in Israel and the West Bank.