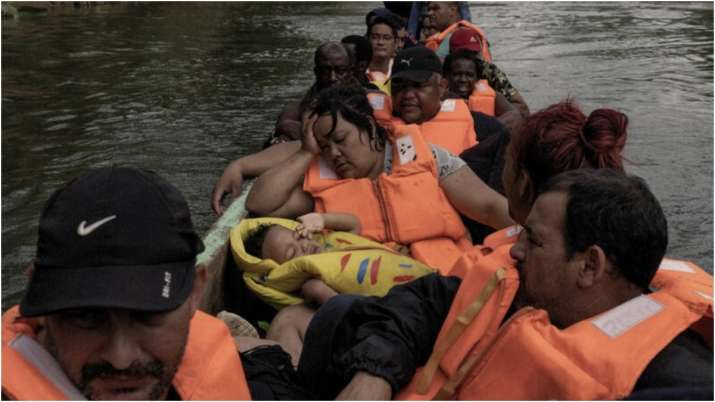 Global forced displacement had surpassed 84 million in mid-2021, according to the UN High Commissioner for Refugees (UNHCR), and the figure is still rising.

Despite being set in diverse geographies such as Afghanistan, Syria, and Cambodia, the films ‘Flee’, ‘Born in Syria’, ‘Human Flow’, ‘First They Killed My Father’, and ‘For Sama’ remind us that all human beings deserve to be heard, seen, and treated with dignity and compassion.

These critically acclaimed documentaries, one of which Zee Special Projects is bringing to India, demonstrate that the refugee crisis cannot be defined solely by statistics.

Here is an overview of these moving, real-life stories that are available on various OTT platforms.

‘Flee’ is an animated account of a young Afghan boy named Amin’s perilous journey, and it begins with a powerful question: “What does home mean to you?” It then goes on to describe how Amin, who used to shut out the world with his headphones while listening to pop music, can no longer ignore Afghanistan’s civil unrest. He abandons his beloved home and flees into an unknown future. This journey takes him across continents until he finds a semblance of normalcy decades later. Can he, however, truly forget the horrors he and his family have endured? Can he forget the depravity and cruelty he has witnessed? Can he ever feel secure enough to settle down in one place? Check out this Oscar-nominated Jonas.

Documentaries by Bernan Zin, such as ‘Born in Gaza’ and ‘Born in Syria,’ have helped to raise awareness of the trauma experienced by children who have been displaced by war. The film begins with images of an unsteady dingy packed with crying children and young and old faces marked by fear, desperation, and exhaustion. They remind us of the horrors that millions of refugees face on a daily basis. The documentary tells the stories of seven children whose lives and families have been shattered. The essence of the film is encapsulated in the words of 13-year-old Marwan, who says, “I thought crossing the sea would be the worst, but having nowhere to go is worse.”

‘Human Flow,’ directed by Ai Weiwei, is a 2017 documentary with a macro and micro perspective on the current global refugee crisis. It takes us on an epic journey to more than 20 countries to document the impact of forced human migration on individuals and communities. This film confronts us with stories that are largely untold, using drones to sweep across the flow of migrants and intimate accounts shot with phone cameras. The film is a call to compassion and empathy for fellow humans who have nothing to do with the geopolitical upheavals in which they are helplessly caught. Ai investigates the causes of mass migrations and seeks long-term solutions that will allow future generations to live without fear.

First They Killed My Father

Angelina Jolie’s film adaptation of activist Loung Ung’s autobiographical book by Oscar-winning actor, director, and UNHCR Special Envoy Angelina Jolie allows us to see the Cambodian genocide through the eyes of a young survivor. The film recounts how the young girl and her family endured unspeakable suffering under Pol Pot’s regime. It sensitively addresses the issues confronting internally displaced people (IDPs) who are dehumanised in their home countries. Loung Ung, for example, was made a child soldier at the age of seven during the Communist Khmer Regime. The film, set in 1975, depicts Loung’s training as a child soldier while her siblings were sent to labour camps under the Khmer Rouge regime. It also reveals the tenacity that no human being possesses.

‘For Sama,’ a BAFTA-winning documentary directed by Waad Al-Kateab and Edward Watts in 2019, has been praised for providing a rare account of war from a female perspective. The film follows Waad Al-journey Kateab’s as a mother, wife, journalist, and rebel during the Syrian uprising in Aleppo with startling intimacy. She discovers she is pregnant while married to Hamza Al-Kateab, one of the few doctors left in Aleppo. As the war escalates, she gives birth to her child. On March 11, 2019, the film premiered at the South by Southwest festival, where it won the Grand Jury and Audience Awards in the Documentary Feature Competition. It was nominated for four BAFTA awards, as well as the Academy Award for Best Documentary Feature at the 92nd Academy Awards.