Home India Top Story 5 out of 5 qualifiers: Who the SA franchises will play in... 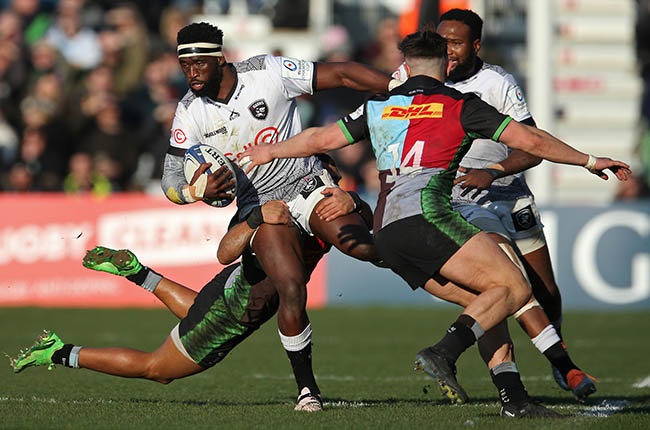 Siya Kolisi and the Sharks will play Ospreys. (Photo by Steve Bardens/Getty Images)

Despite a weekend of mixed results, South African rugby could once again bask in its strength after all five of its franchise managed to reach the knockout stages of the European Champions and Challenge Cups.

That journey will start on the weekend of March 31.

All the local sides had to overcome various challenges in the inaugural pool stages they participated it, notably the inconvenience of hectic travelling times because of SA Rugby’s deal with Qatar Airways dictating stopovers in Doha.

It meant the URC sides had to carefully calibrate their resources, with the Bulls even sending a weakened team to Exeter to focus on their URC title challenge.

All’s well that ends well though.

The Sharks were the first side to qualify, having won their first three games before becoming unstuck on Saturday in a pulsating 29-39 defeat to Harlequins in London.

They nonetheless will have a fixture against Munster at King’s Park, a match they’d definitely fancy given the familiarity factor.

The Stormers secured their home playoff with a superb second half performance in a 30-16 win over Clermont, which hands them a meeting with Harlequins.

John Dobson’s charges will certainly relish the challenge against Andre Esterhuizen and co.

The Bulls will be banking on a Leinster-type miracle in last season’s URC semi after their shocker in the snow against Lyon condemned them to a taxing journey to Stade Toulousain, where they’ll have to take heavyweights Toulouse head-on.

Meanwhile, the Lions have the satisfaction of Ellis Park hosting their Challenge Cup playoff following their tense 30-25 win over the Dragons.

Intriguingly, their opponents are Racing 92, who a fortnight ago sensationally sealed a move for Siya Kolisi.

And the plucky Cheetahs, with no home ground, will travel to France to face Cheslin Kolbe and Toulon after their dramatic win over Pau.