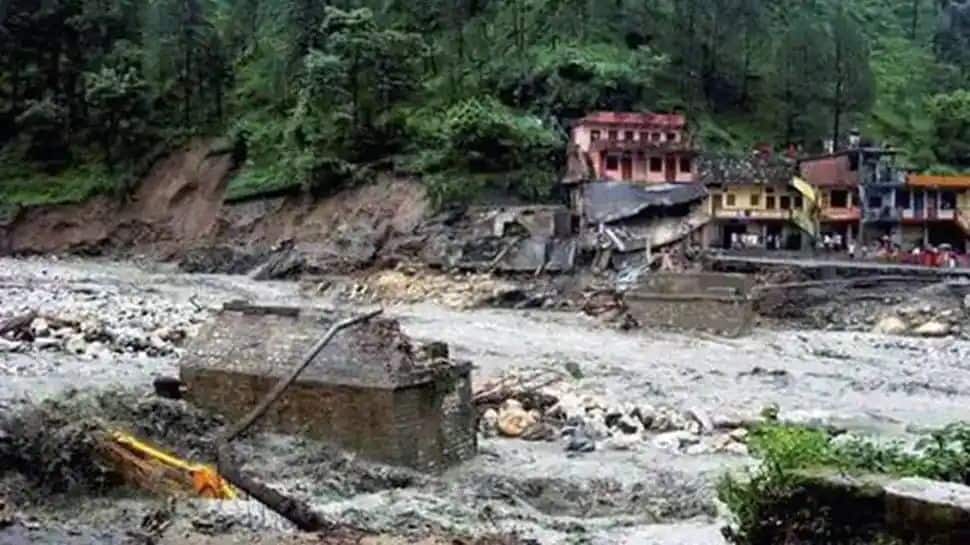 Shimla: At least six people have been killed and 13 are missing in two separate incidents of flash floods and landslides in Himachal Pradesh on Saturday. The flash floods and landslides triggered by heavy rains have caused colossal damage to the Himalayan state. The incessant rains have caused extensive damage to public properties in the districts of Mandi, Chamba, Kangra, Kullu, Hamirpur and Shimla in the past 24 hours. Chief Minister Jai Ram Thakur expressed condolences over the deaths and said that the administration is carrying out rescue operations on a war footing in the affected districts.

Train service between Jogindernagar and Pathankot route has been suspended after the Chakki bridge in Kangra district collapsed in the morning due to heavy rains. The railway authorities had declared the bridge unsafe. In a couple of other incidents in this district, a kacha house collapsed killing a nine-year-old child, meanwhile, a 48-year-old man, identified as Bal Mukund, was killed in Lahar village following a landslide.

#WATCH | Himachal Pradesh: The railway bridge on Chakki river in Himachal Pradesh’s Kangra district damaged due to flash flood, and collapsed today morning. The water in the river is yet to recede: Northern Railways pic.twitter.com/ApmVkwAkB8
— ANI (@ANI) August 20, 2022

According to officials, 22 people who were stranded following a flash flood in the state’s Hamirpur district were evacuated safely. Three people were killed after their house collapsed following a landslide triggered by rains in the Chamba district.

In Mandi, a girl was killed and 13 others were feared dead in a landslide and flash flood triggered by heavy rains.

The body of a girl has been recovered about half a km away from her house in Baghi Nullah on Mandi-Katola-Prashar road on Friday night, while five members of her family were washed away, state disaster management department officials said.

Several families also left their houses located between Baghi to Old Katola areas after a cloud burst and took shelter in safe places. Eight members of another family are also feared buried under the debris of their house following a landslide at Kashan village in the Gohar development block, the department added.

Several roads in the Mandi district have also been blocked following flash floods and multiple landslides damaging several vehicles. The Pathankot -Mandi national highway has been closed for traffic. Many villagers were stuck as water entered their houses and shops at Balh, Sadar, Thunag, Mandi and Lamathach, officials said.

Himachal Pradesh’s disaster management department has issued a warning for landslides due to heavy rains predicted in the state till August 25.