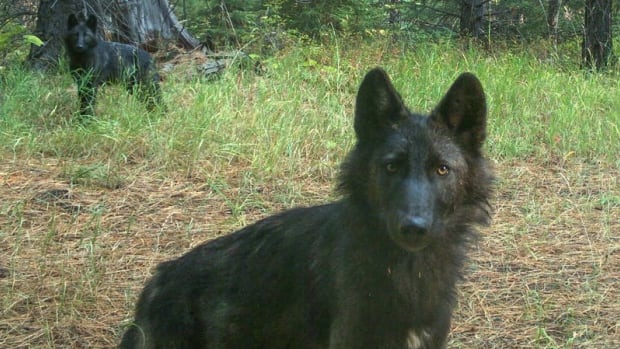 As It Happens6:56A possible new wolf pack in Oregon has conservationists cheering

A new family of wolves has been spotted in Oregon, giving conservationists hope for a species that was once nearly wiped out across the U.S.

“Any time that there are wolves going back into an area that this species once called home is just such a joyous moment,” Amaroq Weiss, senior wolf advocate for the Center for Biological Diversity, told As It Happens host Nil Kӧksal.

“In this country, we did our best to wipe out wolves. And it’s only been the last 40, 50 years that there’s been environmental awareness that we need wolves back, that they’re really important.”

The Oregon Department of Fish and Wildlife announced this week that it identified a family of wolves with two adults and two pups in the northern Cascade Mountains.

They were spotted on trail cameras in December on the reservation of the Confederated Tribes of Warm Springs, about 160 kilometres southeast of Portland.

Four wolves, the department says, constitutes a pack. If the entire family survives to the end of the year, when Oregon does its yearly count, they will be officially dubbed the Warm Springs Pack. That would bring the total number of wolf packs in the state to 22.

Wolves in the Cascades are protected under the federal Endangered Species Act.

Back from the brink

Wolves once ranged across most of the U.S., but a 1930s government-sponsored program of trapping and poisoning put them on the brink of extinction.

Estimates of how many wolves roamed North America before the arrival of European colonists vary, but the Center for Biological Diversity says there may have been as many as two million.

Today, there are about 15,000 remaining in the U.S., according to the Wolf Conservation Centre, which adds up data from different state wildlife departments.

More than 3,000 of those wolves occupy six states in the Northern Rockies and Pacific Northwest, according to The Associated Press. However, wolves remain absent across most of their historical range.

“It didn’t take long for us to wipe them out,” Weiss said. “Settlers moved west and cleared the land for their grain and their livestock. We wiped out all the wolves’ prey, the deer and the elk and the bison … and then we wiped out the predators that fed on those animals because those predators were then turning to livestock.”

It’s our job, she says, to undo the damage we caused.

“We cleaned house, and we have obligations, moral obligations, to this species to bring them back. [We also have] ecological obligations, because having wolves back makes for a healthier place on the landscape,” she said.

Wolves have an important place in a rich and complex ecological “tapestry,” Weiss said.

They eat prey like deer and bison, which prevents them from overfeeding on vegetation, which creates better habitats for migrating birds and more materials for beavers to create dams. This, in turn, create habitats for frogs and fish to live, and can even help stop the spread of wildfires.

“All of this stuff is interconnected and if you can put these integral pieces back, like the wolves, you can begin to rebuild the health of an ecosystem,” she said.

The Oregon Department of Fish and Wildlife counted at least 175 wolves in the state in 2021, an increase of just two from the previous year.

It was the slowest rate of wolf growth since 2016, although agency officials did add that wolves expanded their range into four new areas of activity in rural areas in Jefferson, Klamath, Grant and Union counties.

The number of documented packs in 2021 decreased from 22 to 21 after an entire pack was killed by poisoning in eastern Oregon. Of the 26 wolf mortalities documented that year, 21 were caused by humans, according to the agency.

Weiss blames those deaths on illegal hunting and called on law enforcement to put more resources toward enforcing laws that protect the animals.

In February, a judge restored federal protections under the Endangered Species Act to wolves in the western two-thirds of Oregon. Those protections were removed during the administration of former president Donald Trump. Weiss says those protections should be expanded to cover the whole state.

At the time, gun lobby organizations and some farming groups spoke out against the move, citing a threat to livestock.

But Indigenous people lived alongside wolves before the arrival of European settlers, Weiss says, and people can do the same today. She suggests farmers worried about their livestock employ methods like using sheepdogs, or having humans on horseback watching out for their herds.

“There’s a lot of concern and a lot of hype about wolves, but we can coexist with them,” she said. “And many agencies are working hand-in-hand with livestock owners to show them some of these best management practices.”