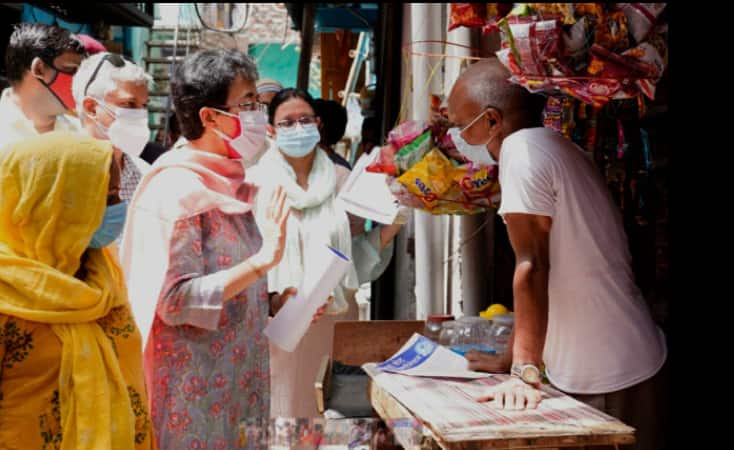 These leaders appealed to representatives of RWAs, Youth Groups, Women’s Groups, Market Associations, NGOs and Religious Organisations to spread awareness and encourage citizens above 45 years to get vaccinated at local polling booths in their assembly constituencies. The Delhi government has made adequate arrangements for vaccination at the polling centres.

Food & Civil Supplies Minister of Delhi, Imran Hussain launched the ‘Jahan Vote, Wahan Vaccination’ initiative of the Delhi government to spread awareness about Covid vaccination in the Ballimaran Assembly constituency. He went from door to door, encouraging people to get vaccinated. He appealed to representatives of RWAs, Youth Groups, Women’s Groups, Market Associations, NGOs and Religious Organisation to do their bit in encouraging citizens aged 45+ to get vaccinated at local polling booths in the assembly constituency.

Hussain said that Booth Level Officers had also begun visiting the people in their wards, and different teams are encouraging citizens to get vaccinated at local polling booths. E-rickshaws have been arranged to carry citizens to polling booths to get vaccinated. He said that those above 45 years of age should be vaccinated in four weeks, and the Delhi government will similarly carry this out for those in the 18-44 years age category as well.

He also interacted with people who received their vaccine at these centres and seemed to appreciate the efforts of Delhi Government. Hussain said that this campaign will achieve the goal of 100% vaccination in Delhi, with the government having made adequate arrangements for vaccination at the centre. The polling centres are usually near the houses, which makes walking up to the places convenient.

In Kalkaji, MLA Atishi started the ‘Jahan Vote Wahi Vaccination’ in Ward 91 and held a march. She tweeted, “Initiated the work of taking the information of Chief Minister Arvind Kejriwal’s #JahanVoteWahanVaccine campaign from door to door in Kalkaji”. She added that from today, she will go from house to house to ensure that all 45+ age groups get the covid vaccines from their local polling booth.

A Booth Level Officer, a civil defence volunteer and Aam Aadmi Party workers will visit homes to encourage citizens to get vaccinated. These people will also help people in the registration process. At Kalkaji’s ward number 91, there are 44 booths and 44 teams of AAP will be going door-to-door, helping people where needed. This will continue tomorrow and the day after at other wards.

Atishi said, “In this way, all the citizens of Kalkaji who are over 45 years will be vaccinated in the coming three weeks. This is a first of its kind initiative taken by the Delhi Chief Minister to defeat the COVID-19 pandemic.”