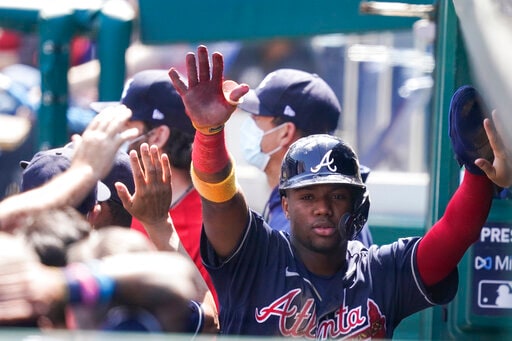 WASHINGTON: Atlanta pinch-hitter Pablo Sandoval drove a two-run homer to the deepest part of the ballpark off a Washington reliever who took over after Stephen Strasburg’s six scoreless innings Wednesday, lifting the Braves to a 2-0 victory over the Nationals and a doubleheader sweep.

In the opener, Ronald Acua Jr. led the way with a double and a pair of singles to help Atlanta snap a season-starting four-game losing streak by edging Washington 7-6.

Sandoval, who hit three homers in one game while earning World Series MVP honors for the San Francisco Giants in 2012, signed a minor league contract in January with the Braves, setting him for a one-year, $1 million deal if he made the 40-man roster.

The guy affectionately known as Kung Fu Panda sure looks like a bargain right now at 34, especially after driving a 96 mph fastball from Tanner Rainey (0-1) more than 400 feet following Dansby Swanson’s two-out single in the seventh and final inning.

Luke Jackson (1-0) earned the win in Game 2 by pitching around a pair of walks in the sixth, before Sean Newcomb got three strikeouts for the save.

Strasburg hadn’t pitched in a regular-season game since being shut down last August and having carpal tunnel surgery on his right wrist.

Reaching 95 mph with his fastball, dropping in his knee-buckling changeup and the occasional curve, Strasburg struck out eight and walked two while exceeding his total inning output for 2020, which was just five.

The 2019 World Series MVP made only two appearances last year. The 32-year-old right-handers preparation this spring was slowed by a left calf issue, but he showed zero signs of being anything but at his best Wednesday, retiring his last 10 batters.

The only hit he allowed was a single to the games second batter, Ozzie Albies. The only real trouble came in the third, when Strasburg walked Acua and Albies, bringing Freddie Freeman to the plate. But Strasburg retired the reigning NL MVP on a fly to center.

Strasburg, who doubled in his first at-bat, was lifted for a pinch-hitter in the sixth after 85 pitches.

In Game 1, the Braves put up five runs in the second inning off Erick Fedde (0-1), then wound up barely holding on with a save by Will Smith a day after he gave up a walk-off hit to Juan Soto.

I said this morning to the guys: It would be nice to see you put an inning together. … That was very encouraging, manager Brian Snitker said after the Braves avoided their first 0-5 start since 2016. I knew it was going to happen at some point.

Smith, Atlantas fifth pitcher, didn’t have an easy time of things, though.

Trying to protect a 7-5 lead, the first batter he faced Wednesday was Soto. This time, Soto led off the bottom of the seventh by walking, and Starlin Castro drove him in with a double. Another walk put the winning run on base with one out, but Smith got Andrew Stevenson to ground into a double play to end it.

Even though 4,927 spectators were present unlike last season, when all fans were banned – there still was fake crowd noise piped in, offering an odd, and annoying, hum of a soundtrack.

With nary a cloud interrupting a crystal blue sky, and a temperature of 75 degrees at first pitch and climbing, the teams combined for 11 runs after merely two innings of the first seven-inning game.

Washington is missing nine players because of a coronavirus outbreak that led to the postponement of the team’s first four games. The three in their opening series against the New York Mets were rescheduled Wednesday, with two pushed to June and one to September.

Four players tested positive for COVID-19, and another five who would have been on the 26-man roster are under quarantine because they potentially were exposed to the illness.

Two of the additions from the Nationals’ alternate training site made their MLB debuts in Game 1 Wednesday: Cody Wilson flied out as a pinch-hitter and lefty reliever Sam Clay struck out two in a scoreless inning with Dad among the family members on hand.

“Doesn’t matter how many people are in the crowd, I can hear him over everybody,” the 27-year-old Clay said.

Braves: Game 1 pitcher Max Fried was hit by a batted ball but neither he nor Snitker sounded too worried about the lefty’s leg. Nothing too serious,” the pitcher said.

Nationals: Players under quarantine could rejoin the club on its upcoming six-game road trip, manager Dave Martinez said. Its a possibility. It really is, he said.

Braves: Home opener is Friday against the Phillies, with Charlie Morton starting for Atlanta against Zack Wheeler.

Cesaro Gets Attacked by Seth Rollins after Challenging Roman Reigns

Stefanos Tsitsipas Moves into Semis as Alejandro Davidovich Limps Out