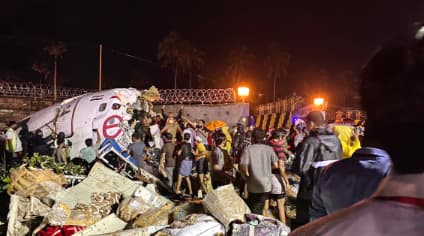 New Delhi/Thiruvananthapuram: As many as 89 passengers injured in the Air India Express plane crash in Kozhikode have been discharged from hospitals while 83 others were undergoing treatment as on Wednesday, the state government said.

Kerala Chief Minister Pinarayi Vijayan said 83 people were under treatment at various hospitals and the condition of 22 of them was ‘serious’.

“Eighty-three survivors of the Karipur plane crash are being treated at various hospitals in Kozhikode and Malappuram districts. While 61 passengers are recovering fast, 22 people are still in serious condition,” he told reporters in Thiruvananthapuram.

Earlier in the day, the Air India Express said 85 passengers injured in the August 7 crash have been discharged from hospitals after “obtaining complete fitness”.

The airline also said its contract service provider Kenyon International arrived at Kozhikode on Monday and has started the process of “search and retrieval” of the baggage belonging to the crew and passengers who were in the aircraft.

The US-based company is conducting its process with the help of Air India officials, it added. Air India Express is a wholly owned subsidiary of national carrier Air India.

“We will ensure that all the baggage retrieved is handed over to the passengers and family in due course, after the cleaning and sanitisation process,” the airline noted.

Vijayan also said some miscreants were spreading fake news that baggage from the crashed flight had been stolen. “No such incident has taken place. Strict action will be taken against those who spread fake news,” he added.

The Air India Express flight from Dubai with 190 people on board, including a six-member crew, overshot the tabletop runway during landing at the Kozhikode airport in heavy rain on Friday night.

It fell into a valley 35 feet below and broke into pieces, killing 18 people including the two pilots.

A total of 172 people were admitted to hospitals. The injured passengers of IX-1344 flight are being treated at various hospitals, the airline said.

“As on date, 85 injured passengers have been discharged from various hospitals after obtaining their complete fitness,” it added.

Air India Express has only B737 aircraft in its fleet. The airline had said on Sunday the mortal remains of 16 passengers killed in the plane crash have been handed over to their families, and added that authorities were investigating the accident.