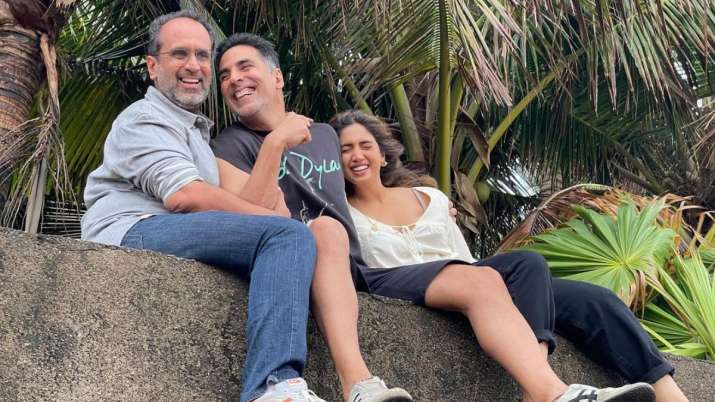 Superstar Akshay Kumar on Wednesday announced that Bhumi Pednekar is set to star alongside him in Aanand L Rai’s upcoming feature film “Rakshabandhan”. The actor duo has previously collaborated on movies like “Toilet: Ek Prem Katha” (2017) and Pednekar-starrer “Durgamati”, on which Kumar served as co-producer. “When you are happy, it shows. And indeed we are. To have @bhumipednekar onboard #RakshaBandhan,” Kumar wrote on Twitter alongside a picture with Pednekar and Rai.

The film is written by Rai’s longtime collaborator and National Award-winning screenwriter Himanshu Sharma, known for “Zero”, “Raanjhanaa” and the “Tanu Weds Manu” franchise. “Rakshabandhan” is described as a special tale which celebrates “relationships in the most beautiful way”.

The film will be Kumar’s second collaboration with Rai, after “Atrangi Re”, which features Dhanush and Sara Ali Khan.

Meanwhile, on the professional front, Pednekar was last seen in films like “Dolly Kitty Aur Woh Chamakte Sitare” and “Durgamati”, both of which released last year. She will next be seen alongside Rajkummar Rao in “Badhaai Do”. The film is the second instalment in the “Badhaai Ho” franchise. The film is directed by Harshvardhan Kulkarni, and is written by Suman Adhikary and Akshat Ghildial, who earlier wrote “Badhaai Ho.” Besides this, Bhumi also has Karan Johar‘s multi-starrer ‘Takht’ in the pipeline.

Talking about Akshay, he has an exciting line-up of movies. He has films like Atrangi Re’, ‘Raksha Bandhan’, ‘Bachchan Pandey’, ‘Sooryavanshi’, ‘Bell Bottom’, ‘Ram Setu’, ‘Prithviraj’ and ‘Mission Lion’ in his kitty.

Coming back to ‘Rakshabandhan,’ it is presented by Kumar’s sister, Alka Bhatia and Rai. The film is backed by Colour Yellow Production in association with Cape of Good Films.

Anupam Kher says he will never join politics: ‘Question of my joining politics does not arise’