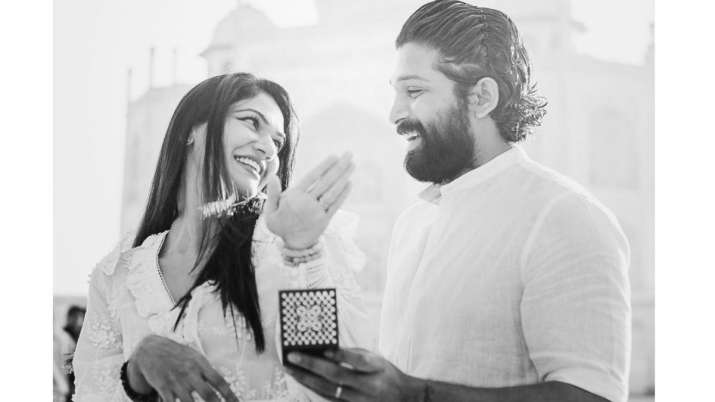 Allu Arjun has wished his wife Sneha Reddy on her 37th birthday. he shared an adorable family picture to extend heartfelt birthday wishes to his ‘cutie’. This is indeed cuteness overloaded. The picture featured their children Ayaan and Arha. Arjun addressed his wife as ‘cutie’ in the caption, drawing some love from their fans. In the picture, both Allu and Sneha can be seen twinning in blue, him in a kurta and her in a suit. Sneha held her kids while posing for the camera. Their son Ayaan held a plate of cake.

Sharing the photo on Instagram, Allu Arjun wrote for Sneha, “Happy Birthday Cutie” (Smiling face with hearts). One of his fans wrote for his wife, “Happy birthday to you. Enjoy your day. Always stay happy, don’t forget your smile”.  Another fan commented, “Their bond is so pure.” Many fans dropped hearts and cake emojis for Sneha.

Being the family man that he is, Allu Arjun makes sure to take some time off from work to be with his wife and kids. A few days back, Sneha shared an adorable photo of her husband with their daughter Allu Arha. The picture showed the father-daughter duo playing chess. Before that, a video capturing yet another special moment between the father and the daughter had caught netizens’ eyes. In the said clip, Allu Arjun can be heard repeating his daughter’s hilarious tongue twisters as he said, “If I correctly answer your question, you think I’m great.” to this, she replied by nodding.

The actor’s last film, ‘Pushpa The Rise’, grossed over ₹300 crores worldwide. The film minted over ₹100 crores from its dubbed Hindi version alone. The film’s sequel, titled, Pushpa: The Rule, will focus on the face-off between Allu Arjun and Fahadh Faasil, who was introduced as the prime antagonist towards the end of the first part. If rumors are to be believed then the shoot will hit the floors in mid-October. “Allu Arjun will start shooting for ‘Pushpa 2’ in mid-October and his new look will be out soon. The star has been taking classes and has been preparing hard for the film,” a source close to the makers said.

Also Read: Drishyam 2 teaser OUT: Ajay Devgn aka Vijay Salgaonkar and family are back | Watch video