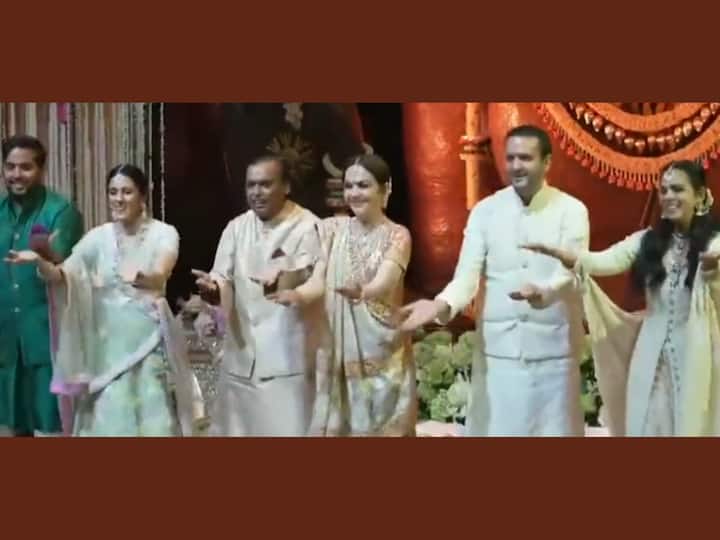 New Delhi: The Ambani family staged a dance performance to celebrate Anant Ambani’s engagement to Radhika Merchant, the daughter of industrialist Viren Merchant. A video of their performance is doing the rounds on the internet and netizens can’t keep calm.

In the video, Mukesh and Nita Ambani are at the centre of the dance, along with their elder son Akash Ambani, his wife Shloka Mehta, daughter Isha Ambani and her husband Anand Piramal beside them. They danced to a version of ‘Wah Wah Ramji’ from the film ‘Hum Apke Hain Kaun’, with the lyrics improvised to include the new couple’s names. Anant Ambani was seen in a blue kurta, while Radhika donned a golden lehenga for the ceremony.

The video has been shared far and wide and netizens have left their views in the comments section. While some laughed watching Mukesh Ambani dance, as he seemed to have forgotten the steps, others left really heartfelt comments. One of them wrote, “They have managed to keep the traditions and culture so live in their family in spite of being billionaires. Their bond and warmth shine like a beacon.” Along with this, another one said, “That moment when Mukeshbhai gives blessings at the end, shows how happy as a father he is…”

Not just that, but another small performance was put up by the Ambani family just after the ring ceremony, when Nita and Mukesh Ambani danced to Brahmastra’s Deva Deva, as did other close family members. Everyone in the video was seen shaking a leg to the beat of the song while holding silver and gold heart cut-outs and showering confetti to congratulate the new couple.

The Ambani family is known to stick to their roots and follow their culture and traditions diligently. This was also reflected in the entire engagement ceremony which was full of traditions and rituals and complete with Gujarati customs such as Gol Dhana and Chunari Vidhi.