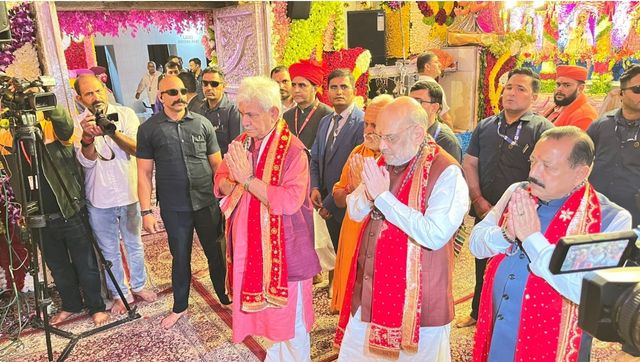 Jammu, Jammu and Kashmir: Union Home Minister Amit Shah, who is on a three-day visit to Jammu and Kashmir, on Monday met people from different communities including Gujjar-Bakarwal, Rajput, Pahari and Jammu Sikh Community.

During his visit to the Union Territory, the Home Minister will review the security situation, attend public meetings and lay the foundations of various development projects.

Shah will hold a couple of meetings with the leaders of the J-K unit of the BJP today.

However, he will make a special visit by offering prayers in the Mata Vaishnodevi Temple on October 4 morning, which will be his first visit to the holy shrine after being appointed as the Union Home Minister.

This visit will be on the 9th day of the ongoing Navaratri festival.

He will later address a public meeting at Rajouri around one-and-half hours after visiting the Vaishno Devi temple.

The Minister will further launch development projects and also lay foundation stones for various projects at Convention Centre in Jammu.

Shah will then hold a public meeting in Rajouri and offer prayers at the Raghunath Temple in Jammu.

He will also inspect various developmental projects in Jammu before proceeding to the Kashmir valley. Later in the evening, the Home Minister will hold a number of crucial meetings including the ones regarding the security situation in the region.

On the second day of his visit on Wednesday (October 5), Shah will review the security situation in Jammu and Kashmir at a meeting that is slated to be held at Raj Bhavan in Srinagar.

Lieutenant Governor of Jammu and Kashmir Manoj Sinha, top officials of the Army, paramilitary forces, state police and civil administration will take part in this high-level meeting expected to begin at 10 am.

The Minister will later address a public meeting here at Baramulla around 11.30 am and will address the gathering.

Before concluding his visit to the Union Territory, Shah will also launch and lay foundation stones for various development projects in Srinagar around 3.30 pm.

Various programmes have been scheduled to take place during his visit to the valley including the ones which will be held by communities like Bakarwal and Gujjars to honour Shah on behalf of the Modi government for working for the welfare of these communities.

In a surprising move, the Modi government recently nominated Ghulam Ali to the Rajya Sabha. Ali joined BJP in 2008 and hails from the Gujjar tribe.

Several organisational meetings are on the cards too including the state core group meeting and meeting with party MPs and MLAs.

This is the second visit by Amit Shah to Jammu and Kashmir since the abrogation of article 370 by the Modi govt in August 2019.