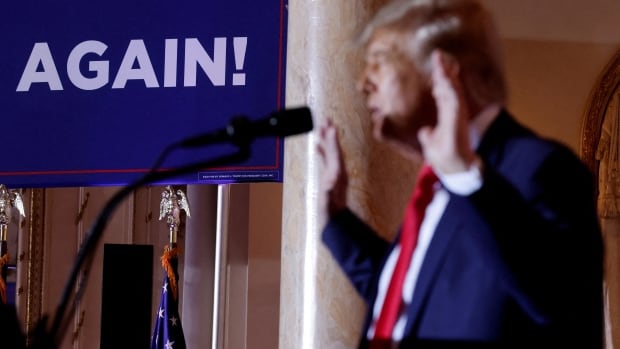 Donald Trump’s presidency subsisted in the cold shadow of a special counsel’s investigation. Now his presidential campaign will do the same.

The former federal prosecutor will be taking over two ongoing criminal investigations involving the ex-president and his probe will hover over Trump’s just-announced political comeback.

The U.S. Department of Justice announced Friday that it has appointed Smith in an effort to avoid accusations of political bias, now that Trump is a political candidate again. He launched his latest run for the White House on Tuesday.

One case against him involves efforts to overturn the 2020 election; the second involves Trump’s handling of classified documents and potential obstruction of justice.

“There’s never been anything like this in American history,” Ben Gershman, a former corruption prosecutor in Manhattan, told CBC News after the announcement, referring to a criminal probe of an ex-president.

“We are writing on a clean slate.”

Based on what’s publicly known, Gershman predicts indictments within months, then a year-long pretrial period, with trials starting around the summer of 2024.

Right in the heat of a presidential election.

Some other legal analysts weighing in Friday made similar predictions. Even Trump’s former attorney general, Bill Barr, said he believes his old department likely has evidence to lay legitimate charges against Trump.

One former federal prosecutor said this development is more serious than Trump’s past legal troubles. Renato Mariotti, who was a Democratic state-level candidate in Illinois after his prosecutorial career, tweeted that he never expected charges against Trump in the Mueller probe and remains skeptical of charges related to the Jan. 6 insurrection.

14/ What it signals to me is that an indictment of Trump is likely.<br><br>I don’t say that lightly. During the Mueller investigation, I said that his report would disappoint Trump’s critics. I didn’t think the “extortion” of Ukraine was prosecutable. I’m skeptical of 1/6 charges.

But the documents case, he says, is different — easier to prove.

He says Garland would not be appointing a prosecutor unless he saw an indictment of Trump as a likely, or at the very least significant, possibility.

Will outsourcing the probe lower the political temperature?

The criticism will come. It will be fanned by pundits and politicians. Sen. Ted Cruz has already called it political weaponization of the Justice Department. Fellow Republican Rep. Marjorie Taylor Greene wants her party’s new congressional majority to cut off funding to the Department of Justice.

Some have already begun attacking Smith’s record over a past case against a Republican governor, and in an IRS scandal that enraged Republicans at the time.

The mere search of Trump’s Florida home for those classified documents unleashed a wave of online threats over the summer — and that was without any charges being laid during an election campaign.

Former U.S. president Donald Trump has announced he is running for the job again in 2024. He is the first Republican to announce his candidacy.

Just this week, Trump decried an alleged Department of Justice/FBI vendetta against him.

“I am a victim, I will tell you. I am a victim,” he said in his residence, Mar-a-Lago, during his 2024 presidential campaign launch.

The political effect of another special counsel is impossible to gauge.

Could Smith’s investigation help Trump? His bounce in support among Republicans after the Mar-a-Lago raid suggests it could.

Could it hurt Trump? Perhaps. Some Republicans are already seeking a safer, less drama-prone candidate for 2024 amid his poorer polling numbers lately in a hypothetical nomination matchup against Florida Gov. Ron DeSantis.

It’s worth noting the U.S. Constitution does not forbid someone running for president if they’re under criminal indictment.

On Friday, in reaction to the latest news, Trump suggested he would not co-operate with the investigation.

Given the explosive politics at play, Gershman says, the attorney general did the right thing by turning the cases over.

He says it might neutralize some criticism, and that he also believes it could have a positive effect on a jury should charges ever be laid.

Gershman says finding an impartial jury for any Trump trial would be monumental. But that jury would likely have heard news reports that the case was brought by an independent prosecutor, rather than by the Biden administration itself.

“If they do pull the trigger [on charges], there’s going to be shouting and shrieking and hysteria,” he said.

“I see [Garland] as being very, very careful.”

After two years, and dozens of indictments, Mueller neither exonerated nor charged Trump.

Smith is now headed home from Europe, where he’s a specialist prosecutor in a case involving atrocities committed in Kosovo. He’s previously worked at the International Criminal Court and in various prosecutorial roles in the United States.

Just weeks ago, he delivered the closing arguments in the case against a Kosovo Liberation Army commander accused of torturing and killing detainees in the 1990s.

“Accountability has no expiration date,” Smith told the court. “And the rule of law matters.”