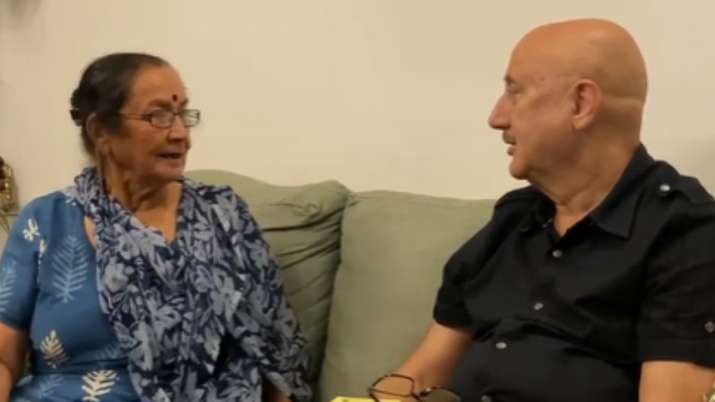 Bollywood veteran actor Anupam Kher often shares delightful videos of his mother Dulhari on his social media platform. Recently, he shared a video in which he can be seen interacting with her. Anupam got his mom a beautiful bag for her from the US. In the video, she also asked him about her daughter-in-law Kirron Kher’s health.

In the latest video, Anupam asked her mother to pose with the new bag. As she walked like a model, she said, “Kaise ho? Theek thaak ho? Aap saare theek ho? Meri Kirron kaisi hai”. He also told her that she has admirers all over the world, and recalled how even Americans and Europeans asked about her when he was in the US. She also agreed to Anupam and said that even with a mask on, people recognise her.

He captioned the post, “Mom walked like a model Dulari liked the new bag I got her from US. But was not happy with just RS.500 in it! But when I reluctantly asked her to walk with the bag like a Model. She happily not only obliged but did some additional acting also. She has no idea how popular she is! Even though she says that people recognise her with a mask on. And that is the most innocent part of life.  Video shot by @pranit.kher ! #DulariRocks #MomsAreTheBest #LoveYourParents #Innocence”.

Anupam’s wife Kirron Kher, was diagnosed with cancer recently. Anupam took to Twitter to conform the update, “Just so that rumours don’t get the better of a situation, Sikandar and I would like to inform everyone that Kirron has been diagnosed with multiple myeloma, a type of blood cancer. She is currently undergoing treatment and we are sure she will come out of this stronger than before. We are very blessed that she is being looked after by a phenomenal set of doctors. She’s always been a fighter and takes things head on.”

Recently, Anupam Kher has been conferred with an honorary doctorate in Hindu studies by the Hindu University of America. The Florida-based university conferred upon Kher the Degree of Honorary Doctor of Philosophy in Hindu Studies.

On the work front, Anupam has many projects in his kitty. ‘Shiv Shastri Balboa’, ‘The Last Show’, ‘Mungilal Rocks’, and ‘The Kashmir Files’. Recently, he won the Best Actor award at the New York City International Film Festival for his short film titled ‘Happy Birthday’.