Home Entertainment Movie Masala Anushka Sharma is back to work months after welcoming daughter Vamika with... 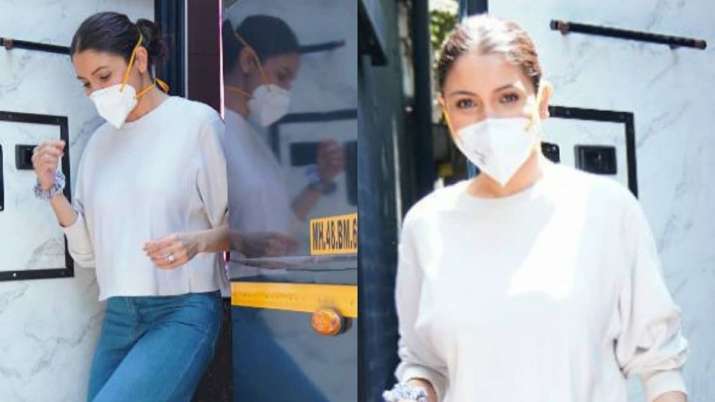 Bollywood actress Anushka Sharma, who just welcomed her daughter Vamika with her cricketer husband Virat Kohli is back to work. The actress was spotted in Mumbai as she stepped out to complete her work commitments. Pictures of Anushka stepping out from her vanity van have gone viral on social media and fans can’t stop admiring the new mommy. In the pictures, Anushka looks fit and the post pregnancy glow was certainly unmissable.

The actress was papped in a comfortable outfit as she wore flared denim jeans and a white quarter sleeve top. She kept her tied in a neat pony and completed her look with white sneakers. Check out her pictures:

Anushka Sharma gave birth to her daughter Vamika on January 11. The actress recently introduced her daughter infront of the world with an Instagram post.

Anushka shared a photograph of herself along with husband Virat Kohli where she is holding the baby and wrote: “We have lived together with love, presence and gratitude as a way of life but this little one Vamika has taken it to a whole new level! Tears, laughter, worry, bliss – emotions that have been experienced in a span of minutes sometimes! Sleep is elusive but our hearts are so full of love. Thanking you all for your wishes, prayers and good energy.”

On the work front, the actress was last seen in Zero. While she hasn’t announced her next project yet, Anushka has been the executive producer of the critically acclaimed web series Pataal Lok. It premiered on Amazon Prime Video. Apart from this, she also produced Netflix film Bulbbul starring Tripti Dimri in the lead role alongside Avinash Tiwary, Paoli Dam, Rahul Bose and Parambrata Chattopadhyay in the supporting roles.