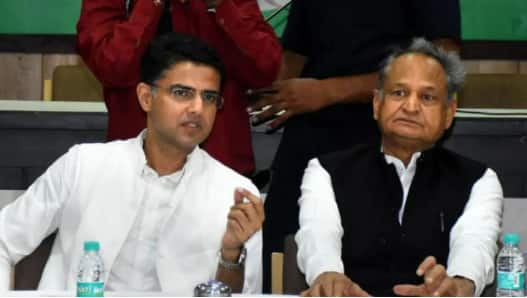 New Delhi: Amid the Rajasthan crisis, interim Congress President Sonia Gandhi has decided to maintain the status quo in the state till the nomination process for party chief polls is over. The political drama in Rajasthan has made the Congress leadership think about a plan B for the top party post, for which Chief Minister Ashok Gehlot was being seen as a contender. Since Kamal Nath has ruled out opting for the top post, the party has now options like Mukul Wasnik, Mallikarjun Kharge or Kumari Selja, etc. The election process has started and September 30 is the last day of nomination.

Rajasthan Chief Minister Ashok Gehlot, a frontrunner for the party’s top post just days ago, is now out of the race. Congress sources told IANS that Gehlot was being ruled out from the Congress` president and it is likely that Kumari Selja from Haryana could be considered for the top post. Rahul Gandhi`s choice, however, is said to be KC Venugopal.

Earlier, Gehlot loyalist Shanti Kumar Dhariwal accused Ajay Maken, AICC in-charge for Rajasthan, of being involved in a conspiracy to remove Ashok Gehlot as chief minister and alleged he was canvassing for Pilot. The MLAs favouring Gehlot indicated that they were against the appointment of Sachin Pilot, who led a rebellion against Gehlot in 2020, to the CM post. Notably, Kharge and Maken are likely to submit their report to Sonia Gandhi about the crisis in the party’s state unit by Wednesday.

Amid the ongoing political drama in Rajasthan, here are the top developments.

1-  Amid open rebellion by MLAs close to Rajasthan Chief Minister Ashok Gehlot, Congress President Sonia Gandhi had on Monday sought a written report on the revolt in Rajasthan from party observers Mallikarjun Kharge and Ajay Maken as the chances of Ashok Gehlot becoming the party chief receded and other names cropped up for the post.

2- Kharge and Maken, who were sent as observers to Jaipur for a Congress Legislature Party (CLP) meeting, briefed Gandhi after their return to Delhi and termed the parallel meet held by Gehlot loyalists as “indiscipline”. These two leaders are expected to recommend disciplinary action against those behind the move, including minister Shanti Dhariwal and Rajasthan Congress chief whip Mahesh Joshi.

3- In an apparent bid to put pressure on the central leadership to pick someone from the Gehlot camp as CM if the veteran leader is elected the party president, Ashok Gehlot loyalists submitted resignation letters to Assembly Speaker C P Joshi on Sunday evening. They indicated that they were against the appointment of Sachin Pilot, who led a rebellion against Gehlot in 2020, to the post.

4- Gehlot loyalist Dhariwal on Monday accused Ajay Maken, AICC in-charge for Rajasthan, of being involved in a conspiracy to remove Gehlot as chief minister and alleged he was canvassing for Pilot.

5- After a nearly one and a half hour-long meeting with Gandhi, Maken told reporters on Monday that it was “unfortunate” that the CLP meet could not be held.

AICC General Secretary-Organisation K C Venugopal was also present during the meeting with Gandhi. Accusing the MLAs in the Gehlot camp of “indiscipline”, Maken said their demand for setting conditions for a resolution authorising the party president to pick the next chief minister was a “conflict of interest”.

7- Congress sources said 82 MLAs loyal to Gehlot are likely to hold another meeting to decide their next course of action. They say they want someone who stood with the Congress government during the political crisis in Rajasthan in 2020 to be the next CM. In July 2020, Sachin Pilot and 18 other party MLAs had rebelled against Gehlot’s leadership. The Congress has 108 MLAs in the 200-member Rajasthan Assembly.

8- In the latest developments, Congress treasurer Pawan Kumar Bansal has taken a nomination form from the party`s Central Election Authority, sources told IANS on Tuesday. It was, however, not clear whether he will file the nomination or not. Madhusudan Mistry, Chairman of the CEA said, “Till now Tharoor and Pawan Bansal have taken the nomination forms from CEA.”

9- In the current scenario, Ashok Gehlot now has a few options before him. Firstly, he can officially withdraw from the Congress’ presidential race and stay on as the chief minister of Rajasthan. Secondly, he can contest the election to choose the Congress chief after getting a consensus candidate of his choice in Rajasthan to take over if he does become the party chief.

10- Amid the crisis in the Congress camp in Rajasthan, BJP has adopted the wait and watch policy while underlining the doors of the party are open for former Deputy Chief Minister Sachin Pilot. Both the state`s BJP unit president and Deputy Leader of Opposition submitted that the Speaker should have accepted the resignations being given by several MLAs loyal to Ashok Gehlot over a possible move to appoint Sachin Pilot as the next CM.