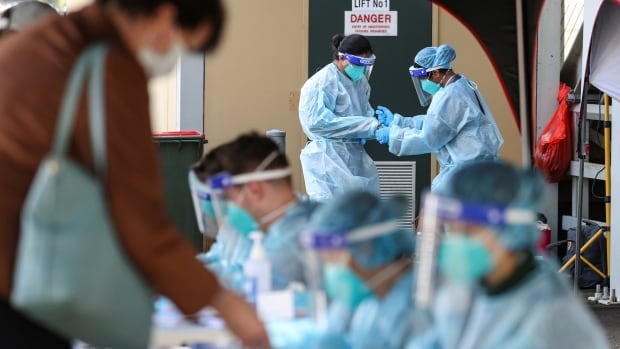 Australia recorded its biggest one-day rise in COVID-19 deaths on Monday although a slowdown in new cases gave hope that a second wave of new infections in the state of Victoria may have peaked.

Nineteen people died from the virus, all in Victoria, in the past 24 hours, a national daily record. However, only 337 people were diagnosed with the coronavirus that causes COVID-19 across the country, the lowest one-day rise since July 29, officials said.

“This is an agonizing day for the … 19 families who have lost a loved one to COVID-19 today,” Michael Kidd, Australia’s deputy chief medical officer, told reporters.

“We are now seeing the first promising signs of a significant decline in the number of cases.”

The slowdown in new cases comes more than a month after the nearly five million residents of Melbourne, the capital of Victoria, were told to stay home, and a week after most businesses in the country’s second-largest city were ordered to close in an attempt to slow the spread of the virus.

Thousands of anti-mask demonstrators filled the streets of Montreal on Saturday, demanding the right to personal freedoms and criticizing Quebec’s pandemic response. 2:21

With about 21,000 coronavirus cases and 314 deaths, Australia has still recorded fewer infections and fatalities than many other developed nations. The spread of the virus is limited to the two largest states, Victoria and New South Wales.

Desperate to contain the outbreak, Australia’s states and territories have closed their borders and slowed a timetable to remove remaining physical distancing restrictions. Victoria will continue in a hard lockdown for at least another five weeks.

Physical distancing restrictions have devastated Australia’s economy. Unemployment is expected to peak at 14 per cent this year as the country enters its first recession in nearly three decades.

The government last week pledged to expand its wage subsidy scheme by $16.8 billion Aus ($11.4 billion Cdn) amid the Victorian outbreak, prompting some criticism that the cost to the government was too high.

But Morrison said the alternative was unthinkable.

As of 5 a.m. ET on Monday, Canada had 119,451 confirmed and presumptive coronavirus cases. Provinces and territories listed 103,728 of those as recovered or resolved. A CBC News tally of deaths based on provincial reports, regional health information and CBC’s reporting stood at 9,017.

Ontario marked a significant achievement in its COVID-19 fight this past week. In each of the past seven days, the province recorded fewer than 100 new cases of the novel coronavirus.

Nonetheless, medical experts say people should remain vigilant in protecting themselves and others against the coronavirus.

Ontario pediatrician Dr. Kulvinder Gill is the subject of complaints from fellow doctors who accuse her of spreading misinformation about COVID-19 on Twitter. Gill says she is being defamed and censored. 2:19

“Complacency is something we’ll always have to worry about and make sure that people realize that COVID’s still there,” said Dr. Sumon Chakrabarti, infectious diseases physician at Trillium Health Partners in Mississauga.

Chakrabarti said with bars, restaurants and gyms now open, people are more likely to be grouped together, thus increasing the risk of outbreaks.

“I do expect to see spikes in the numbers, that doesn’t surprise me, but the fact that the overall trend has continued to drop is very, very good,” Chakrabarti said.

There is a “vast global gap” between the funds needed to fight the coronavirus pandemic and the funds committed, World Health Organization Director General Tedros Adhanom Ghebreyesus said on Monday. He said the WHO is only “10 per cent of the way” there.

Infections have been reported in more than 210 countries and territories since the first cases were identified in China in December 2019.

Tedros said the next three months present a “crucial window of opportunity” to scale up the response.

Most of the new cases, including an eight-year-old boy, are linked to the central city of Danang, where the new outbreak began late last month.

The ministry said more than 182,000 people are being quarantined in the country, including 5,139 at hospitals, 28,408 at centralized quarantine centres and the rest at home.

In the United States, a total of nine students and staff at a Georgia high school have tested positive for the coronavirus, the principal said in a letter to parents after the school made headlines for online photos showing hallways packed with teens not wearing masks.

Dr. Christopher Labos says there is little value in testing every child for the coronavirus before school starts and he speaks to concerns about keeping kids apart in the classroom. 5:43

A well-known Hindu temple in India has seen more than 700 cases of the novel coronavirus among its staff in the past two months, a temple official said on Monday.

India reported a near-record 62,064 new cases of the virus in the past 24 hours, according to federal health data released on Monday, taking its total number of cases to more than 2.2 million.

Cases in India have been spreading from urban areas to smaller towns and the countryside, where health infrastructure is already over-burdened.

New Zealand marked 100 days without a domestic transmission of the coronavirus on Sunday, but warned against complacency as countries such as Vietnam and Australia, which once had the virus under control, now battle a resurgence in infections.