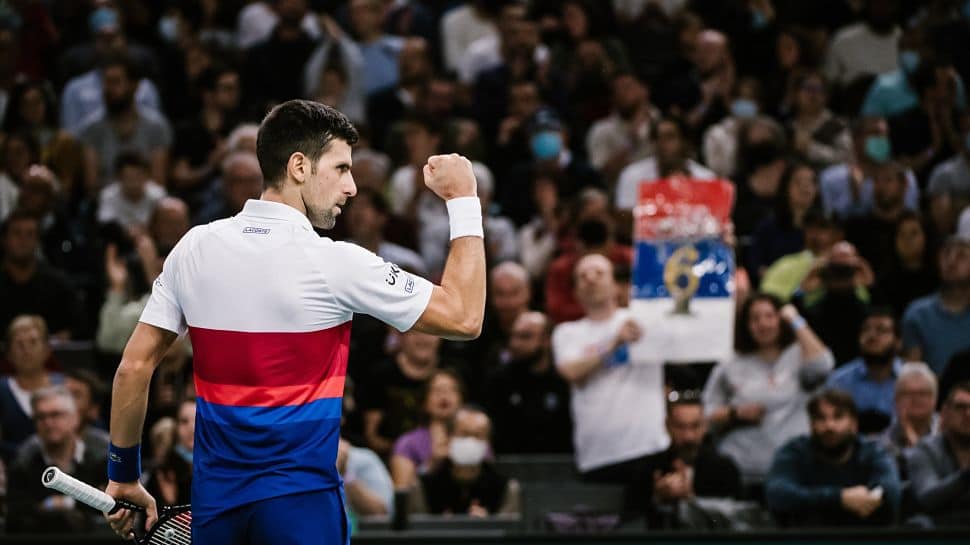 Novak Djokovic landed in Australia on Wednesday in the middle of a political maelstrom over his COVID-19 vaccine status, as a visa dispute added a new twist to the world number one`s attempt to play in the Australian Open.

Djokovic, who has won nine titles at Melbourne Park including the last three, confirmed on Tuesday that had received a vaccination exemption to allow him to bid for a record 21st major title at the Australian Open, which starts on January 17.

There are 1000s of people – fully vaccinated – who haven’t been able to get to see family members and loved ones in Australia because of travel restrictions still in place. But someone who refuses the vaccine is granted an exemption. Odd messaging. #Djokovic https://t.co/t3Gx1hOpXb

His announcement that he had received a medical exemption to play provoked outrage in Melbourne, which has endured the world`s longest cumulative lockdown and where an outbreak of the Omicron variant has sent case numbers to record levels.

Prime Minister Scott Morrison had already suggested Djokovic`s participation was not a done deal and he would have to satisfy the federal government, which has responsibility for international borders and visas and was not part of the exemption process.

And Australian media reported that he had now been held up by a visa error after landing.

The Age newspaper said the federal Border Force had contacted the Victoria state government asking if it would support his application after his team applied for the wrong kind of visa.

While not confirming the reason, acting Victoria Sports Minister Jaala Pulford said: “The Federal Government has asked if we will support Novak Djokovic’s visa application to enter Australia.

Such a slap in the face to the Australian people to allow #Djokovic a vaccine exemption after what so many people endured here over the past two years. Australians weren’t even allowed to come home from overseas but apparently if you’re rich and famous, the rules don’t apply

“We will not be providing Novak Djokovic with individual visa application support to participate in the 2022 Australian Open Grand Slam.”

It was not clear whether the federal government would allow his entry. The Border Force could not be reached for comment.

Morrison said earlier there would be “no special rules” for Djokovic on his exemption.

“If that evidence is insufficient, then he won`t be treated any different to anyone else and he`ll be on the next plane home,” Morrison told a media conference.

Tennis Australia and government officials moved quickly to stress that Djokovic, who has said he is opposed to COVID-19 vaccinations, had received no preferential treatment.

Australian tennis great Rod Laver, after whom the main showcourt at Melbourne Park in the state of Victoria is named, warned that Djokovic might face hostility from the local crowd.

“I think it might get ugly,” Laver told News Corp. “I`d think the Victorian people would be thinking `Yes I`d love to see him play and compete but at the same time, there`s a right way and a wrong way.`

“Yes, you`re a great player and you`ve performed and won so many tournaments, so it can`t be physical. So what is the problem?”

Melbourne local Christine Wharton said it was a “disgrace”.

“We`ve all done the right thing, we`ve all gone out and got our jabs and our boosters and we have someone that`s come from overseas and all of a sudden he`s been exempt and can play and I think it`s an absolute disgrace and I won`t be watching it.”

Organisers Tennis Australia have stipulated that everyone at Melbourne Park must be vaccinated or have a medical exemption granted by an independent panel of experts.

With the exemption, Djokovic will not be required to quarantine and will enjoy the same freedoms in Melbourne as someone who is vaccinated.

Tennis Australia chief executive Craig Tiley said the independent panel consisted of doctors from the fields of immunology, infectious disease and general practice and all exemptions met conditions set out by the Australian Technical Advisory Group on Immunisation.

“We completely understand and empathise with … people being upset about the fact that Novak has come in because of his statements over the past couple of years around vaccination,” he told reporters.

“It`ll certainly be helpful if Novak was to explain the conditions in which he`s sought an exemption … but ultimately it`s up to him,” he said.

Playing will give Djokovic the chance to nose ahead of Rafa Nadal and Roger Federer, who also have 20 Grand Slam crowns.

In a social media post on Tuesday Djokovic said “Let`s go 2022” alongside a picture of himself at an airport as he confirmed he was heading to Australia with the exemption.

The decision has drawn a mixed reaction from players.

“I think it`s a tough one. As we`ve seen a little bit in the last day or so, from the Australian public, I know how hard it has been for Australians … but in particular Victorians have had a real rough trot over the last 18 months and two years,” Australia`s Ash Barty, women`s number one, said.

I don’t understand why @DjokerNole is getting so much hate for his vaccine exemption. He’s within the rules, and the government could have said no but they didn’t.

American doubles specialist Nicole Melichar-Martinez tweeted: “I don`t understand why @DjokerNole is getting so much hate for his vaccine exemption. He`s within the rules, and the government could have said `no` but they didn`t.”