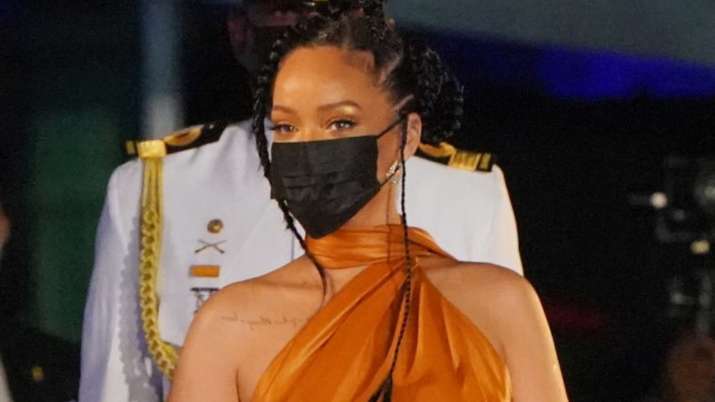 Fireworks peppered the sky at midnight as Barbados officially became a republic. The island nation stopped pledging allegiance to Queen Elizabeth II on Tuesday as it shed another vestige of its colonial past and became a republic for the first time in history. Several leaders, dignitaries and artists, including Prince Charles and Rihanna were present on the occasion. During the ceremony, prime minister Mia Mottley announced that pop singer Rihanna would be conferred with the honour of National Hero of Barbados. As the 33-year-old was awarded the honour of National Hero of Barbados, Mottley told her, “May you continue to shine like a diamond.” Mottley was referencing Rihanna’s 2012 chart-topping single “Diamonds”.

Netizens are lauding and congratulating Rihanna for the honour. “Congratulations to The Right Honourable Robyn Rihanna Fenty. She’s officially a National HERO!” wrote a user on Twitter. Another said, “Rihanna went from singing ‘Hero’ by Mariah Carey to becoming a national hero of Barbados. So proud.” Sample some of these tweets.

Barbados became independent from the United Kingdom in November 1966, more than three centuries after English settlers arrived and turned the island into a wealthy sugar colony based on the work of hundreds of thousands of African slaves.

In recent decades, the island has begun distancing itself from its colonial past. In 2005, Barbados dropped the London-based Privy Council and chose the Trinidad-based Caribbean Court of Justice as its final court of appeal.

Then in 2008, it proposed a referendum on the issue of becoming a republic, but it was pushed back indefinitely.

Last year, Barbados announced plans to stop being a constitutional monarchy and removed a statue of British Vice-Admiral Horatio Nelson from National Heroes Square, the location of the event to celebrate becoming a republic.

Barbados’ flag, coat of arms and national anthem will remain the same, but certain references will change, according to Suleiman Bulbulia, a columnist for the Barbados Today newspaper.

“It is the beginning of a new era,” he wrote. “Any Barbadian can aspire now to be our Head of State.”

Celebrating 16 years of Rang De Basanti with THESE powerful dialogues of Aamir Khan, R Madhavan & others

Evelyn Sharma on being trolled for breastfeeding photos: Why be shy?