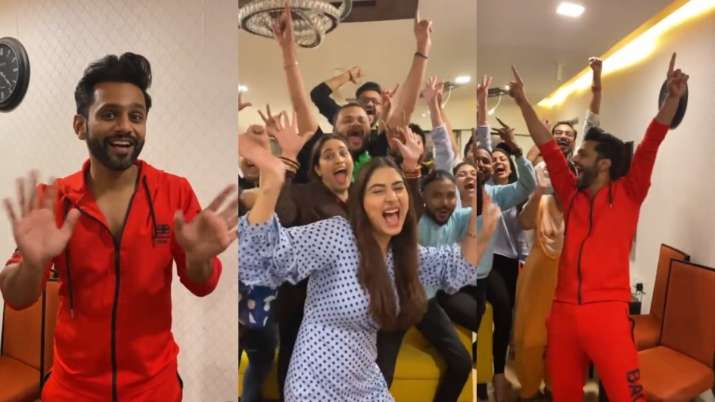 ‘Pawri’ abhi chalegi! Many celebrities joined the ‘Pawri Hori Hai’ trend after Pakistani influencer and content creator Dananeer Mobeen’s video went viral. Bigg Boss 14 runner-up Rahul Vaidya who is currently soaking in the love of his fans and followers joined the ‘pawri ho rhi hai’ viral trend. Rahul took to his Instagram and shared a fun video. He can be seen partying with his ladylove Disha Parmar, close friends, and family.

Just like the original song, Rahul in the video can be seen introducing himself as “Yeh main hun” followed by, “Yeh mera ghar hai” and with his friends and family in the background, the singer added, “Aur yhaan Pawri ho ri hai.”

Earlier, Bigg Boss 14 contestant and actor Abhinav Shukla who was rooting for his wife Rubina Diliak after his eviction also shared a video with a Bigg Boss twist. The actor wrote, “Pawrty ho rahi hai ? #voteforrubina”

In the video, Abhinav can be seen saying “dosto yeh mai hoon” pointing towards himself, then bring an apple in the picture, he says “yeh seb hai.” Then pointing towards his mushy picture with wife Rubina, Abhinav declares, “Aur yeh Bigg Boss 14 ki winner hai.”

Singer Rahul Vaidya reached the top two in the grand finale of Bigg Boss 14, and lost out to Rubina Dilaik. He says he is surprisingly not sad that he has not won the controversial reality show. Rahul had a journey of over 140 days in the house. He is happy that reached the final two. The grand finale took place on Sunday night.

“(I am) Very happy. Never had my expectations from the day I entered the show. Just got into playing the game and got appreciated. I reached the top two and surprisingly I am not even sad that I have not won. I am more than happy that I have played the game gracefully and that I am getting back home to my folks and girlfriend,” Rahul told IANS.