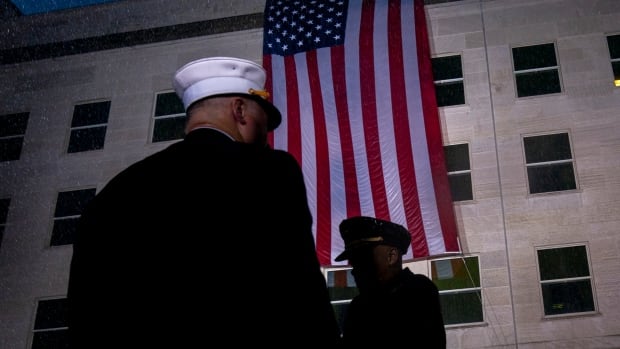 U.S. President Joe Biden marked the 21st anniversary of the Sept. 11 attacks, taking part in a sombre wreath-laying ceremony at the Pentagon held under a steady rain and paying tribute to “extraordinary Americans” who gave their lives on one of the country’s darkest days.

Sunday’s ceremony occurred a little more than a year after Biden ended the long and costly war in Afghanistan that the U.S. and allies launched in response to the terror attacks.

Biden noted that even after the United States left Afghanistan that his administration continues to pursue those responsible for the 9/11 attacks. Last month, Biden announced the U.S. had killed Ayman al-Zawahri, the al-Qaeda leader who helped plot the Sept. 11 attacks, in a clandestine operation.

“We will never forget, we will never give up,” Biden said. “Our commitment to preventing another attack on the United States is without end.”

The U.S. president was joined by family members of the fallen, first responders who had been at the Pentagon on the day of the attack, as well as Defence Department leadership for the annual moment of tribute carried out in New York City, at the Pentagon and in Somerset County, Pa.

“We owe you an incredible, incredible debt,” Biden said.

In Ottawa, Prime Minister Justin Trudeau paid tribute to the nearly 3,000 victims of the attacks, including 24 Canadians, and praised first responders.

On the 21st anniversary of the September 11th terrorist attacks, we remember the nearly 3,000 victims. We offer our condolences to their loved ones. And we thank those who stepped up that day – and in the days that followed – to keep others safe. <a href=”https://t.co/1ZkpT96W54″>https://t.co/1ZkpT96W54</a>

“Twenty-one years ago today, the world witnessed the deadliest terrorist attacks in the history of the United States of America, our closest neighbour and ally,” Trudeau said in a statement. “We offer our condolences to the families and friends who lost loved ones. Our thoughts are also with all those who continue to live with the pain and trauma caused by these horrific events.”

In Gander, N.L., U.S. Ambassador to Canada David Cohen thanked residents for their kindness in taking in thousands of air travellers left stranded by the 9/11 attacks.

“On behalf of the president of the United States, on behalf of the American people, and from the bottom of my heart, thank you for your kindness, for humanity, and for giving us hope and optimism that good will always triumph over evil,” Cohen said on Sunday.

In ending the Afghanistan war, the Democratic president followed through on a campaign pledge to bring home U.S. troops from the country’s longest conflict. But the war concluded chaotically in August 2021, when the U.S.-backed Afghan government collapsed, a grisly bombing killed 170 Afghans and 13 U.S. troops at Kabul’s airport, and thousands of desperate Afghans gathered in hopes of escape before the final U.S. cargo planes departed over the Hindu Kush.

Biden marked the one-year anniversary of the U.S. withdrawal from Afghanistan late last month in low-key fashion. He issued a statement in honour of the 13 U.S. troops killed in the bombing at the Kabul airport and spoke by phone with U.S. veterans assisting ongoing efforts to resettle in the United States Afghans who helped the war effort.

Biden on Sunday said an “incredible debt” was owed to the U.S. troops who served in Afghanistan as well as their families. More than 2,200 U.S. service members were killed and more than 20,000 were wounded over the course of the nearly 20-year war, according to the Pentagon.

He also vowed that the nation will “never fail to meet the sacred obligation to you to properly prepare and equip those that we send into harm’s way and care for those and their families when they come home — and to never, ever, ever forget.”

Senate Minority Leader Mitch McConnell on Thursday criticized Biden’s handling of the end of the war and noted that the country has spiraled downward under renewed Taliban rule since the U.S. withdrawal.

“Now, one year on from last August’s disaster, the devastating scale of the fallout from President Biden’s decision has come into sharper focus,” the Republican from Kentucky said. “Afghanistan has become a global pariah. Its economy has shrunk by nearly a third. Half of its population is now suffering critical levels of food insecurity.”

The president also remembered the words of comfort that Queen Elizabeth, who died on Thursday, sent to the American people soon after the 2001 attacks: “Grief is the price we pay for love.”

Biden said those words remain as poignant as they did 21 years ago but the weight of loss also remains heavy.

“On this day, when the price feels so great, Jill and I are holding all of you close to our hearts,” Biden said.

Biden has recently dialled up warnings about what he calls the “extreme ideology” of former president Donald Trump and his “MAGA Republican” adherents as a threat to U.S. democracy. Without naming Trump, Biden again on Sunday raised a call for Americans to safeguard democracy.

“It’s not enough to stand up for democracy once a year or every now and then,” Biden said. “It’s something we have to do every single day. So this is a day not only to remember, but also a day for renewal and resolve for each and every American in our devotion to this country, to the principles it embodies, to our democracy.”

First lady Jill Biden spoke to a crowd at the Flight 93 National Memorial Observance in Shanksville, Pa., where she recalled the concern she had about her sister Bonny Jacobs, a United Airlines flight attendant.

She said the attacks showed that “with courage and kindness we can be a light in that darkness.”

“It showed us that we are all connected to one another,” said Biden, who was joined by her sister in Pennsylvania for Sunday’s commemoration. “So as we stand on this sacred and scarred earth, a record of our collective grief and a monument to the memories that live on each day, this is the legacy we much carry forward: Hope that defies hate.”

U.S. Vice-President Kamala Harris and her husband attended a commemoration ceremony at the National September 11th Memorial in New York.