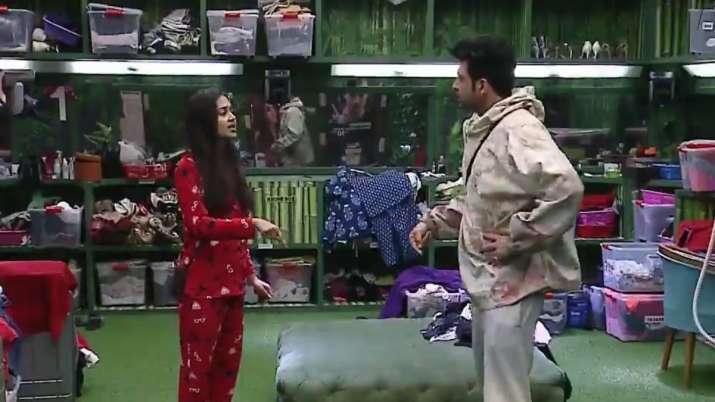 Tejasswi Prakash and Karan Kundrra were seen sorting out their differences in the ‘Weekend Ka Vaar’ episode of ‘Bigg Boss 15’. But it seems their dispute is not coming to an end. In the upcoming episode of Bigg Boss, the relationship between Teja and Karan will seem to face another challenge as the house witnesses the nominations task of this week. Tejasswi Prakash nominates Rashami Desai. Tejasswi nominates Rashami, saying, “I know there are a lot of things going on behind me.” Rashami replies, “If you cannot be loyal to your partner, what can be expected from you.”

Tejasswi replies that no need to come between her and Karan, while Rashami asserts that she will say whatever she is willing to and nobody can stop her.

On the other hand, Umar Riaz nominated Devoleena Bhattacharjee. He says, “She wants other people to act as per her wish. For this, she is using Rakhi Sawant.” Rakhi on the other hand adds, “Devoleena is a strong contestant.”

Rakhi Sawant continues to wield the power of ‘sanchalak’ in the ‘Snowman task’ that leaves everyone annoyed. Pratik targets Umar to keep him out of the game, but Rakhi takes a questionable call by keeping him safe against the rules.

Pratik fights with Rakhi as he is not happy with her biased approach, but Rakhi taunts him by saying he is afraid of Umar. She concludes her argument saying, “My decision is final.”