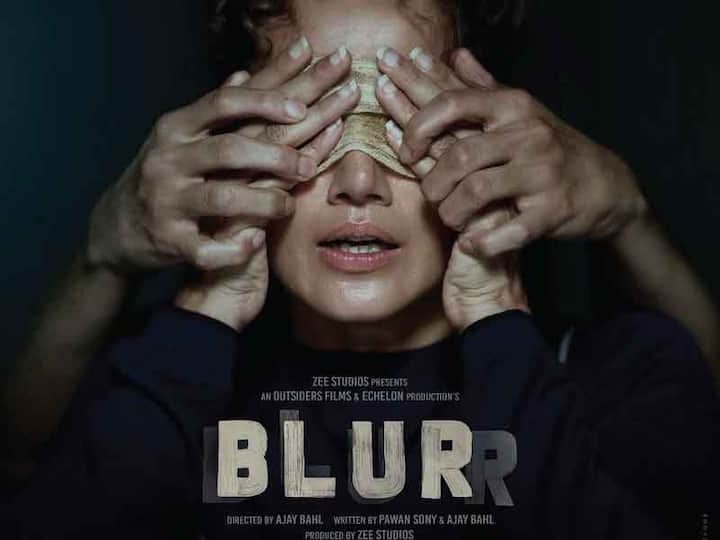 New Delhi: ‘Blurr’ is a suspenseful thriller about a lady dealing with growing eyesight loss. It is well-directed and has a compelling plot and visual flair. In terms of requirements for a thriller, Ajay Bahl’s ‘Blurr’ meets them all. And if anything left, Taapsee Pannu covered everything in her acting.

The story centres on Gayatri (Taapsee Pannu), who lives in the hills of Uttarakhand, is searching for answers about the death of her identical twin sister Gautami (Taapsee Pannu). Both sisters were suffering from a degenerative eye condition in which a person slowly loses sight. The police are certain that Gautami took her own life because she was depressed about her lost vision. Despite Gayatri’s cautions, cops announced that the Gautami case has been closed, but Gayatri isn’t ready to let them give up on the case.

Neil, Gayatri’s husband (played by Gulshan Devaiah), looks like the main suspect in the mysterious case due to his obvious hesitance. It’s one of those films where the culprit isn’t unmasked until the very last moments. There are twists, turns and a lot of confusion (in a thrilling way of course).

Ajay Bahl cleverly splits the movie in half. While we question the protagonist’s mind, the first half of the film moves quickly and focuses on building up the mystery. Once the film’s visual tone and treatment are in harmony, the director takes us on a roller coaster ride full of unexpected twists. The story takes turns in unexpected ways, keeping the viewers on their toes.

Taapsee Pannu stands out well as a lady whose physical and mental suffering grows progressively throughout the film, despite the film’s overall gloominess. She gives life to a character you can’t help but root for. But Abhilash Thapliyal is the one who really amazes everyone by delving deep into his persona. The movie is much improved by his acting, which gives it a new dimension.

Gulshan, who is widely regarded as one of the best performers, is overshadowed by Taapsee. The filmmakers may have benefited from carving his character and making it more engaging.

There was room for improvement in this two-hour film. Unfortunately, editing rendered an otherwise well-written sequence predictable. Most of the film leans toward the thriller genre, but the filmmakers’ effort to inject some horror in between causes the story to go off in unexpected directions.

Given the many jumps scares and close-ups of the protagonists’ faces throughout the film’s two hours, it’s hard to tell whether ‘Blurr’ is a dark thriller or a horror picture. Those who get easily scared should steer clear of this genre.

All the tension in the film comes from the camera playing the greatest game to reveal and conceal the mystery. That’s why Sudhir K. Chaudhary’s top-notch cinematography deserves praise.

The movie also left us wondering why the murderer used to take pictures, it can be concluded that it was done on purpose to create an eerie, staged effect. The fact that Gautami is a renowned musician and Gayatri is an anthropologist is both irrelevant to the story. While we are briefed on the equation the twins share, the exact nature of the plotting between them was unanswered. It’s weird why the film focused on these specific details.

‘Blurr’ is a Hindi adaptation of the Spanish horror/psychological thriller film ‘Julia’s Eyes’. Although it’s well-executed and has some interesting concepts, it may get tedious to watch after a while.

The movie is now available to watch on Zee5.