Home India Top Story Bok coach on why Dweba starts ahead of Marx: ‘There’s a tactical... 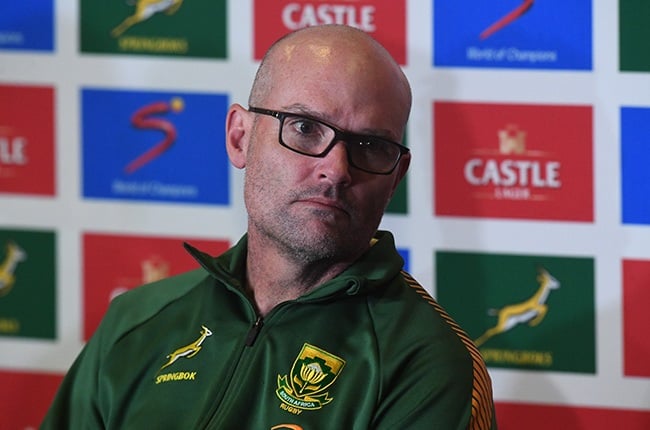 Springbok coach Jacques Nienaber says the reasoning behind Joseph Dweba starting ahead of Malcolm Marx at hooker is a “technical and tactical” decision they discuss with the players and the team.

Dweba, who had a nervy outing against the All Blacks at Ellis Park on 13 August, has again been entrusted with the No 2 jersey for Saturday’s Rugby Championship outing against Australia at the Adelaide Oval (07:30).

Marx, who started the Mbombela Test against the All Blacks and also did well in the following game against the old enemy in Johannesburg, will again feature on the bench.

Nienaber said the players are comfortable with how they do things as a group and nothing is left to chance from a communication perspective.

“We see the starting and bench front rows as units and not necessarily that so and so is number one,” Nienaber said.

“There’s a tactical and technical reason as to why we select them in the way that we do. We wouldn’t like to go into too much detail and give away our game plan.

“There’s a reason for that and the players know it. So long as they know and buy into it, it’s an open and honest discussion in terms of how we do things.

“The players are happy and comfortable with it and so are we.”

Nienaber’s choice of starting hooker for the All Blacks Test, and the timing of the Dweba substitution in the same game, came under scrutiny.

Nienaber defended his stance, saying there were particular tactical boxes their players needed to tick, and if their said goals are achieved, they are subbed.

Dweba was replaced by Marx in the 30th minute against the All Blacks, while the front-row is generally changed by the 45th minute.

“There are certain tactical boxes that the guys have to tick before the start of a particular Test match and the players know the goals they need to achieve,” Nienaber said.

“If we feel it is the right time tactically, then we’ll make the substitution, but where we’re different from other teams is that we don’t see the starting pack and the bench as two groups.

“We see them as a unit that gives us a tactical advantage.”

Nienaber also said there were certain conversations that they had with players that required them as coaches and management to respect the confidentiality and trust they have built with players.

“When we say privileged things, there are some things that a coach discusses with a player and we ask them if they’d want that discussion to come out in the media. They say no,” Nienaber said.

“They want the conversation to stay between us, and that’s what we call privilege. We want to be as open and transparent as possible, but there are some game-related matters that we don’t want out in the media.

“I may have been wrong to say it was privilege, but it was because those conversations can vary into a lot of things.

“The players will tell you we’re open and honest, but we have to be guarded about our tactics.”