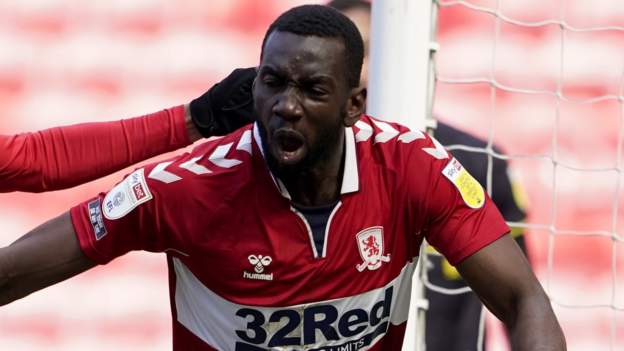 The Hornets went ahead through Ismaila Sarr’s fortuitous opener as the Senegal forward deflected Philip Zinckernagel’s shot from the edge of the box past Marcus Bettinelli.

Duncan Watmore had an equaliser disallowed for offside shortly after half-time, while Joao Pedro twice went close for Watford.

But substitute Bolasie equalised with 12 minutes to go with his side’s first effort on target as his diving header from Paddy McNair’s wide free-kick beat Daniel Bachmann.

Second-placed Watford dropped points for just the second time in 12 games, but they are still 10 points ahead of third-placed Brentford who have two games in hand.

Ninth-placed Boro are six points off the play-off places with all their rivals having at least one game in hand.

Chances were few and far between throughout the match with Zinckernagel and Ken Sema having early efforts off target for Watford as Boro, who lost experienced midfielder Sam Morsy to a knee injury, failed to register a shot on target until Bolasie’s leveller.

Boro only had themselves to blame for Watford’s goal as poor clearances from Jonny Howson and Marc Bola allowed Zinckernagel to get his shot away which was deflected in by Sarr.

Darnell Fisher and Djed Spence played Sarr onside, although Boro felt there was a handball by Zinckernagel in the build-up to his effort.

Watmore thought he had scored for Boro four minutes after the restart as he blocked George Saville’s header with his back before turning the ball past Daniel Bachmann, but the flag went up.

Both defences were on top for much of the match, although Pedro curled a low effort wide of Bettinelli’s far post with 20 minutes to go after a nice passing move.

But it was Boro – who face five sides in the bottom half in their final six matches as they try and make the play-offs- who had the final say as Sema’s foul out wide was punished as Everton loanee Bolasie scored for the first time since joining Warnock’s side in January.

“We knew we had to be spot on with the tactics and I thought we were today, we had to let them have it at times at the back and Duncan Watmore put a right shift in for the time he was on the pitch.

“One or two little errors have cost us big time, but I can’t take my hat off to them enough today, it would have been easy to throw the towel in and feel sorry for ourselves, probably four of our best players are injured now, and I thought we played some good stuff at times today in the right areas.

“I had to laugh with Yannick as he came over to take the free kick and I told him ‘get in the box somewhere’ and he scored.”

“We are a little disappointed because we always want the three points, but it doesn’t matter we need to keep going and work very hard for the next game.

“I think it was a game where we didn’t have a lot of chances, but we had the more clean chance to score.

“We fought today, we gave our best, sometimes when you play against good teams it’s difficult and the most important thing is we took a point and we need to prepare for the next game.”