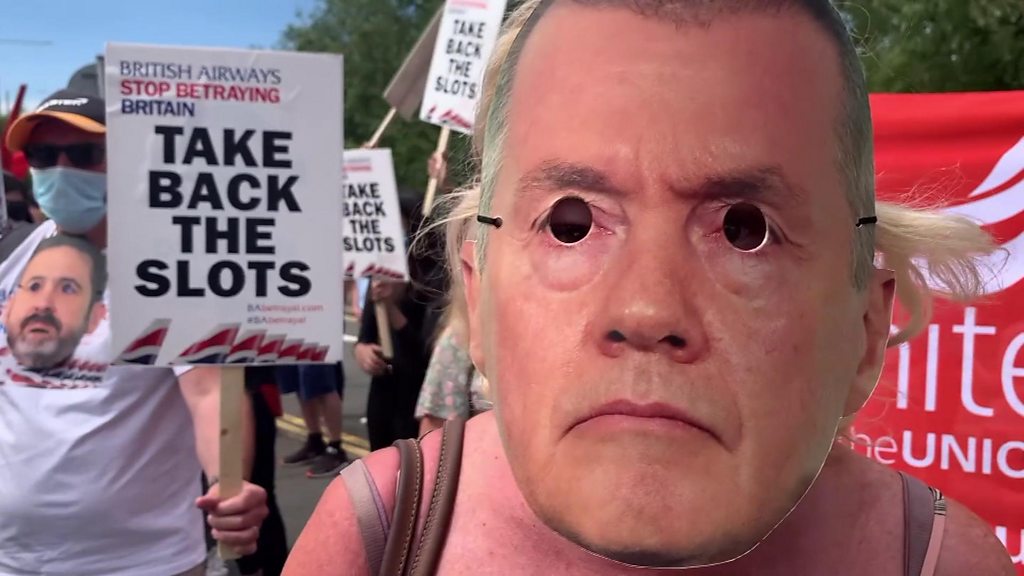 Some British Airways staff who have accepted voluntary redundancy say they had felt “forced” into it.

She says the airline’s conduct was “a slap in the face”.

Carol, who had worked for BA for 23 years, told the BBC: “They [BA] said ‘If you don’t take the offer, you’ll go into the fire-and-rehire phase’, but if we aren’t hired, we’ll get only statutory redundancy.”

Those BA cabin crew who did reapply for their jobs on a new contract are expected to find out later on Friday whether or not they lose their jobs.

Carol, who worked on the long-haul fleet, said it was a foregone conclusion that the airline would not re-hire older cabin crew members.

“Even before I had accepted the voluntary redundancy offer, I had a message on my roster from BA: ‘Thank you for your service. Good luck’. That is all I got from them after 23 years.

“It’s a slap in the face, but it shows they knew who they were getting rid of,” she said. She says she will be forced to sell her home since her redundancy payment won’t cover her mortgage.

“It’s actually age discrimination, we were forced out.”

Erica – again, not her real name – had been with British Airways long enough to remember being cabin crew on a Concorde jet, but accepted voluntary redundancy after seeing the brand airline turn into a “toxic work environment”.

“The way they dealt with this was so underhand,” she said.

“Yes coronavirus has had a terrible impact on the industry, but these are permanent pay cuts to what is a temporary problem. But this is a restructure that BA has wanted for a long time”.

Most of those who are offered a new contract will suffer steep pay cuts, changes to their terms and conditions, and reduced allowances which top up their base salaries.

Other workers such as engineers, ground crew and office staff are also expected to hear whether they have a future at the airline over the coming days.

British Airways says more than 6,000 staff across the business have applied for voluntary redundancy and “refutes claims that our colleagues were pressured”.

The airline has begun culling employee positions as part of a major cost-cutting drive, which it insists is vital to ensure its long-term survival.

But the way in which it has done so has provoked deep resentment among a large proportion of its workforce – and threats of industrial action.

“I’m looking at losing 50% of my take-home pay,” says Vicky – a cabin crew member who works in BA’s long-haul fleet.

“I’m a single mother. I can’t afford to have half of my pay taken away from me”.

Vicky – not her real name – is in her mid-thirties. She has been with the company for more than 15 years.

Although she lives in the north east, she was among hundreds of staff who travelled to BA’s headquarters near Heathrow earlier this week, to vent their anger at the company’s management.

“It’s the most stressful time I’ve ever been through,” she says. “I feel absolutely gutted.”

British Airways, like other airlines, has suffered deeply from the impact of the coronavirus pandemic. In the three months to the end of June it lost more than £700m.

For weeks, at the height of the lockdown, the bulk of its fleet was grounded, and it was unable to operate more than a handful of planes each day.

The company does not expect the aviation industry to recover fully until at least 2023.

Are you a BA employee facing compulsory redundancy? Email haveyoursay@bbc.co.uk.

In April, its parent company International Airlines Group (IAG) announced plans for a major restructuring of BA’s business, which it said could result in up to 12,000 redundancies.

BA then made it clear it needed to cut costs dramatically – and warned that concessions would be needed from remaining staff on pay, as well as on terms and conditions.

It said that if an agreement could not be reached with unions, it would force its plans through – by handing staff their notice, and offering them new contracts on different terms.

Some cabin crew staff have already been informed that they are affected.

Unions have condemned this policy as “fire and rehire”.

It has also been heavily criticised by many MPs, with the chair of the Transport Select Committee, Conservative Huw Merriman, describing it as “the equivalent of putting a gun to someone’s head”.

Despite significant tensions between the two sides, the pilots’ union Balpa has since managed to reach an agreement with BA, which reduced the number of possible redundancies in exchange for significant concessions on pay.

But relations between the company and unions representing other staff – Unite and GMB – have been considerably more strained. No deal has yet been done, and BA has pushed forward with its plans.

Those plans have major implications for BA’s cabin crew.

The company currently has different crew divisions, or “fleets”, which operate as separate units with their own terms and conditions.

It wants to create a single organisation, and put all crew on the same type of contract.

For lower paid staff, principally those who have joined the company since 2010, this would mean a modest salary increase.

For longer serving crew, who are well-paid by industry standards, it would mean a cut in basic salary of 20%. But because they will also lose other allowances, many say they will see their overall take-home wages drop by 40% to 50%.

Executives insist such changes are necessary, in the face of what IAG’s chief executive Willie Walsh described last week as the biggest crisis the airline has ever faced.

Mr Walsh told the BBC: “Anyone who believes that this is just a temporary downturn and therefore can be fixed with temporary measures, I’m afraid seriously misjudges what the industry is going through.”

But many employees believe the company is deliberately exploiting the immediate crisis to justify pushing through far-reaching, irreversible changes.

“I’m just really upset with how things have planned out. I think it’s a permanent solution to a temporary problem. Yet our managers are only taking temporary pay cuts.”

Staff elsewhere in British Airways are also affected by the changes, with the threat of compulsory redundancy hanging over them and the prospect of steep pay cuts ahead.

John – again, not his real name – is an engineer who helps maintain BA’s long-haul aircraft at Heathrow.

He wants to stay in his job, because he is worried his qualifications would not be recognised in other industries and he would struggle to find an employer willing to take him on.

“Let’s be realistic”, he says, “No-one is going to take someone in their 50s and train them up when they can get a 20-something instead. It’s not going to happen.”

John says many of his colleagues are in a similar position – and the worry is proving an unwelcome distraction at work.

“I’ve been walking around checking an aircraft prior to departure, and I find I can’t remember what I’ve been looking at – so I have to do it again,” he says.

“I can’t see how you can be expected to work like that. But this process is being driven by accountants, and they can’t see further than their noses.”

Although BA is still in talks with unions, relations are far from cordial.

Last week the general secretary of Unite, Len McCluskey described the company’s strategy as “despicable”, and said the union was working towards industrial action with immediate effect.

But the airline insists it has no option.

“Our half year results clearly show the enormous financial impact of Covid-19 on our business,” said a spokesperson. “We are having to make difficult decisions and take every possible action now to protect as many jobs as possible.”

“And, while we never could have anticipated being in a position of making redundancies, over 6,000 of our colleagues have now indicated that they wish to take voluntary redundancy from BA.”

Are you BA staff and are you now being made compulsorily redundant from the company? Share your experiences by emailing haveyoursay@bbc.co.uk.