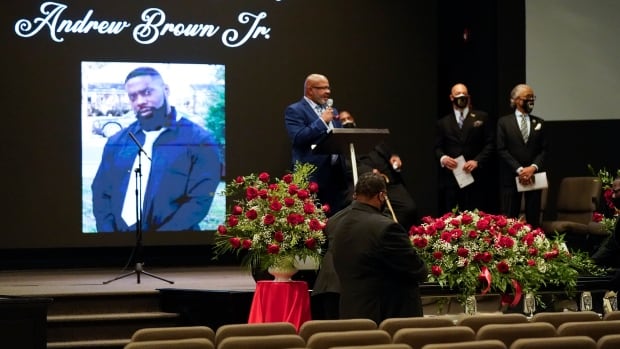 Rev. Al Sharpton issued a powerful call for transparency and the release of body camera footage at the funeral Monday for Andrew Brown Jr., a Black man shot and killed by deputies in North Carolina, likening withholding the video to a “con” job done on the public.

“I know a con game when I see it. Release the whole tape and let the folks see what happened to Andrew Brown,” Sharpton told mourners in a fiery eulogy at the invitation-only service at a church in Elizabeth City, N.C.

“You don’t need time to get a tape out. Put it out! Let the world see what there is to see. If you’ve got nothing to hide, then what are you hiding?” he said, to loud applause.

A judge ruled last week that the video would not be released for another month pending a state investigation into the April 21 shooting of Brown, 42, by deputies attempting to serve drug-related search and arrest warrants.

An independent autopsy commissioned by his family said that he was shot five times, including once in the back of the head. The shooting sparked days of protests in the city in rural northeastern North Carolina.

‘Shot, going away from the police’

Other speakers included Brown’s sons as well as civil rights attorney Ben Crump, who is representing Brown’s family. Calling Brown’s death an “unjustifiable, reckless shooting,” Crump told mourners the legal team would continue fighting for justice and transparency, including the release of deputy body camera footage of the shooting.

A long line of mourners filed into the church, many wearing white T-shirts with Brown’s image and the words, “Say his name.”

In the lobby, a wreath of red and white flowers with a ribbon bearing the message, “Rest in Peace Drew,” referring to Brown’s nickname, stood next to a tapestry with images of him.

As the service started, an ensemble sang songs of praise including You’re the Lifter, while some mourners stood and clapped.

Family members have said that Brown was a  proud father of seven, who was known for entertaining relatives with his stories and jokes.

Brown’s family asked Sharpton to deliver the eulogy because they felt the civil rights leader would properly honour his legacy. Sharpton recently delivered the eulogy for Daunte Wright, who was shot and killed by a police officer in Minnesota.

Among the mourners arriving at the church was 40-year-old Davy Armstrong, who said he went to high school with Brown and lived near him while the two were growing up. He said Brown seemed to be doing well when he ran into him recently before the shooting.

“He was very humble, very generous. He said he was doing good,” said Armstrong, who works in construction. “We hear about this on TV all the time. But when it’s someone so well-known and so respected, it’s pretty painful.”

Rev. Dwight Riddick, a pastor at Gethsemane Baptist Church in Newport News, Va., said he was there to support the family and the cause against Black men being killed by police.

Riddick added that Brown’s killing has caused flashbacks to his own childhood, when he witnessed excessive force by police in Chesapeake. He said several officers arrested his childhood neighbour and close friend, who was Black. His friend later died in prison.

Riddick, now 63, was a teenager at the time. “This is almost like a scab being knocked off of a wound,” Riddick said. “We’ve seen too many African-American males who’ve lost their lives at the hands of police officers and even at the hands of African Americans. We want to see the violence on both sides stop.”

WATCH | Is the guilty verdict for George Floyd’s murder a turning point?

A professor and an anti-police violence advocate discuss whether the guilty verdict in George Floyd’s murder will spark the change in the justice system that many are looking for. 6:32