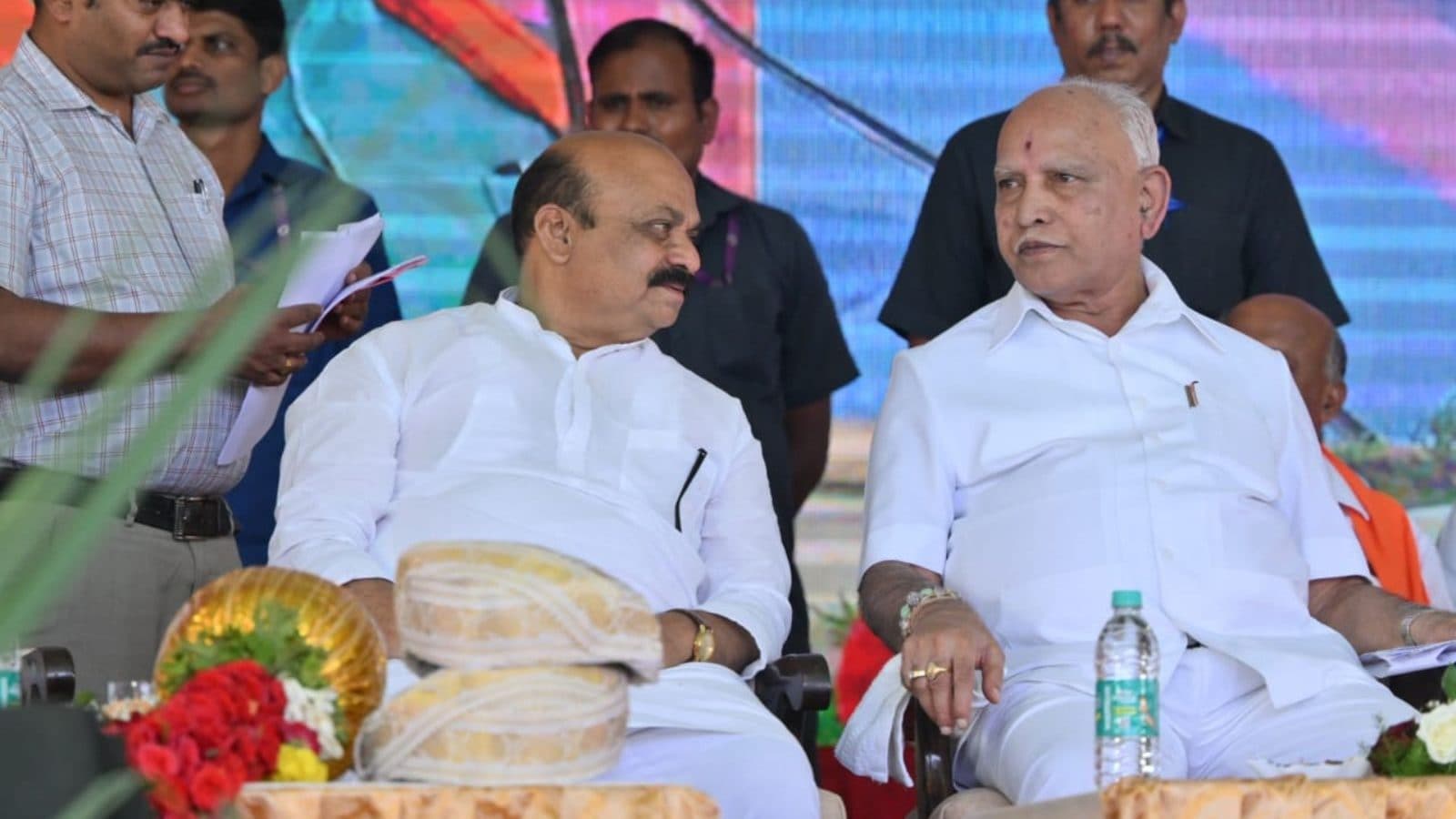 BS Yediyurappa may have been the only chief minister in Karnataka who has been unable to complete any term despite being on the hot seat but he continues to be indispensable for the BJP.

Ahead of the 2023 elections in the state, the top leadership of the saffron party realises that this Lingayat strongman is the most powerful arsenal the party has in Karnataka if they want to come back to power and hence, the BJP is seen heavily banking on the popularity and political wisdom of this four-time chief minister.

The BJP is hopeful of keeping the Lingayat vote bank intact by pacifying an upset and sidelined Yediyurappa, who is the tallest and most influential leader. Lingayats are the single-largest community in Karnataka and comprise close to 17-18 per cent of the state’s voting population.

Though the Lingayats are traditionally BJP voters, this time round, the party is also trying to woo the vote bank in the Old Mysore region which has a strong Vokkaliga population. Vokkaligas are the second-largest community and account for close to 15-16 per cent of the population.

Yediyurappa has a lot of popularity in this region as well. Though he has been elected from Shikaripura in Shivamogga, he is a native of Mandya district in the Old Mysore region.

Ahead of Prime Minister Narendra Modi’s National Youth Festival event in Hubballi on January 12, the media was abuzz with speculations as to why Yediyurappa was not invited to share the stage.

The Karnataka BJP claimed that he was not invited as it was a government event — signalling that all is not well within the state BJP unit. It also made it quite evident that there is an undercurrent against the political strongman. A section of the BJP is also not keen on the former chief minister leading the assembly election campaign for 2023.

A sulking Yediyurappa had sent enough signals to the Centre on feeling sidelined and at times even ignored by the state unit. The prime minister attempted to soothe ruffled feathers by meeting Yediyurappa in Delhi for 15 minutes on the sidelines of the BJP national executive meet on January 17.

The political veteran is said to have spoken about the ‘state of affairs’ in Karnataka and also briefed PM Modi about the Lingayats feeling upset over the promises regarding SC/ST reservations. “Yediyurappa ji also invited the PM to inaugurate the Shivamogga airport next month,” a Karnataka BJP leader told News18.

Yediyurappa, while talking to reporters, also shared how PM Modi stressed the need for taking Muslims into confidence. With several flashpoints such as the Hijab ban, Halal and the anti-CAA movement, the BJP is wary of alienation in the Muslim community. An internal report given to the BJP high command says that several MLAs who won because of Muslim votes are facing a pushback from the community. The party has realised that the communal stand taken by several leaders has not gone down well with the people in the state.

In this context, Yediyurappa’s return becomes even more crucial as he was seen as fair and balanced even during his tenure and can now bring back the confidence of Muslims in the party.

The national leadership appears to have finally realised that Yediyurappa is their ticket to success and the match winner in Karnataka.

Internal surveys conducted by the BJP indicate that the party is strong in 80-85 seats and will have to work hard in the run-up to the elections and this is where Yediyurappa will once again prove to be the big hitter.

The BJP strongman, who will turn 80 this February, was forced out of the chief minister’s chair in July 2021 as per the party’s rule that anyone over the age of 75 years would make way for younger leaders.

Basavaraj Bommai took a tearful Yediyurappa’s place. Under Bommai’s governance, the BJP has been in firefighting mode with the Opposition hitting the ruling party hard with its ‘40 per cent commission’ campaign and scams in the civil works, education, BDA and police departments. BJP insiders say the party high command is not happy with the performance of Bommai.

As the 2023 assembly polls near, the BJP’s top leadership has woken up to the rude reality that Yediyurappa is still the only big weapon in their arsenal.

The core leadership in Delhi attempted to make peace by giving him a seat on the party’s Parliamentary Board. But for Yediyurappa, this was not enough atonement for what he perceived to be his public humiliation.

Being the wily politician that he is, Yediyurappa is sending out signals about his unhappiness, while openly speaking in support of the party. For instance, he skipped a party event led by Union Home Minister Amit Shah, citing that he was abroad. In December, he caused a flutter by refusing to join CM Bommai at a public rally in Koppal district, although he later gave in. The two leaders were to jointly address the BJP’s Jan Sankalp Yatra in 50 constituencies.

“The turnout for BSY’s meetings was really high. Then came the decision that he would also campaign along with state president Kateel-ji. That set the cat among the pigeons,” said a senior BJP leader.

The BJP in Karnataka is now in suspended animation as they wait to see how the detente between Yediyurappa and the high command plays out.

Why Yediyurappa is indispensable for the BJP

The BJP can ill afford to antagonise the Lingayat leader. For one, Yediyurappa played a key role in rallying the tightly knit Lingayat community behind the BJP after the Congress alienated them in the 1990s.

Then Congress president Rajiv Gandhi dismissed an ailing Veerendra Patil, who was Karnataka chief minister at the time, by writing a letter from the airport to the Lingayat leader.

Seen as a callous move, the Lingayat community moved en masse away from the Congress and fell behind the young and firebrand Yediyurappa.

Yediyurappa is credited with literally building the BJP in Karnataka ground up and bringing the BJP lotus to a bloom in 2008 by forming the government with a majority.

Hailing from a family of farmers, he is also seen as the ‘Raitha Nayaka’ or the leader/friend of the farmers in the state.

No other leader in the Karnataka BJP commands the kind of respect and adulation that Yediyurappa does to date.

But with great power also comes the fear of great reprisal. Political analysts say that today, despite his retirement from active politics, Yediyurappa is capable of directly influencing at least 40 seats and indirectly, close to 80 seats.

Yediyurappa needs to be actively involved in processes ranging from candidate selection to campaigning. If he decides to sit back or, worse, actively hamper the BJP’s chances at the hustings, the party will face a death blow.

What will satisfy BSY?

So what will make Yediyurappa happy? Sources close to him tell News18 that he wants a promise of the post of deputy chief minister for his son BY Vijayendra in return for his cooperation.

Vijayendra is the vice-president of the Karnataka BJP and cut his teeth in the savagery of politics as he spearheaded crucial bypoll wins in KR Pete (2019) and Sira (2020). Vijayendra himself is popular among the youth and has a large following across the state.

“Vijayendra is seen as the person who is able to carry on the political legacy of his father. He has been getting a very good response on the ground as well as the youth connect with him. All he now needs is a win,” said a close confidant of Yediyurappa.

The high command is attempting to balance Yediyurappa’s ambitions with the desperate need to win Karnataka after a loss in Himachal Pradesh.

Their nervousness is over how mercurial and powerful Yediyurappa was before his retirement, with the ability to cock a snook at the leadership. The anxiety now is compounded by a worry if the elevation of Vijayendra would create a similar culture in the state.

But the message to the BJP high command is clear. Ignore Yediyurappa at your own peril. The only southern state ruled by the BJP now hangs in the balance.