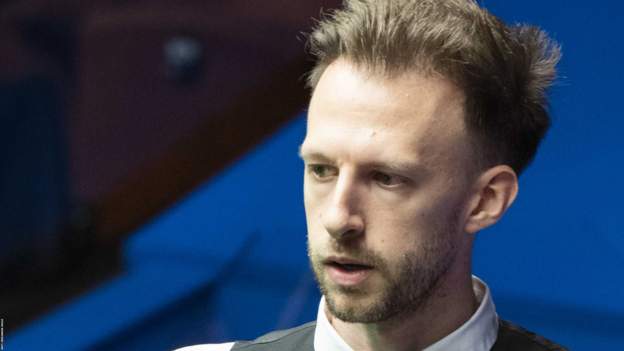 Defending champion Judd Trump is out of the World Championship after falling to a 13-9 quarter-final defeat by fellow Englishman Kyren Wilson.

But Wilson capitalised on a poor safety shot to move 12-9 ahead before clinching his victory with a 104 break.

Wilson, 28, will now play Kurt Maflin or Anthony McGill in what will be his second World Championship semi-final.

Meanwhile, Ronnie O’Sullivan grabbed the momentum in his clash with Mark Williams, which is set to play to finish on Tuesday evening.

Five-time champion O’Sullivan won four consecutive frames including a break of 112, to ensure he will resume their quarter-final encounter level at 8-8.

One of the best wins of my career – Wilson

Trump had been hoping to break the so-called ‘Crucible curse’ by becoming the only first-time winner to retain his title since the tournament moved to its current venue in 1977.

However, while he started positively, winning three of the first four frames going into the mid-session interval he was unable to maintain his best form.

Crucially many of the uncharacteristic errors that appeared in victories against Tom Ford and Yan Bingtao also resurfaced.

An attempt to get safe with a swerve shot from the baulk cushion presented Wilson with an easy opportunity to win the 21st frame at the second opportunity.

And while he had the first chance in the next frame, he went in-off the black, and a further miss on a long red let in Wilson who sealed his win with his first century break of the match.

“I wasn’t lying when I said I was really looking forward to playing Judd here,” Wilson said.

“He is the reigning world champion and world number one so if you can’t get up for a match like that in the quarter-finals you will never get up for any.

“It’s nice having it under your belt to beat the current world champion. You want to see where your game is at when you are playing those players. We’ve seen it is not in bad shape.

“He’s set the benchmark for the rest of us so this is definitely up there as one of the best wins of my career.”

Kyren my favourite to win from here – Trump

Trump’s record-breaking season has seen him claim six ranking titles but while only four of his 102 century breaks came in Sheffield, he dismissed suggestions his form had dipped.

“I know a lot of people were saying I wasn’t playing my best during this tournament but I was quite happy with how I was playing. It was just a lot of things happening at the wrong time out there and that did really change the game.

“Even in the last frame, bits of luck you need to win the tournament weren’t going my way. Kyren played some really good stuff. His long potting was amazing, he scored pretty heavily and got the run at the right times which is a dangerous combination.

“The difference between 9-7 and 10-6 is huge. Minor things can affect snooker in such big ways. If Kyren plays like that and gets a good run of the balls he will be very tough to stop.

“It looks like he has improved and he will be my favourite to win the title from here.”

The ‘Crucible curse’ has reared its ugly head. There is a lot of pressure on you coming back as world champion. From ball one, on the first morning, Judd Trump looked like he was under a bit of pressure and it weighed heavy on him.

Maybe the coronavirus pandemic affected him. He has had a few months off where he was on a great run of confidence.

He had that gap and had it been played at the scheduled time it might have been different. He seems to think he was playing okay but he wasn’t as fluent, didn’t seem as confident and didn’t score as he has done all season.