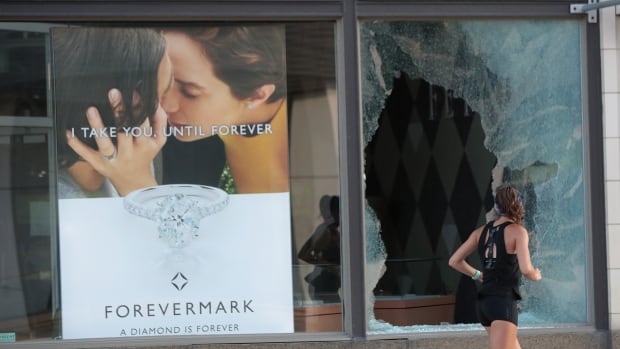 Chicago’s police commissioner says more than 100 people were arrested following a night of looting and unrest that left 13 officers injured and caused damage in the city’s upscale Magnificent Mile shopping district and other parts of the city.

Police Supt. David Brown said a heavy police presence is expected in the downtown area, and access will be restricted in the area from 8 p.m. to 6 a.m. until further notice.

Those arrested were expected to face charges including looting, disorderly conduct, battery against police.

“This was not an organized protest,” said Brown. “Rather, this was an incident of pure criminality.”

Chicago Mayor Lori Lightfoot echoed those statements: “To be clear, this had nothing to do with legitimate, protected First Amendment speech.”

Lightfoot said the city has activated a neighbourhood protection program that will be in place until officials are confident that “neighbourhoods are safe.”

She thanked the police department for what she characterized as their professional and restraint during difficult times recently.

The city saw 31 shootings over the weekend, with three people dead as a result, according to Brown.

“These shooting incidents and the looting we saw overnight are completely unacceptable,” he said.

Brown said it appeared “misinformation” was spread in the streets and on social media after an officer-involved shooting late Sunday afternoon in the Engelwood area that led to the arrest and hospitalization of a 20-year-old man. Police said the man had pointed a gun during a foot chase.

More than an hour after the shooting, police and witnesses said a crowd faced off with police after someone reportedly told people that police had shot and wounded a child. That crowd eventually dispersed.

Along the Magnificent Mile, people were seen going in and out of stores carrying shopping bags full of merchandise. On streets throughout the downtown area, empty cash drawers from stores were strewn about and ATMs were ripped open. Local media reports showed footage of a number of jewelry stores and pharmacies that had been targeted.

Stores miles from downtown were also ransacked, with parking lots littered with glass and items from inside the stores. Clothes hangers and boxes that once contained television sets and other electronics were also discarded.

There was a large police presence Monday morning outside an Apple store located north of Chicago’s downtown area. Blocks away, debris was strewn in parking lots in front of a Best Buy and a large liquor store.

Train and bus service into downtown was temporarily suspended at the request of public safety officials, the Chicago Transit Authority said on Twitter. Bridges over the Chicago River were lifted, preventing travel to and from the downtown area, and Illinois State Police blocked some expressway ramps into downtown.

Chicago and its suburbs, like many other cities, saw unrest following the police killing in Minneapolis of George Floyd. Chicago’s central business district and its commercial areas were shut down for several days after stores were damaged in the wake of marches protesting Floyd’s death.