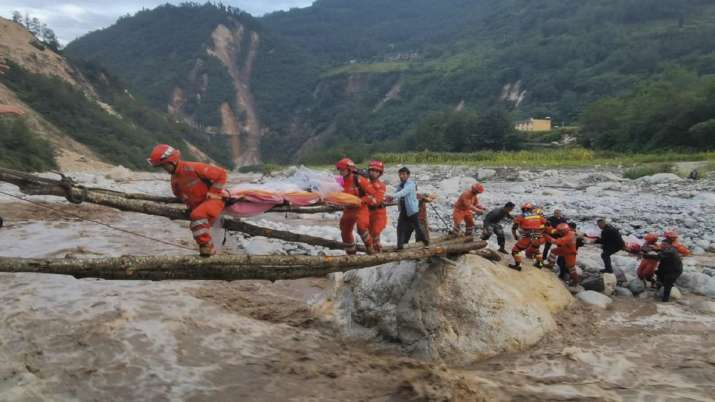 Buildings in Chengdu and other parts of western China were shaken by the quake. No damage was reported in the city. The quake struck a mountainous area in Luding county, which sits on the edge of the Tibetan Plateau roughly 200 kilometres (125 miles) from Chengdu, where tectonic plates grind up against each other. Despite only recording a handful of cases, Chengdu’s lockdown is the most severe since China’s largest city of Shanghai was placed in isolation over the summer, prompting rare protests in person and online.

China’s authoritarian Communist political system demands strict adherence to measures dictated by the central leadership overwhelmingly dominated by party leader Xi Jinping. Local leaders, including Sichuan’s recently appointed provincial party secretary, are often parachuted in from Beijing with little knowledge of local conditions and a firm mandate to carry out Xi’s dictates. The ruthless and often chaotic enforcement of the Shanghai lockdown led to widespread complaints over shortages of food, medication and access to health care. As a sign of how little has changed, at least one district in

Chengdu has banned even the ordering of takeout meals and coffee, according to a notice posted on the internet. China has stuck to its hard-line “zero-COVID” policy of compulsory testing, lockdowns, quarantines and masking despite advice from the World Health Organization and moves by most other countries to open up again since the virus was first detected in the central Chinese city of Wuhan in late 2019. China on Tuesday reported 1,499 new cases of local infection, most of them asymptomatic. Sichuan accounted for 138 of that total figure.

The quake knocked out power and damaged buildings in the historic mountain town of Moxi in the Tibetan autonomous prefecture of Garze, where 37 people were killed. Tents were erected for more than 50,000 people being moved from homes made unsafe by the quake, the official Xinhua News Agency reported. State broadcaster CCTV showed rescue crews pulling a woman who appeared uninjured from a collapsed home in Moxi, where many of the buildings are constructed from wood and brick. Around 150 people were reported with varying degrees of injuries.

Another 28 people were killed in neighbouring Shimian county on the outskirts of the city of Ya’an. State media reported 248 people injured, mainly in Moxi, and another 16 people missing. Three of the dead were workers at the Hailuogou Scenic Area, a glacier and forest nature reserve. Along with the deaths, authorities reported landslides that damaged homes, caused power interruptions and stranded people behind a newly created lake. One landslide blocked a rural highway, leaving it strewn with boulders.

The earthquake and lockdown follow a heat wave and drought that led to water shortages and power cuts due to Sichuan’s reliance on hydropower.

China’s deadliest earthquake in recent years was a 7.9 magnitude quake in 2008 that killed nearly 90,000 people in Sichuan. The temblor devastated towns, schools and rural communities outside Chengdu, leading to a years-long effort to rebuild with more resistant materials.