Home Middle East China’s leader scolded Trudeau in public. It reveals a lot about what... 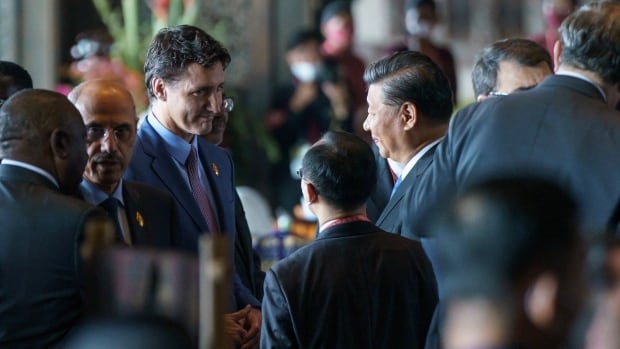 Xi Jinping’s threatening rebuke of Justin Trudeau was a rare and surprising move by the Chinese president, and highlighted the disregard he has for the Canadian prime minister, according to some experts and former diplomats.

“He certainly wouldn’t speak like that to the U.S. president. So it does suggest that Mr. Xi has a degree of disdain for the prime minister and does not see Canada as an important partner,” said Charles Burton, senior fellow with the Macdonald-Laurier Institute and a former diplomat to China.

Burton said he found the language used by Xi during his interaction with Trudeau at the G20 summit in Bali, Indonesia, to be “quite dismissive and threatening,” indicating that any illusions the government has that China respects Canada as an influential nation in the world have long since disappeared.

“I just think in general, it was very unpleasant. I found it highly offensive on the part of his intent,” Burton said.

“We have not seen the president of China engaging in this really quite undiplomatic, rough language with a counterpart leader of another country”

Trudeau and Xi spoke face to face briefly on the sidelines of the G20 summit in Bali on Tuesday. After the unofficial meeting, the Prime Minister’s Office issued a readout of the conversation noting the topics that were discussed and who raised them.

Xi Jinping accuses Trudeau of leaking discussion to the media

Chinese President Xi Jinping reprimanded Prime Minister Justin Trudeau for leaking the details of a discussion between the leaders to the press.

But the two later crossed paths again in a public space in Bali, in full view of the media, which captured their exchange.

Through an interpreter, Xi accused Trudeau of inappropriately leaking the content of their discussion, and also claimed that what was reported in the media was not an accurate reflection of their conversation.

Trudeau interrupted the Chinese leader, saying Canada believes in “free and open and frank dialogue,” and that while they have disagreements, they should work together.

However, Xi’s translator didn’t translate everything the president said.

According to a translation by The Canadian Press, Xi also told Trudeau that “we should have conversations in a respectful way, otherwise, the result can’t be predicted.”

After the exchange, the pair shook hands and parted ways.

During his closing media conference, Trudeau responded to the incident, saying that his government trusts its citizens want to be apprised of the work that he is doing on their behalf.

“I won’t shy away from being open with Canadians, even as we discuss important and sometimes delicate subjects,” the prime minister said.

Lynette Ong, a professor of political science at the University of Toronto’s Munk School of Global Affairs and Public Policy, said that Xi is someone who usually minces his words and is very careful about what he says in public.

She said Xi knew his rebuke would be captured by the media, which means he wanted this “dressing down” to be seen by domestic and international audiences.

“It’s very rare that Xi Jinping would engage in this type of behaviour,” said former Canadian ambassador to China Guy Saint-Jacques of Xi confronting Trudeau. “He is very agitated, his face is red, his arms are moving…and he knows that cameras are rolling.”

Threat may have economic, diplomatic implications

Guy Saint-Jacques, who was Canada’s ambassador to China from 2012 to 2016, said that this was all “preordained,” and that Xi wanted to pass along a clear message to Trudeau as the cameras were rolling.

“I would agree that this was a veiled threat, and I find this whole episode very surprising because it’s very rare that Xi Jinping would engage in this type of behaviour,” Saint-Jacques told CBC’s Power & Politics host David Cochrane.

Xi’s purpose was to make Trudeau lose face publicly at home and around the world, Saint-Jacques said, noting the confrontation shows the disregard the Chinese president has for the prime minister.

“We have to pay attention to this veiled threat, because what does he have in mind?”

Eurasia Group President Ian Bremmer told Power & Politics that he believes Xi’s threat to Trudeau wasn’t veiled, but “fairly direct” and that there could be economic or diplomatic implications.

Xi made a ‘fairly direct threat’ to Trudeau: Ian Bremmer

“It wasn’t a veiled threat. I think it was a fairly direct threat,” said Eurasia Group President Ian Bremmer of comments Chinese President Xi Jinping made to Prime Minister Justin Trudeau. “It was as if he was delivering a message and dispensing with Trudeau.”

“We’ve seen before that the Chinese are willing to make an example of individual leaders and countries when they feel disrespected.“

Bremmer said it was as if Xi was delivering a message and dispensing with Trudeau.

“He showed utter indifference to that sentence that Trudeau gave to try to justify his perspective in the relationship. That is not the way you want a relationship between the Canadians and the Chinese to go,” Bremmer said.

“So obviously, there’s going to be some serious thinking about how to handle this going forward by the Canadians and frankly, with the Americans, too.”

Canada is expected to soon release its Indo-Pacific strategy that will contain measures certain to anger Beijing.

Saint-Jacques said his advice to Foreign Affairs Minister Mélanie Joly is that she should speak to her Chinese counterpart at the next Asia-Pacific Economic Cooperation (APEC) summit and attempt some damage control.

Foreign Affairs Minister Mélanie Joly hints at Canada’s new strategy for Indo-Pacific relations, including addressing the tensions between China, Canada and the rest of the world. Plus, what to make of Ontario Premier Doug Ford’s reversal on using the notwithstanding clause to prevent education workers from striking.

“To say, ‘Look, we have to lower the temperature. I know you don’t like our Indo-Pacific strategy, but we have subjects to discuss with you. We can help you in some areas that will benefit both sides. And let’s try to move this ahead,’ ” he said.

“But I think that in the case of the prime minister and President Xi, it will be difficult to make progress.”