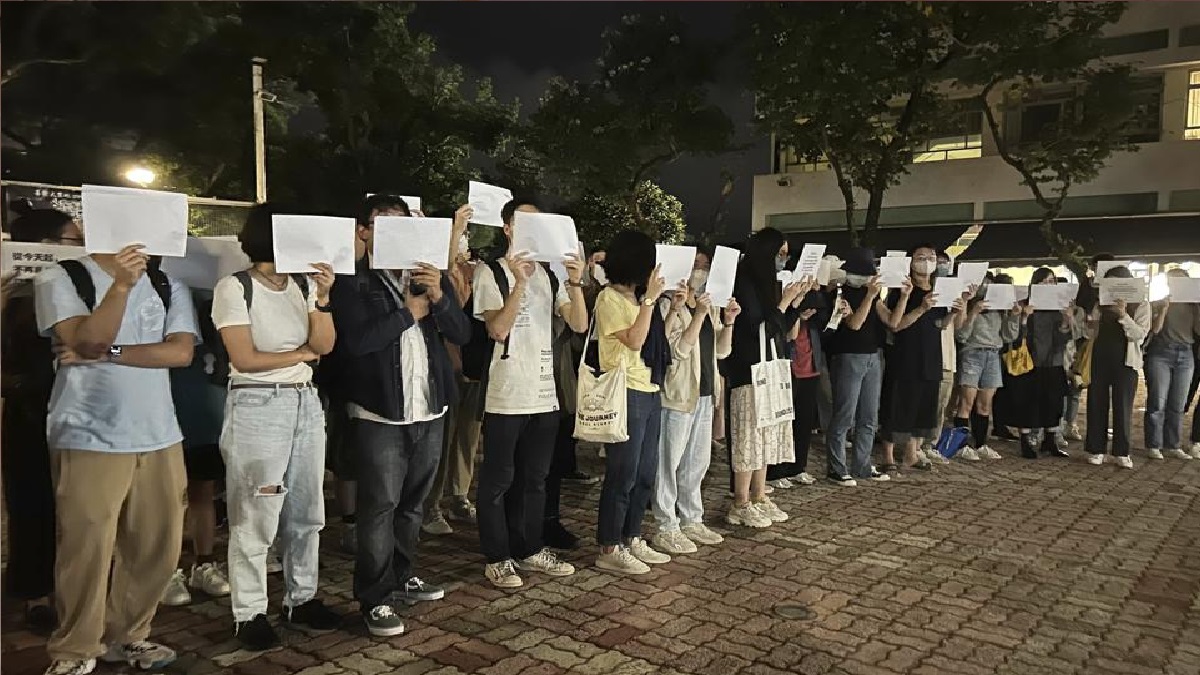 Protest against ‘zero Covid policies’ spread to Hong Kong as Chinese security forces is oppressing agitation over the new curbs in the mainland. Students in Hong Kong chanted “oppose dictatorship” in a protest against China’s Covid rules Monday.

Protesters are on the roads pressing unprecedented call for President Xi Jinping to resign in the biggest show of opposition to the ruling Communist Party in decades.

Rallies against China’s unusually strict anti-virus measures spread to several cities over the weekend, and authorities eased some regulations, apparently as part of an attempt to quell that public anger. But the government showed no sign of backing down on its larger Covid strategy, and analysts expect authorities to quickly silence the dissent.

About 50 students sang at the Chinese University of Hong Kong and some lit candles in a show of support for those in mainland cities who demonstrated against restrictions that have confined millions of people to their homes. Hiding their faces to avoid official retaliation, the students chanted, “No PCR tests but freedom,” and “oppose dictatorship, don’t be slaves.”

The gathering and a similar one elsewhere in Hong Kong were the biggest protests there in more than a year under rules imposed to crush a pro-democracy movement in the territory, which is Chinese but has a separate legal system from the mainland.

The White House said on Monday that China’s zero-Covid policy is unlikely to work and reaffirmed that everyone around the world has the right to protest peacefully, amidst unprecedented demonstrations in the Communist nation over its stringent policy.

“We’ve said that zero-Covid is not a policy we are pursuing here in the United States. And as we’ve said, we think it’s going to be very difficult for the People’s Republic of China to be able to contain this virus through their zero-Covid strategy,” a spokesperson of the White House National Security Council told PTI.

The spokesperson’s comment comes amidst protests from various parts of China against the strict enforcement of its zero-Covid policy, under which authorities block apartment buildings or even cordon off a neighbourhood once a resident tests positive, causing great inconvenience to the people.

“For us, we are focused on what works and that means using the public health tools like: continuing to enhance vaccination rates and making testing and treatment easily accessible,” the spokesperson said.

“I’ve wanted to speak up for a long time, but I did not get the chance to,” said James Cai, a 29-year-old from Shanghai who attended a Hong Kong protest and held up a piece of white paper, a symbol of defiance against the ruling party’s pervasive censorship. “If people in the mainland can’t tolerate it anymore, then I cannot as well.” It wasn’t clear how many people have been detained since the protests in China began Friday, sparked by anger over the deaths of 10 people in a fire.

Some have questioned whether firefighters or victims trying to escape were blocked by locked doors or other anti-virus controls.

Without mentioning the protests, the criticism of Xi or the fire, some local authorities eased restrictions on Monday.

In Hong Kong, protesters at Chinese University put up posters that said, “Do Not Fear. Do Not Forget. Do Not Forgive,” and sang including “Do You Hear the People Sing?” from the musical Les Miserables. Most hid their faces behind blank white sheets of paper.

“I want to show my support,” said a 24-year-old mainland student who would identify herself only as G for fear of retaliation. “I care about things that I couldn’t get to know in the past.” University security guards videotaped the event but there was no sign of police.

At an event in Central, a business district, about four dozen protesters held up blank sheets of paper and flowers in what they said was mourning for people killed in the fire in Urumqi in China’s northwest and others who have died as a result of “zero Covid” policies.

Police cordoned off an area around protesters who stood in small, separate groups to avoid violating pandemic rules that bar gatherings of more than 12 people. Police took identity details of participants but there were no arrests.

Hong Kong has tightened security controls and rolled back Western-style civil liberties since China launched a campaign in 2019 to crush a pro-democracy movement. The territory has its own anti-virus strategy that is separate from the mainland.