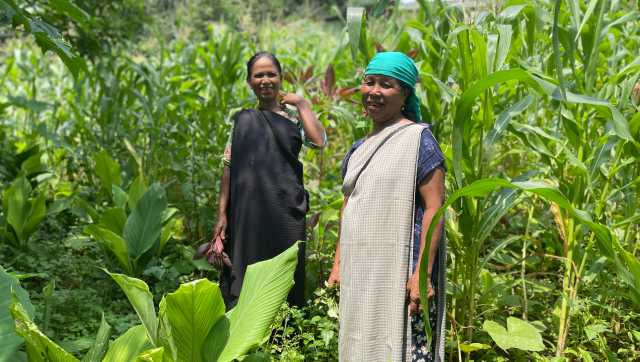 Forest edibles including herbs, vegetables, tubers, etc. and have been important part of the Meghalayan diet

As floods and incessant rain wreak havoc across the country, some reports indicated India lost Rs 60,000 crore due to rainfall and climate change. So I journeyed into Meghalaya to understand how does climate chaos affect India’s wettest state? Previously, climate change had dethroned Cherrapunji as the wettest place on the Earth and made Mawsynram, 10 kilometres away, the wettest place. But what did the climate chaos mean for the farmers, agriculture and food security? I was soon to find out.

So the paddy shoots were about 10 inches high when I arrived in Khweng. It is a quaint village about an hour north from Shillong. Rains had been heavy, and most of the farmers were busy working on paddy fields. Now Khweng, is a highly agro-biodiverse village with over 319 food plants and mixture of plains and hill agriculture. Main crops range from paddy, ginger, corn to tapioca.

Here I met Rusillian Khymdeit and Margina Syiem, two women farmers. They first took us for a stroll into their farms familiarising me with medicinal and edible herbs and local vegetables. Post our biodiversity tour, the hill farms awaited us. Earlier the hills farms were community owned and one plot was passed around the community. But now I saw barbed wires and fencing, the community area is also individually owned.

We sat among ginger plants and began to talk. “Heavy rains has damaged cow pea plants. This year the rainfall has been heavy and untimely. Earlier there used to be 5-6 months of rain, but now all that is changing fast, we don’t know when it will rain and how much,” Margina said.

“Even in terms of agriculture, this hill land used to grow hill paddy varieties, but the old crops are dying and being replaced by monocultures — commercial broomstick or ginger farming. People grow lesser millets now,” Rusillian told us. It was during our conversation the forest edibles came up.

Now forest edibles including herbs, vegetables, tubers, etc. and have been important part of the Meghalayan diet. “The Khasi people have always been self-sufficient when it comes to food. This is because of the abundance in forest foods. In the summer months most people depend on forest edibles. But due to climate chaos all that is changing,” Margina said.

“Since our childhood, we have lost 20-30 per cent of forest edibles in our area. The reason is untimely and heavy rains, wash away the wild seeds and disturb the fruiting and seeding cycles of the wild crops. Of course deforestation and increasing population is also putting pressures on forest edibles too,” Rusillian added.

After getting a stock of things in Khweng, I journeyed into Lakadong turmeric land and reached Mulum, Jantia hills. Dressed in their traditional Khasi dress men and women farmers awaited us. After the customary ‘red tea’, we stepped into their seed bank and our conversations began.

“Most people in the area also practice Jhoom agriculture, and we rely on our own native seeds and agricultural ways. The seeds we get from government failed in the area because of changing climate and it didn’t suit our taste. We grow native red rice. And save our seeds in gunny bags, bamboo, etc.,” Konkitbak Suchiyan said.

Although Jaintia Hills is quite different from Shillong, it was also the victim of climate change. Frank Suchiyan, an elderly farmer explained, “The heat in these areas is much more and the rainfall has become highly inconsistent and unpredictable. Both these factors have led to increase in pest and diseases. Our rice which was almost disease-free, now is attracting newer pests and we are suffering crop losses.”

“Even our forest foods are running dry, perhaps that is why monkeys are coming to attack our harvests now. Although there is a ban on pesticides and weedicides, people through the black market are buying and spraying. This directly impacts forest edibles and agriculture. Our seeds burn with chemicals, and we lose crops. We only have 40% of forest edibles remaining now,” Frank said. Another indicator of climate related stress on forest fungi, HH Mohrmen, a pastor and agricultural scholar with four books under his name, explained, “The first effects of climate change in this area, can be seen on wild mushrooms. Meghalaya, apart from being the contender biodiversity for rice also hosts a diversity of wild edible and medicinal mushrooms. They will be part of our culture for a long time. But since the changing rainfall and heat, the mushroom growth has taken a massive hit. We are losing the wild mushroom varieties and even their yields are going down.” As an amateur mycophile, I was disheartened and return to Shillong for the night.

The next day began with a 3-hour long drive through the misty mountains. I was two hours ahead of Smit when I reached Umasawar. It was raining when I arrived. The local women folk had gathered at the village community hall and were discussing their issues with local development organisation. I soon found out, this was primarily a village of farmers who grew rice, potatoes, millets, beans, vegetables, cucumber, yams, etc. The 90 households of Umasawwar farmed, raised livestock and worked in the quarries, when they could. This was life for them.

Although the rain was heavy, wrapped in two raincoats, I ventured to see their village and forest. After two hours of walking, I was content. I had smelled their wild flowers, tasted their pork and drank from their fresh streams. It was now time to talk.

Walking back to the community hall, I found Sitamary, an elderly farmer. She narrated the story of her village, where almost nothing happened. Life had been the same for many generations. But the threat of climate change is stirring things up. “Since I was a child, it rained quite regularly. My mother and grandmother knew when to plant and when to go to the forest for edibles. Our community was working together with nature. But now our agriculture is in trouble. The new seeds have brought new diseases with them. The rainfall is also unpredictable, resulting in heavy losses. Most farmers have left to either do mining or survive on very little,” Sitamary said.

I pressed further and wanted to know about the forests and climate change. “The wisdom of our grandmothers doesn’t serve us now. This new weather is upsetting everything. As a result people are engaging in illegal mining. The mine slurry then pollutes our waters killing fishes and making the water unsuitable for drinking. Our forest size has also reduced,” Sitamary said.

After spending another hour with the villagers, I started my drive back to Shillong. The next few days, I spent around Shillong exploring villages around it, trying to figure out the agricultural supply chains. It was shocking to hear that Meghalaya imported most of its fish to vegetables from other states as far as Andhra Pradesh.

But for the final measure of things, I journeyed southward and reached Nongtraw, a primarily jhoom village. This community had mastered the art of living sustainably with nature. Here I met local resident and agricultural expert Pius Rani. Being a man in matrilineal world, he didn’t have any land title but nevertheless knew a lot of agriculture and effects of climate change on their community.

“Climate change comes to our communities in terms of excessive and unpredictable rainfall. Over the centuries our ancestors have worked with nature to make this entire mountain into a food forest, but climate chaos threatens all this. We have already seen lesser yields of forest edibles and our crops too. When I was a child, we harvested more food, but now things are rapidly changing. Our pollinators and biodiversity both have drastically reduced,” Pius said.

We spent the day roaming about talking to other farmers too. It was nearly dusk now and I had a long way to go. Before leaving, I asked Pius about future of agriculture in Meghalaya? Especially as Meghalaya is battling with some many climate issues. He looked at me and smiled, “There is always hope, till the time we stick to old ways of working with nature. These may be tough times, but nature teaches us to be adaptive. If we remain true and not go for environment degrading chemicals, there is a strong chance that our farmers will lead when it comes to fighting climate change.”

This is part 3 of a three-part series. Click here for Part 1 and Part 2.

The writer is an independent agri-policy analyst and the former director, Policy and Outreach, National Seed Association of India. He tweets @Indrassingh.