Home Middle East Coronavirus: What’s happening in Canada and around the world on Friday |... 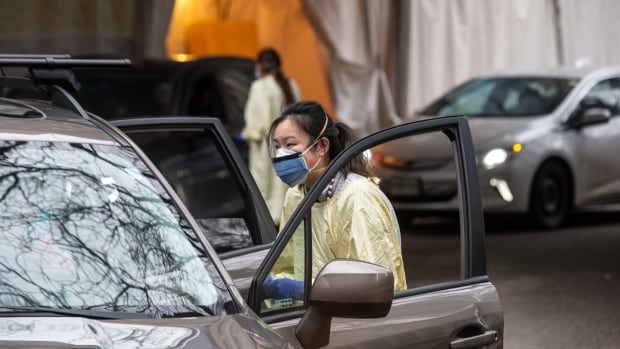 With COVID-19’s latest wave showing few signs of abating, concerns are deepening as more and more workers in vital sectors are sidelined by the pandemic.

In Ontario, where the number of COVID patients in hospital has ballooned by a factor of five in just two weeks to 2,279, numerous hospitals are reporting massive staff absences due to COVID-19 diagnoses.

And though the 300 COVID-19 patients in intensive care units pales in comparison to the peak during the third wave of the pandemic, when 900 people with the virus were in ICU, that doesn’t mean health-care workers are breathing any easier, said Anthony Dale, president of the Ontario Hospital Association.

“We still have very, very sick people. We still have a very large number of people being admitted to intensive care,” Dale said. “I don’t know where the ceiling will be.”

In Quebec the government says about 20,000 health-care workers are off the job after testing positive or being exposed to the virus. And four federal prisons in the province say they are now “very close” to experiencing staff shortages for the same reason.

Hospitals in New Brunswick say they, too, are struggling with staffing issues due to coronavirus infections.

The health-care sector is not alone in its struggles, as organizations across the country struggle to meet staffing needs as people get sick or isolate due to exposure. Businesses in every sector are dealing with similar issues, as are governments.

Police forces in Edmonton, Calgary and Winnipeg, for example, are facing similar staffing problems, as is Winnipeg Transit, GO Transit in Ontario and the fire department in Prince Rupert in northwestern British Columbia.

-From The Canadian Press, last updated at 8 a.m. ET

How to treat COVID-19 at home

A doctor and pharmacist say many treatments for common colds and flu will also be helpful for double-vaccinated adults who are recovering from COVID-19 at home. 2:06

With lab-based testing capacity deeply strained and increasingly restricted, experts say true case counts are likely far higher than reported. Hospitalization data at the regional level is also evolving, with several provinces saying they will report figures that separate the number of people in hospital because of COVID-19 from those in hospital for another medical issue who also test positive for COVID-19.

For more information on what is happening in your community — including details on outbreaks, testing capacity and local restrictions — click through to the regional coverage below.

You can also read more from the Public Health Agency of Canada, which provides a detailed look at every region  —  including seven-day average test positivity rates — in its daily epidemiological updates.

In the North, Nunavut Premier P.J. Akeeagok warned on Thursday that workers in critical sectors in the territory are “close to the breaking point” as the province deals with Omicron, staffing shortages and health system strain.

“Staff are exhausted, balancing work as well as child care, which is unsustainable for many,” he said, as he pleaded with daycare operators

In Atlantic Canada, Newfoundland and Labrador health officials on Thursday reported four hospitalizations and no additional deaths. The province, which recorded 503 lab-confirmed cases, is dealing with significant health system strain as large numbers of health workers are out of work sick or isolating.

Health officials in Nova Scotia — which on Thursday reported 48 hospitalizations, no additional deaths and 745 lab-confirmed cases — moved to restrict visitors at some hospitals as they dealt with COVID-19 outbreaks.

New Brunswick, meanwhile, saw one additional death and 63 hospitalizations on Thursday, as provincial health officials urged people in the province to get their booster dose as soon as they are eligible. The province, which has not yet lowered the eligibility age to those under the age of 50 in the general population, on Thursday said there were 672 additional lab-confirmed cases.

In the Prairie provinces, hospitalizations in Manitoba rose to 263, health officials reported on Thursday, as they announced six additional deaths. The province, which recorded 2,548 additional lab-confirmed cases, is seeing staffing struggles in several key sectors, including home care and local government.

In Saskatchewan, the province’s top doctor on Thursday urged people not to gather as the province reported one additional death and 100 hospitalizations. The province, which recorded 913 new lab-confirmed cases, is making contingency plans for increased strain on health-care systems, the health authority said.

In British Columbia, health officials on Thursday reported three additional deaths and 324 hospitalizations. The province, which recorded 3,223 additional lab-confirmed cases, is preparing for staffing shortages in schools as students prepare to return to in-person learning.

-From CBC News and The Canadian Press, last updated at 8 a.m. ET

As of early Friday morning, roughly 300.3 million cases of COVID-19 had been reported worldwide, according to Johns Hopkins University’s coronavirus tracking tool. The reported global death toll stood at more than 5.4 million.

In Europe, British troops are deploying to hospitals in London that are struggling to cope with “exceptional” staff shortages amid the surge in COVID-19 cases fuelled by the Omicron variant. The Ministry of Defence said Friday that it is sending some 40 military medics and 160 general duty staff to plug staffing gaps caused by National Health Service personnel who are either ill or self-isolating amid the spike in coronavirus cases in the capital.

In the Americas, Argentina and Brazil continued to report record spikes in daily cases, while Mexico braced for a grim death milestone, even as several nations raced to vaccinate residents amid doubts over lasting effects of booster doses.

In the Asia-Pacific region, Thailand has announced it is tightening some entry restrictions while expanding its “sandbox” quarantine program, and has urged people to follow social distancing and mask rules to control the spread of COVID-19 fuelled by the omicron variant. The government did not announce any lockdown, but issued restrictions on alcohol consumption in restaurants. It also called on people to avoid public gatherings, public transportation and travel around the country. Most schools will stay open, while bars and nightclubs will remain closed.

In Africa, health officials in South Africa on Thursday reported 9,860 additional cases and 551 additional deaths, though health officials noted the significant jump in reported deaths was “due to the ongoing audit exercise conducted by provinces across the country to address a backlog of COVID-19 mortality and new cases.”

In the Middle East, the United Arab Emirates on Thursday reported 2,687 additional cases of COVID-19, with no additional reported deaths.

-From The Associated Press, Reuters and CBC News, last updated at 7:50 a.m. ET