Home Middle East Coronavirus: What’s happening in Canada and around the world on Tuesday |... 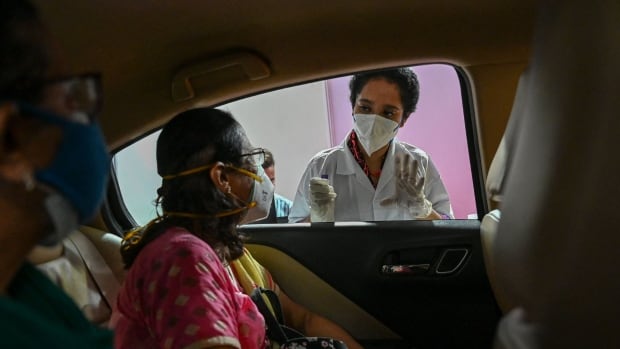 COVID-19 infections and deaths are mounting with alarming speed in India with no end in sight to the crisis, and a top public health expert is warning of hard weeks ahead.

India’s official count of coronavirus cases surpassed 20 million on Tuesday, nearly doubling in the past three months, while deaths officially have passed 220,000. Staggering as those numbers are, the true figures are believed to be far higher, the undercount an apparent reflection of the troubles in the health-care system.

Infections have been increasing in India since February in a disastrous turn blamed on more contagious variants of the virus as well as government decisions to allow massive crowds to gather for Hindu religious festivals and political rallies before state elections.

The challenges are steep in states where elections were held and unmasked crowds likely worsened the spread of the virus. The average number of daily infections in West Bengal state has increased by a multiple of 32 to over 17,000 since the balloting began.

Goon also said that the state needs to hasten immunizations. But the world’s largest maker of vaccines is short of shots — the result of lagging manufacturing and raw material shortages.

Dr. Ashish Jha, dean of Brown University’s School of Public Health in the United States, said he is concerned that Indian policymakers he has been in contact with believe things will improve in the next few days.

“I’ve been … trying to say to them, ‘If everything goes very well, things will be horrible for the next several weeks. And it may be much longer,'” he said.

“That is what’s going to break the back of this surge,” he said.

-From The Associated Press and Reuters, last updated at 7 a.m. ET

WATCH | CEO of Nova Scotia Health talks about the situation in the province’s hospitals:

Dr. Brendan Carr, CEO of Nova Scotia Health, says roughly 44 ICU beds are still available for patients with the virus. But, hundreds of surgeries have been delayed to make this happen. 4:19

Ontario on Tuesday reported 2,791 new cases of COVID-19 and 25 additional deaths. COVID-19 hospitalizations stood at 2,167, with 886 patients in intensive care, the province reported.

In Atlantic Canada, Nova Scotia reported 146 new cases of COVID-19 on Monday, as Premier Iain Rankin criticized the “selfish few” who were breaking the rules as the province works to clamp down on transmission.

New Brunswick on Monday reported 15 new cases of COVID-19 and one additional death, while Newfoundland and Labrador reported four new cases — as well as one more aboard a cargo ship. There were no new cases reported on Prince Edward Island.

Alberta on Monday reported 2,012 new cases of COVID-19 and four additional deaths. Dr. Deena Hinshaw, the province’s chief medical officer of health, said there were 23,608 active cases in Alberta. There were 658 people in hospital because of the illness, including 154 in intensive care.

Some doctors are concerned about new guidance for the Johnson & Johnson COVID-19 vaccine after the National Advisory Committee on Immunization said it should be limited to those over 30 who don’t want to wait for an mRNA vaccine. Meanwhile, Health Canada continues to advise Canadians to take the first vaccine available to them. 2:12

Across the North, health officials in Nunavut reported eight new cases, while seven new cases were reported in the Northwest Territories. There was one new case reported in Yukon.

As of early Tuesday morning, more than 153.5 million cases of COVID-19 had been recorded around the world, according to a case-tracking tool maintained by Johns Hopkins University. The reported global death toll stood at more than 3.2 million.

In the Middle East, Kuwait’s government is barring unvaccinated residents from travelling abroad starting later this month, the latest attempt to tame the spiraling coronavirus outbreak in the Gulf Arab sheikhdom.

In the Asia-Pacific region, Taiwan became the latest place to ban arrivals from India, as it moves to prevent new infections, with more nations reporting cases of a variant first identified in the subcontinent.

In Europe, the president of the European Union’s executive arm says a quarter of all EU residents have now received a first dose of coronavirus vaccine. After a slow start to its vaccination campaign, the EU has sped up the pace of immunization as vaccine supplies in the 27-nation region increased in recent weeks.

“Vaccination is gaining speed across the EU: we have just passed 150 million vaccinations,” Ursula von der Leyen said in a message posted on Twitter.

In the Americas, Mexico hopes to finish vaccinating its entire population against COVID-19 by the end of next year’s first quarter, Mexico’s deputy health minister, Hugo Lopez-Gatell, said.

Trinidad and Tobago said on Monday it was tightening lockdown restrictions for three weeks starting at midnight as the number of new COVID-19 cases hit new highs and the Caribbean twin-island nation faces a potential shortage of hospital beds.

-From Reuters and The Associated Press, last updated at 10:30 a.m. ET