Home Middle East Damar Hamlin deserves our support. But so do players who suffer off... 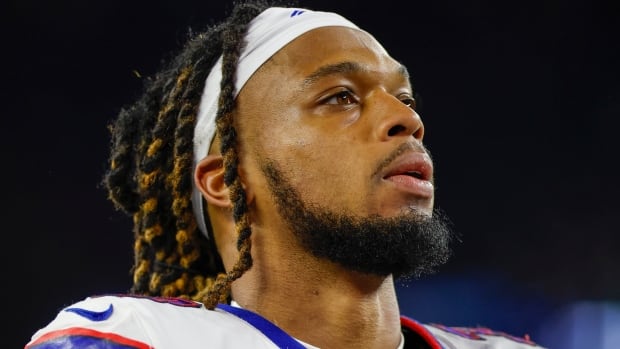 As It Happens6:34Damar Hamlin deserves our support. But so do players who suffer off camera, says expert

Neuroscientist Chris Nowinski was heartened to see the football community rally around Buffalo Bills player Damar Hamlin when he suffered cardiac arrest during a game.

But he was also reminded of all the players who suffer — or even die — off-camera from heart conditions and brain injuries directly related to the sport.

Hamlin, who was resuscitated on the field during a game in Cincinnati last week, was discharged Monday from the University of Cincinnati Medical Center and flown to Buffalo, where he will continue his recovery.

Nowinski is the founding CEO of the nonprofit Concussion Legacy Foundation. He’s also a former professional wrestler and college football player. Here is part of his conversation with As It Happens host Nil Köksal.

You’re a longtime advocate for safety in sport. And certainly what happened to Damar Hamlin brought a lot of longstanding concerns and issues to the fore. It really got the world’s attention. But what did you think about that reaction?

Football is a life-or-death sport. And very rarely do fans actually get to see that play out in real time. So I think all of us watching felt a feeling that we don’t normally feel of watching someone’s life hanging in the balance.

I think it’ll be memorable for everybody. But it also was a stark reminder that the people that are entertaining us are actually risking their lives in more ways than one.

Less than a week after Buffalo Bills player Damar Hamlin suffered a cardiac arrest during a game, fans and players showed their support for him and his recovery at NFL stadiums across the U.S.

In your piece for the New York Times, you wrote that you’re concerned that people are missing a lot of the other issues that happen not just on the field, but off the field once players retire. Can you tell me a bit about that?

Cardiologists think he suffered from commotio cordis. But that happens to 15 or 20 athletes a year…. It rarely happens in American football.

Earlier in the day, I had learned about a former NFL offensive lineman that I was in touch with, Uche Nwaneri, who had died at the age of 38 of a [suspected] heart attack.

It just reminded me of how frequently former offensive linemen are dying of heart disease. And so I looked back and compiled. It’s one or two a year, every year, dying in their 20s, 30s and 40s — which is very rare. And the data shows they have a greater risk.

So [if] we want to talk about cardiac issues in the NFL, we should actually be worried about [the fact that] more people are dying from long-term effects than they are dying from acute effects. But they’re dying away from the cameras. They’re not dying on the field. And so people don’t connect those dots.

But as a former lineman myself who played senior year at nearly 300 pounds, you realize that being a lineman is not a good idea. And parents should know that bulking up your kid will change their health trajectory going forward. Not everyone’s able to lose the weight, and there’s all sorts of problems that come with it that could lead to cardiac arrest, diabetes, all these other disorders.

So that’s just one issue. I’m a neuroscientist. So then the other issue that we talk about is concussions and CTE [chronic traumatic encephalopathy].

Do you think that that’s being overshadowed by what happened to Mr. Hamlin as well?

Demaryius Thomas, a very well-respected player, just died [in 2021] at the age of 33 from an epileptic seizure caused by a brain injury. But it happened off the field, and we’ve never had that sort of response. We’ve never had the NFL community come together on that issue.

The biggest risk facing these NFL players is long-term brain disease. We know that a minimum of 10 per cent of them that are playing right now have it. It’s probably multiple times that.

Yet, you don’t talk about it. You’ll never find it discussed on an NFL broadcast.

NFL players can take risks with their lives for millions of dollars. We don’t have to necessarily feel bad about that. They’ve chosen to do a dangerous job and they’re compensated well for it.

But what shocks me is that we forget that 95 per cent of the people playing football are actually children who are not making a living and don’t even understand that they’re in a life-and-death game. And that’s where we need to focus our attention. That’s something we can change.

It’s such a big part of American life. And I know parents are listening closely in Canada and in the United States. Their ears are perking up. What should they be asking and demanding?

I’d give four pieces of advice.

One is never, never play tackle football before high school.

No. 2 is be careful about being a lineman and putting on weight. If you want to be a lineman, you still don’t necessarily have to put on the weight. Coaches are telling you to do it. Don’t necessarily do it.

I would encourage every program to not have kick-offs. And … if the league does kick-offs — which is almost everybody — don’t let your kid play in them. It’s 20 times more dangerous than other plays.

And then make sure your team has an athletic trainer. Not every school does. That’s your medical advocate who keeps an eye out and can offer a balance to sort of an unregulated workspace.

What changes does the NFL need to make, and do you think they’ll actually make them, given how much attention has been on the Hamlin story?

Where the NFL, I think is still very wrong, is that they are underwriting youth football to recruit your children to become future fans. Their business model knows that the more young kids [who are] playing, the more they’re going to become paying customers in the future. And they’re risking those kids by making youth tackle [football] available to them when they shouldn’t.

The NFL doesn’t need those kids to be getting hit in the head hundreds of times to make them fans.

You wrote about the fact that there might be, you know, 30 physicians on the field in case something happens. But once the players leave the field, there isn’t that continuation, that continuity of care all the time.

The Concussion Legacy Foundation, which I lead, has a helpline for the public. If you’ve had concussion problems, if you’re worried about CTE, we’ll connect you with the doctors in your area.

We still have NFL players every week reaching out to that because they can’t get that support from the league, from their former teams, from the programs they’ve put together. They come to us as a charity to get advice and help on dealing with their long-term health.

So that just gives you a window into how desperate it is after a career in the NFL and 10,000 hits your head that you’re looking for help anywhere you can get it.