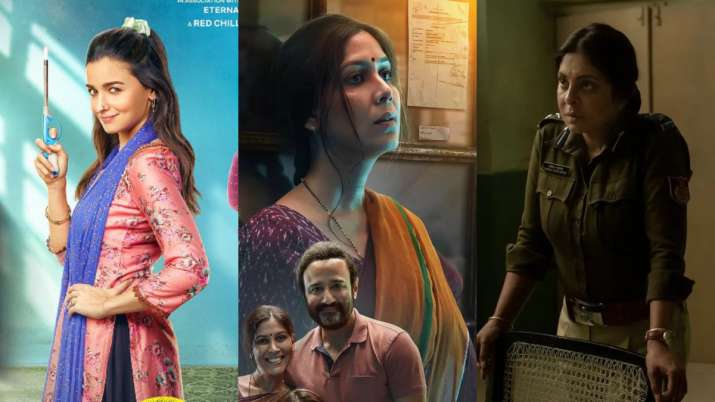 Women are portrayed in pivotal roles on screen that break stereotypes and showcase progress. From fighting crime to standing up for her rights – women are going places and how! Netflix titles such as Delhi Crime, Mai, Darlings, The Fame Game and Aranyak feature strong female protagonists who anchor the plot and stand up for themselves.

Directed by debutante filmmaker Jasmeet K. Reen, this dark comedy features Alia Bhatt, Shefali Shah, Vijay Varma, and Roshan Mathew in key roles. Alia Bhatt plays the role of a femme fatale who takes revenge on her abusive husband. The story also involves a mother-daughter duo who are trying to work their way through Mumbai, battling difficult circumstances while finding love and courage. ‘Darlings’ will be releasing on Netflix on August 5th.

Winner of the Best Drama Series at the 48th International Emmy Awards, Delhi Crime is a recreation of events that happened before and after the horrific 2012 Delhi gang rape case. In this critically acclaimed show, Shefali Shah portrays the role of police officer Vartika Chaturvedi, a character based on former Delhi Police DCP Chaya Sharma, who heads the investigation and solves the case. The seven-episode series tells the story from the point of view of the DCP who has her own challenges in finding the culprit and is often torn between her job and personal life. The critically acclaimed Netflix series Delhi Crime will return this month with its second season.

A mother’s character is always depicted as nurturing, caring, and all-forgiving. But in the series, Mai, the audience can see various facets and dimensions of motherhood. Sakshi Tanwar has played a challenging yet strong character of a mother, who transforms into a shrewd woman to avenge her daughter’s death. This on-screen character of the mother in the Netflix series leaves a deep impact on the audience.

Not only does this show mark Bollywood superstar Madhuri Dixit Nene’s OTT debut, but The Fame Game also delves into the dark side of stardom. It is a suspenseful family drama about a global superstar, who is also a mother and wife. The plot erupts when she mysteriously disappears leading to an investigation that unfolds the reasons for her disappearance and unveils the complicated life that glamour and fame bring.

Aranyak, Raveena Tandon’s digital debut showcases her as a strong, multifaceted female cop Kasturi Dogra from a small town. The suspense centres around a likely serial killer on the prowl, which Kasturi and her team investigate. At the same time, underneath the tough exterior of a no-nonsense policewoman, she showcases what it means to be an ambitious woman chasing her goals while balancing her struggles and managing a family.