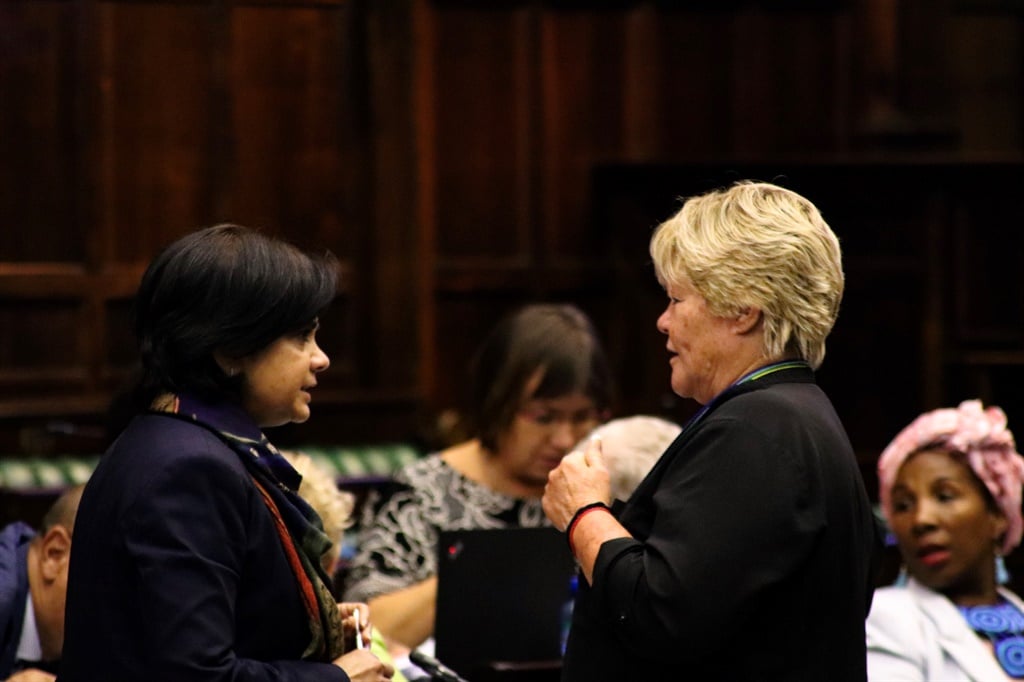 NDPP Shamila Batohi and DA MP Glynnis Breytenbach in conversation after a meeting of the Portfolio Committee on Justice and Correctional Services in October 2019.

Democratic Alliance MP Glynnis Breytenbach wants to ask “really tough” questions about the National Prosecuting Authority (NPA) and the Public Protector, and she doesn’t want to wait until the next parliamentary term.

On Monday, in a statement to Portfolio Committee on Justice Bulelani Magwanishe chairperson, she asked that the committee urgently convene to discuss the findings of the report which led to the NPA dropping charges against Johan Booysen and his co-accused, as well as the removal of Public Protector Busisiwe Mkhwebane after last week’s court proceedings.

“It is of the utmost importance that the committee urgently determines if any disciplinary and more serious action is being planned or underway against the prosecutors and officials exposed – and if this is not the case, really tough questions need to be asked as to the reasons why.”

“The second matter that the committee should urgently discuss relates to the Public Protector, Adv. Busisiwe Mkhwebane. Argument by her own counsel before the South Gauteng High Court last week raised the question of whether she had perjured herself; and revealed that she does not feel bound by court orders. This must give rise to questions as to why the Public Prorector should not be suspended with immediate effect, pending removal proceedings.”

Late last year, the National Assembly passed rules for the removal of the head of a Chapter Nine institution, like the Public Protector. Days later, the DA brought a motion for Mkwhebane’s removal.

As the Covid-19 storm hit, the process was halted but, in June, Parliament said National Assembly Speaker Thandi Modise was in the process of appointing three people to serve on a panel which would determine whether there was a case to be made for Mkwhebane’s removal.

Since then, there has been no word on the matter. The panel will have 30 days to determine whether there is a prima facie case against Mkhwebane.

“The DA firmly believes that the evidence will confirm that Mkhwebane is not fit to occupy the office of Public Protector and that she must be removed,” she said.

“Institutions such as the NPA and the Public Protector are crucial defences to ordinary South Africans against a corrupt ANC government, and as such the integrity of public office bearers with these institutions must be above any reproach.”

The National Assembly rose for a constituency period on 31 July and will resume its duties on 18 August.