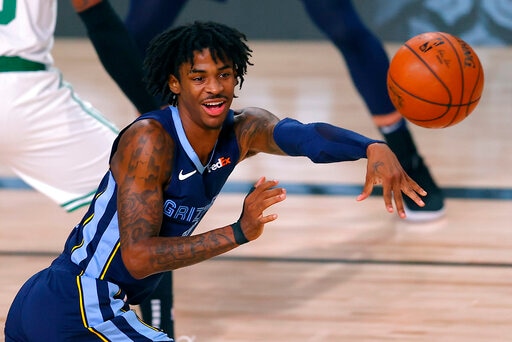 LAKE BUENA VISTA, Fla. A team is going to reach the Western Conference playoffs with a losing record for the first time in 23 years, which ordinarily would not be exciting news.

This year, its the talk of the NBA.

And the race has come down to the last possible day.

On Thursday, four teams Portland, Memphis, Phoenix and San Antonio will finally decide which two clubs get spots in the play-in series to determine the No. 8 seed in the West playoffs.

Portland and Memphis control their fates, while Phoenix and San Antonio must win and get help. The regular season ends Friday, but all four of the West play-in contenders wrap up play and decide matters Thursday.

We can finally look at it, Suns coach Monty Williams said. Its our next step. We know were not totally in control of our fate, but we put ourselves in a good position. Nobody would have guessed the Phoenix Suns would have been in this position when all of this started.

The Suns are 7-0 at the season restart, the darlings of the NBA bubble but finishing the seeding games at 8-0 doesnt even guarantee them a play-in spot. Phoenix plays Dallas in a 4 p.m. game, the same time as a matchup between Memphis and Milwaukee.

San Antonio faces Utah at 6:30 p.m., and Portland plays Brooklyn at 9 p.m. In potentially bad news for the Spurs who are bidding to be the first team in NBA history to make 23 consecutive playoff appearances the Mavericks, Bucks and Nets are all locked into their various postseason spots and have nothing at stake.

The way things have been down the stretch for these games, as tight as its been, its been pretty exciting, Portland coach Terry Stotts said.

Memphis guard Ja Morant, when asked by ESPN last month if the play-in tournament format was fair, said honestly, I dont think so. That’s when the Grizzlies had a 3-1/2 game lead on Portland for eighth place; that lead is all gone now.

Portland goes into the final day of the West race a half-game up on Memphis, which is technically ninth because it holds the head-to-head tiebreaker with 10th-place Phoenix. San Antonio, in 11th, is also just a half-game back of Portland.

Just got to out there and perform, Spurs forward Keldon Johnson said. Were going to wake up Thursday and were going to be ready to go. Were definitely going to leave it all out on the court. No doubt in my mind.

The play-in series between the eighth- and ninth-place teams after Thursdays games begins Saturday; the No. 9 team must win Saturday and Sunday to advance, the No. 8 team has to win just once.

At stake: A matchup with the Los Angeles Lakers in a West first-round series.

Even if the NBA counts the play-in games toward a teams overall record, the best winning percentage that any of the four teams would take into the playoffs and Game 1 against the Lakers is .480. The last time a team made the West playoffs with a record below .500 is 1997, when three teams Minnesota, Phoenix and the Los Angeles Clippers all pulled it off.

The standings between these four clubs are super close and given the way these clubs played against each other this season that should come as absolutely no surprise.

Scoring averages against one another this season:

The Blazers, Grizzlies, Suns and Spurs played a total of 20 games against one another this season with 10 of them decided by five points or less and only three decided by more than 10 points.

Wednesday was the first time in 201 days 60 during the actual season, the other 141 coming when games were halted because of the suspension caused by the pandemic that the Grizzlies did not wake up in eighth place.

WATCH: Indian men’s hockey team give guard of honour to ladies for bronze