Recent scientific research, British era documentations by geologists and other experts, and our ancient texts speak of a mighty river that originated in the Himalayas and reached the Arabian sea

There has been a tendency for long to tag the word “mythical” with the Saraswati river. The constant tagging has its purpose. Whenever a reader now reads the word Saraswati, his/her mind automatically adds the word mythical, even if the word is actually missing in print. This brings us to the question: Was Saraswati really a mythical river that existed only in the imagination of the writers and sages who composed the Vedas?

Saraswati is among the most discussed rivers in the context of Indian history, the waters of which once flowed from the Himalayas to the Arabian Sea, separate from the other historically famous Indus river. Besides the river being mentioned repeatedly in the Vedas, Puranas, and the epics, in the first half of the 19th Century James Tod, an officer with the British East India company while documenting his extensive travels and explorations of Rajasthan called it the “lost river of the desert”, and detailing its route said the river originated somewhere in the Siwalik Himalayas, passed through Hansi, Hisar, Hanumangarh, Rangmahal, Anupgarh, and Phulra, moving towards Derawar and Uch, where it was part of the dry bed of the ‘Khaggar’ between Jaisalmer and Rohri, and later “united with the branch from Dara… enlarging the eastern branch of the Delta of the Indus.”

The seasonal Ghaggar as seen today.
(Image from the research paper by PRL and IIT-Bombay, Chatterjee et al, 2019, ‘On the existence of a perennial river in the Harappan heartland’.

It was a few years later in 1855 that French geographer Louis Vivien de Saint-Martin first pointed out specifically that Ghaggar river was the remnant of the Rig Vedic Saraswati river. He made his derivations after studying various reports on the wide dry river bed lying between the Sutlej and the Yamuna rivers which were made by British topographers. That area was also exactly the location where Rig Veda mentioned Saraswati river to be. Interestingly, among the various reports that Saint-Martin had studied were included some old colonial maps from the 1760s that showed a small river named “Sursooty” or “Sarsuti” in that area (Michel Danino, The Lost River: On the Trail of the Saraswati, 2010).

Later, in 1874 (Oldham, CF), after more extensive studies, concluded that the course of the ‘lost river of the desert’ or Saraswati was indeed the present route of the Ghaggar-Hakra river that lies between Akalgarh-Tohana (Punjab in India), and Khangarh in Pakistan, linked to the now disconnected courses of the rivers Raini, Wahinda, Hakra and Nara that takes it to the Rann of Katch, and finally moving along the creeks to the Arabian Sea. Oldham made his conclusions based on extensive studies of the now mostly dry river beds and surrounding landscapes, from both on ground explorations and reading survey maps, while joining dots by matching them with descriptions given in the Rig Veda, the epics, and other ancient literature.

The identification of the Ghaggar course as the Vedic Saraswati was later endorsed by many other experts and scholars in the 20th Century such as AA Macdonell, AB Keith, Louis Renou, T Burrow, etc. Even recent scholars such as VK Puri, Shamsul Islam Siddiqi (1944), and Herbert Wilhelmy (1969) have endorsed the identification.

Archaeologists, such as Cunningham (1871), MA Stein (1941) Mortimer Wheeler (1950s), A Ghosh (1952), SP Gupta (1989), BB Lal (1997), GL Possehl (1999), RS Bisht (1990s), etc, have all agreed with the Ghaggar river being the Saraswati river. Post-Independence excavations in the 1950s headed by Amalananda Ghosh in Saraswati (Ghaggar) and Drishadvati (Chautang) led to the discovery of hundreds of Harappan era sites in the Ghaggar river basin. In 1974, on the Pakistani side, archaeologist Mohammad Rafique Mughal found 171 sites of the mature Harappan phase (Hakra Ware) in the Cholistan desert, thus documenting the fact that Sarasvati basin (Ghaggar–Hakra) totalled more than 360 sites of the mature phase, which then accounted for nearly one-third (32 percent) of the 1,200 known such sites in the entire Harappan region. The famous Harappan urban sites found in the Ghaggar-Hakra basin are Banawali, Bhirrana, Rakhigarhi (Haryana), Kalibangan (Rajasthan), and Ganweriwala (Cholistan).

In Gujarat, SR Rao discovered a few more sites including the famous Lothal port town, while JP Joshi discovered Dholavira and Surkatoda in Kutch and Saurashtra, with later more sites found in the same region by PP Pandya, G Possehl, etc. When all the numbers are added, it gives a whopping figure of 2,378 Harappan sites (Early, Mature, and Late) that lie in the basin of the Saraswati (Ghaggar-Hakra) and its tributaries itself; while the total number of the overall Harappan sites are 3,781 (listed in Danino, The Lost River: On the Trail of the Saraswati, 2010, pp. 140-141).

Looking at the figures it is clearly evident why the change of name from Indus Valley civilisation to Saraswati Indus/Sindhu civilisation for India’s ancient most culture is an appropriate one.

Several ancient Indian texts have provided detailed descriptions about the Saraswati river. Among these the oldest being the Rig Veda, where Saraswati river is described as the mightiest and the best among all rivers, despite the term saras actually meaning a lake. The epic Mahabharata too mentioned the Saraswati as lost in the desert sands, and then reappearing at different places in its downstream course, thus making it clear that the composer was aware of Saraswati losing its flow strength. Here it must be noted that ancient Indian texts, including the Vedas, were later compilations of much older verses and sermons that dealt with all aspects of life and environment that were passed on through generations following the ancient oral traditions, and were in a literal sense akin to an enormous knowledge bank accumulated over millenniums.

In the Nadistuti sukta verse 5 of the Rig Veda it is found that there are names of ten rivers, beginning with Ganga and moving westwards: 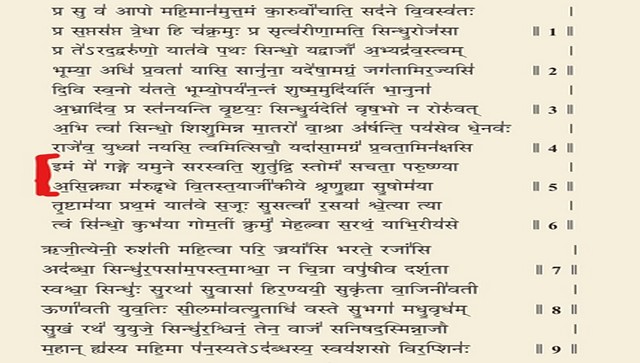 The Nadistuti Sukta from hymn 75 of the 10th mandala of the Rig Veda.

Besides this verse, the Saraswati river is found mentioned in many other Rigvedic ashtakas, Adhyayas, etc, and there are in total 72 references of the river. Saraswati as both a devi (first two stanzas) and a river (third stanza) is found in the Rig Veda’s First Ashtaka of the (Adhyaya-1, Sukta 3, 10-12): “May Saraswati, the purifier, the bestower of food, the recompenser of worship with wealth, be attracted, by our offered viands, to our rite. Saraswati, the inspirer of those who delight in truth, the instructress of the right-minded, has accepted our sacrifice. Saraswati manifest, by her acts a mighty river, and “in her own form enlightens all understandings” (translated by Wilson, 1866, p. 10).

Elsewhere in the Rig Veda, the Saraswati is described as the best and the purest among all rivers, which is fast-flowing and ocean-like, and it flows from the mountains to the sea.

From the verses it is clear the Vedic rishis knew Saraswati as a powerful river that was once fed from the snowy mountains, and its gushing waters once reached the seas. The later compositions and texts show that the writers were also aware about the gradually declining waters of the Saraswati river. In the Mahabharata it has been clearly mentioned that the Saraswati river loses its waters in a place known as Vinasana/Adarasana (a desert). The Mahabharata (3.81.115) gives the precise location of the Kuru kingdom as lying south of the Saraswati river and north of Drishadvati (Chautang) river. This is exactly the same geographical location where the now seasonal Ghaggar river still flows in Haryana and Rajasthan during the monsoons. 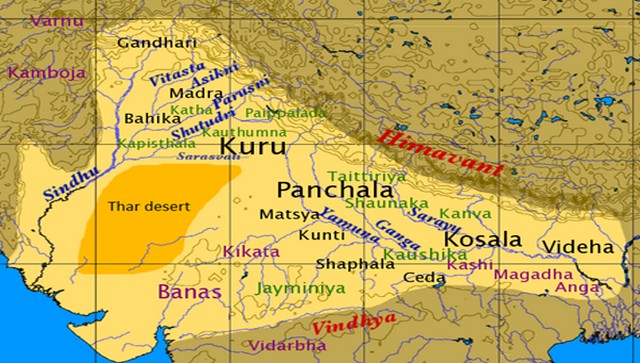 Map showing the Kuru kingdom as described the Mahabharata

From the Vedic texts and other ancient literature, British era reports, and post-Independence archeological excavation reports until the 1970s, it is clear that the Saraswati river was accepted as a reality and known to have existed that later disappeared for various reasons (which includes the movement of the Sutlej waters, and possibly Yamuna too, away from Saraswati, a topic too vast to be discussed in this article). So, now the question is, what went wrong from the 1980s? 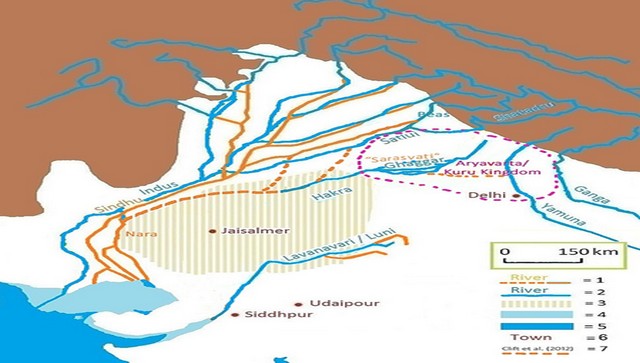 When did the Saraswati river turn into a myth?

In the 1980s came in a group of ‘historians’ who sought to overturn the very fact that there once existed a powerful river named Saraswati on whose banks thrived the first urban civilisation of India. Completely ignoring or denying the fact that the Rig Veda had verses that in great details described the river and its landscape, these historians set about creating a narrative in support of their own mythical theories of ‘Aryan Invasion’ and ‘Aryan-Dravidian divide’, and propounded that the Vedic Saraswati was a mythical river (abstract concept of a ‘river devi’), and never really existed (Irfan Habib, 2000). This was, however, in complete contrast to what was found in the ancient Indian literature that provided detailed descriptions of an existing river, its gradual decline, and later disappearance amidst the desert sands. The placing of Saraswati river in Afghanistan (Rajesh Kochhar, 2000) also doesn’t hold water as the Nadistuti Sukta clearly marks the position of the Saraswati river between Yamuna and Sutlej. If all the other rivers mentioned in that verse that are still flowing are correctly marked, why would the sage who wrote the verse out of the blue suddenly create a mythical river named Saraswati, and whimsically mark it between Yamuna and Sutlej?

The part mentioned in the verse is also exactly the area where Ghaggar-Hakra river basin remains, where monsoon waters in the upper parts still help in creating a seasonal stream. Here it must also be mentioned that Afghanistan finds no mention in the Rig Veda, and the forced dating of Rig Veda as 1500 BCE is also incorrect, as the Vedas like all other ancient Indic texts are a later compilation of knowledge transferred orally through generations over centuries, possibly millennia.

Recent researches involving satellite imagery that had started from the 1970s, and is still continuing, have provided greater insight and detailed images of the numerous palaeochannels of the Ghaggar-Hakra system. These images have also clearly shown the presence of a complex network of a once large river with its many channels. With many researches available on the topic, this requires separate attention and discussion, and perhaps a separate article. However, to sum it all up, most of these recent scientific researches point in one direction: The presence of a mighty river that once flowed in the space lying between the current course of Yamuna and Sutlej rivers. 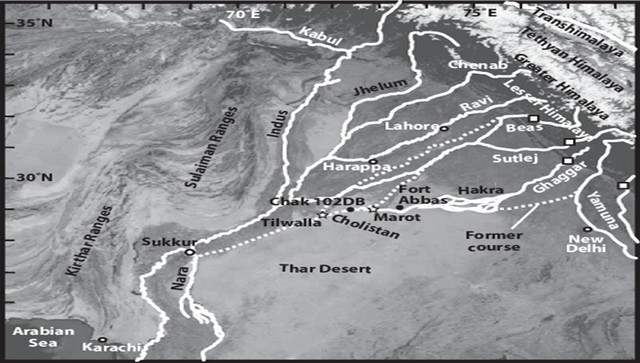 The author is a well-known travel and heritage writer. Views expressed are personal.