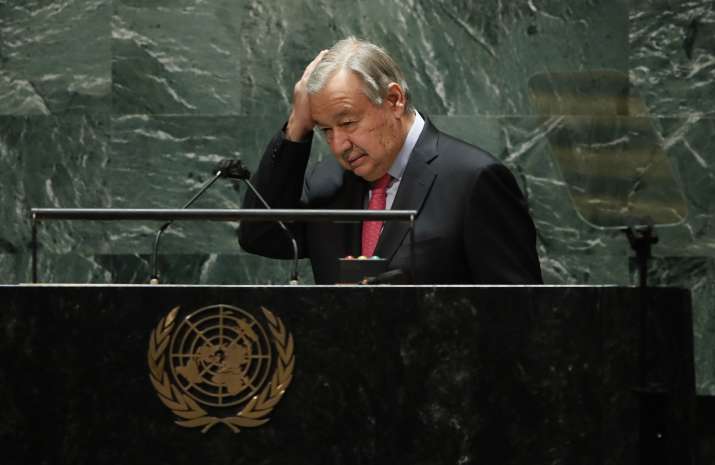 Despite the strong exchanges between India and Pakistan at the high-level General Assembly session last week, UN Secretary-General Antonio Guterres is hopeful that dialogue between them is possible.

Asked at his daily briefing about the acrimonious statements, he said: “We heard the remarks, and I think, despite the tone and the content of the remarks, we also always remain hopeful that dialogue can happen, maybe in a place that is not under the spotlight.”

Pakistan’s Prime Minister Imran Khan launched a vehement attack on India on Friday, targeting the BJP and the RSS in particular.

Responding to him, Sneha Dubey, a first secretary in India’s UN mission, called out Pakistan for its record on terrorism and said that it “is an arsonist disguising itself as a firefighter”.

“This is a country which has been globally recognized as one openly supporting, training, financing and arming terrorists as a matter of State policy. It holds the ignoble record of hosting the largest number of terrorists proscribed by the UN Security Council,” she said.

She also recalled the genocide of at least 300,000 people perpetrated by Pakistan in Bangladesh during and before its War of Independence.

Laying out the scenario for a dialogue, Dubey said: “We desire normal relations with all our neighbours, including Pakistan. However, it is for Pakistan to work sincerely towards creating a conducive atmosphere, including by taking credible, verifiable and irreversible actions to not allow any territory under its control to be used for cross border terrorism against India in any manner.”

Speaking the next day, Prime Minister Narendra Modi did not directly engage with Pakistan, but only spoke generally about the dangers of terrorism – which was obviously a reference to Islamabad’s patronage of terrorism.