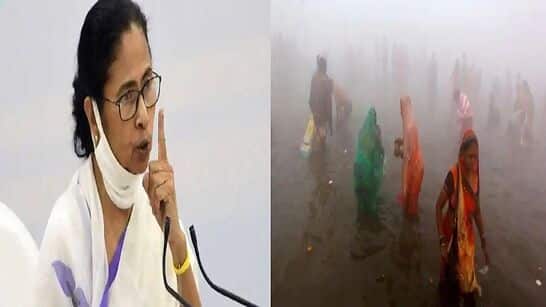 Kolkata: West Bengal Chief Minister Mamata Banerjee Wednesday cautioned pilgrims coming to the state not to pay heed to any rumour or fake news to avoid any untoward incident during the coming Gangasagar Mela. She assured the pilgrims that her government has made arrangements so that they do not face any problem during the annual festival. Banerjee said that apart from senior ministers and state government officials about one lakh a huge number police and disaster management personnel, civic volunteers, NGO workers and doctors will be present at the Sagar Island, the site of the holy dip at the confluence of the Hoogly and the Bay of Bengal, to help the pilgrims.

“Fake news and rumours cause chaos, so be careful .. Do not pay heed to them to avoid any untoward stampede-like situation,” she said inaugurating the Gangasagar Mela from the city’s Outram Ghat transit point.

“Do not try to do anything in haste as it may be dangerous ,. We have made all arrangements for you to ensure a hassle-free Gangasagar Mela. Listen to government announcements, which will be made also be in Hindi. If you want to alert people about certain information, reach out to the police. Police are there to help you,” Banerjee said and conveyed her good wishes to the pilgrims who had gathered there from various parts of the country.

Referring to “fake” reports in a section of the media of stone pelting on the Vande Bharat Express in Bengal, she said in reality it had happened in Bihar and asked journalists to be responsible while presenting news.

Banerjee had earlier warned of strict legal actions against scribes who reported that the stone pelting had taken place in the state. Following it Kolkata Police had lodged an FIR at a city police station against a few journalists belonging to reputed media houses.

She had visited Gangasagar Island last week and personally reviewed the arrangements at Sagar Island. The state government has claimed that 70 lakh pilgrims will visit the annual Ganga Sagar Mela.

At the Outram Ghat programme, Banerjee instructed city mayor Firhad Hakim to start preparations for the proposed Ganga Aarti, similar to the one held in Varanasi at Babughat.

“Since there is no ghat like Varanasi here, Ganga Aarti will be held on a wooden platform. The preparation for it will start on Thursday. Ganga Aarti will be done only after all the preparations are complete,” she said adding powerful lights will be installed at the place. Banerjee along with cabinet ministers and senior government officials earlier visited the nearby areas to choose the spot.