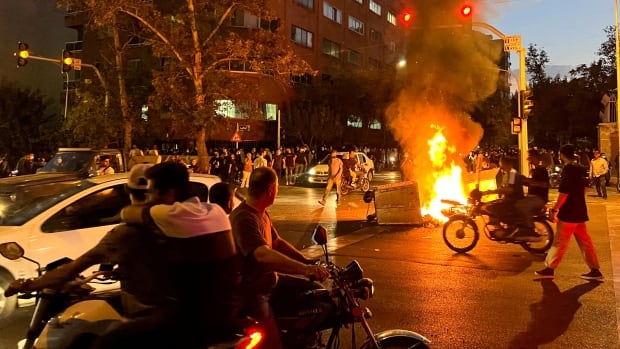 A false claim about the fate of detained Iranian protesters shared on social media by Prime Minister Justin Trudeau and other famous figures has drawn criticism from human rights experts, who say it could undermine the uprising against Iran’s regime.

More than 15,000 people have been arrested for participating in anti-government protests over the past eight weeks, sparked by the death of 22-year-old Mahsa Amini in police custody, after she was arrested for allegedly failing to wear her hijab properly.

The protest movement has since spread across the country, with demands for greater freedoms and the overthrow of Iran’s government — prompting a bloody crackdown that has killed at least 328 people, including 50 children.

In a since-deleted tweet, Trudeau on Monday denounced “the Iranian regime’s barbaric decision to impose the death penalty on nearly 15,000 protestors.”

The figure Trudeau cited has been discredited as false information.

According to official news sources in Iran and external observers, upward of 2,000 people have been charged over their alleged involvement with the protests, including at least 20 who were facing charges that could carry the death penalty. Authorities announced the first death sentence for a protester on Sunday.

Experts say that while the misinformation shared by Trudeau and others is unfortunate, it should not overshadow the severe consequences that protesters could face, including potential death sentences, or the Iranian government’s harsh efforts to stop dissent.

“I don’t think there’s any need for us to try to speculate or get ahead of what the Iranian government is capable of doing, because Iranian security and judicial officials have been committing extremely serious human rights violations over the past four decades,” said Tara Sepehri Far, a researcher investigating human rights abuses in Iran for Human Rights Watch.

She and other experts on human rights in Iran were concerned that false information, shared by a Western leader, would play into the Iranian regime’s narrative that the protests were a foreign plot to destabilize the country.

“We know that the Iranian government would love to find one case of a mistaken statement and use that to discredit all information about the violence they’re committing,” Hadi Ghaemi, executive director of the Center for Human Rights in Iran, told CBC News from New York.

Human Rights Watch’s Tara Sepehri Far says inaccurate information about the fate of protesters in Iran could aid the regime’s claims that foreign governments were behind the unrest.

“We should be worried [for the protesters], but we don’t have to necessarily say 14,000 people are at risk of execution, because that’s not the facts on the ground — and yet, even one execution is too many.”

Iran’s foreign ministry did not respond to a request for comment Tuesday. However, multiple state-linked media outlets took aim at Trudeau on Twitter, with one depicting him in clown makeup and labelling the prime minister a “fake news maker,” while another called Trudeau’s deletion — which came about 11 hours after the tweet was posted — “an obvious retreat.”

Trudeau’s office said the tweet was based on “initial reporting that was incomplete and lacked necessary context,” pointing to news stories from Newsweek and Yahoo News. (Newsweek has since corrected its story.)

Similar tweets by a number of international political commentators and other users remained on Twitter Tuesday evening. The posts had not been flagged as misinformation by the social media site.

Experts told CBC News they expected Iranian judges to order the executions of more protesters in the weeks and months ahead.

The country’s judiciary chief last week said he had instructed judges to “avoid showing unnecessary sympathy” to protesters who they deemed “the main elements of these riots,” Iran’s semi-official Students News Agency reported.

“I’m sure a large number of those [protesters] are already being tortured and some of them, I regret to say, will probably face execution,” Kaveh Shahrooz, a human rights activist, lawyer and senior fellow at the MacDonald Laurier Institute, told CBC’s Power and Politics.

Protesters continue to defy Iran’s regime, taking to the country’s streets on Tuesday to mark three years since another deadly crackdown on unrest. Kaveh Shahrooz, a human rights activist, lawyer and senior fellow at the MacDonald Laurier Institute says the government’s efforts to ‘scare’ the protesters are failing.

But Sharooz also pointed out that the state’s crackdown and the threat of harsh penalties have failed to quell the protests.

On Tuesday, Iran saw fresh demonstrations and labour strikes marking three years since the unrest that came to be known as “Bloody November.” That’s when violent protests over fuel prices led to the government shutting down the internet and its forces killing hundreds of people, although some sources put the number of dead above 1,500.

“[The government] will try to create fear by detaining people, torturing them, executing some, unfortunately. But … I don’t think this is going to work. The Iranian people seem unafraid at this point,” Shahrooz said.

Later this month, the United Nations Human Rights Council will hold a special session on the human rights situation in Iran, at the request of dozens of countries, including Canada.

Human rights organizations hoped the UN would investigate the treatment of the protesters, and hold the Iranian government accountable for its actions.

Without such an investigation, Ghaemi said, it remains a challenge to gather credible information about the situation inside Iran — as Trudeau seems to have discovered. But he said that anyone can make a mistake.

“Therefore, I give the benefit of doubt to any of us outside who try to bring attention to Iran.”