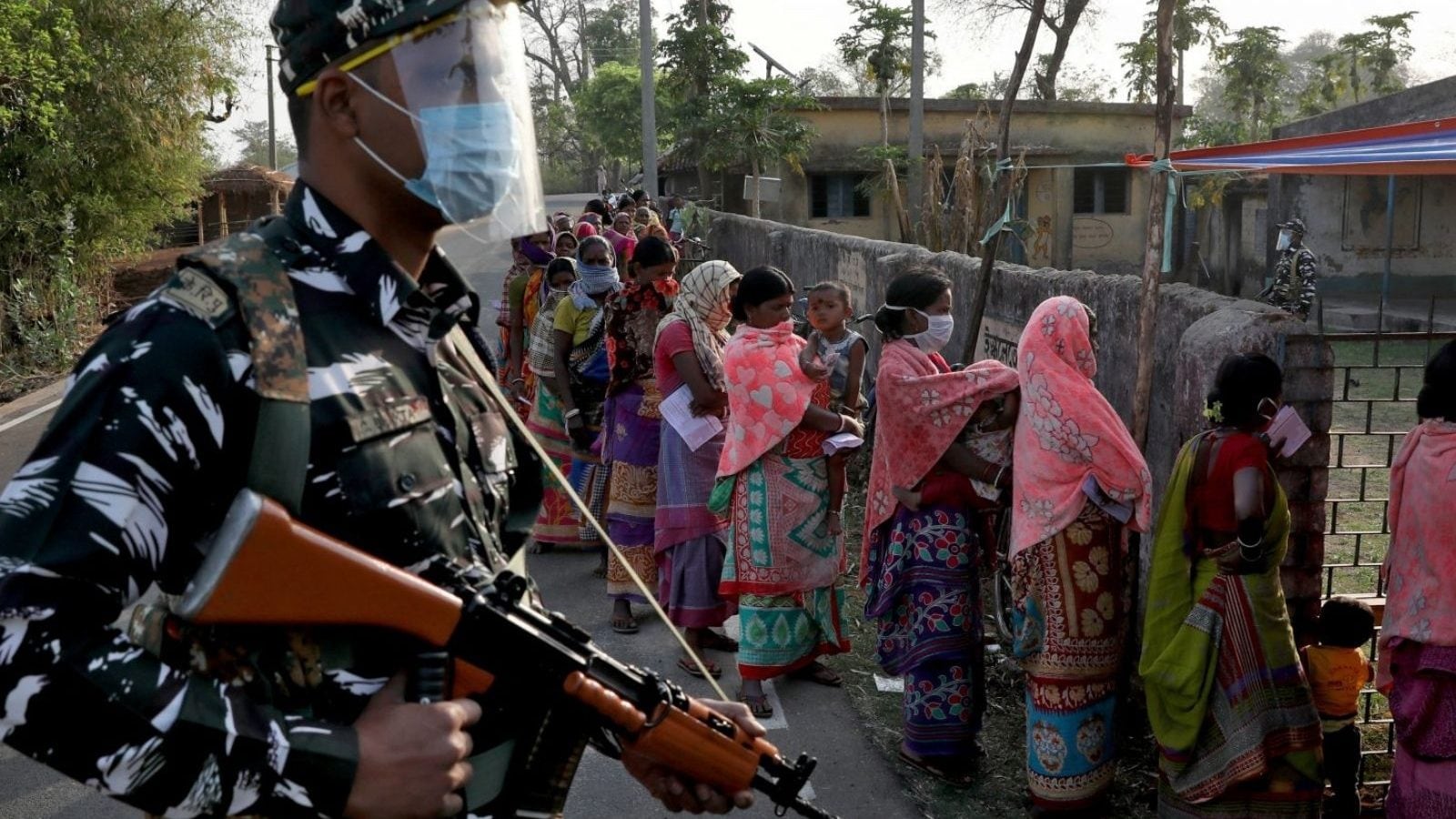 For file: An armed policeman wearing a face shield stands guard as women wait in line to cast their votes outside a polling booth during the first phase of the West Bengal state election in Purulia. (REUTERS/Rupak De Chowdhuri/File)

The Union government had in October issued a notification extending the jurisdiction of the border force in West Bengal, Punjab and Assam from the existing 15 kms to 50 kms from the front.

Apprehensions of the West Bengal and Punjab governments with regard to the recent enhancement of jurisdiction of the Border Security Force are “ill-founded”, and this will rather help in “more effective control” of trans-border crimes in cooperation with the states, the government told the Rajya Sabha on Wednesday. The Union government had in October issued a notification extending the jurisdiction of the border force in West Bengal, Punjab and Assam from the existing 15 kms to 50 kms from the front.

Minister of State for Home Affairs Nityanand Rai, said in a written reply, that the governments of West Bengal and Punjab have expressed their “apprehension that such a move encroaches upon the powers of the state government”. “Their apprehensions are ill-founded. The extension of territorial jurisdiction of Border Security Force (BSF) would result in better and more effective control on trans-border crimes in conjunction and cooperation with the states,” the minister stated.

Rai said Section 139 (1) (i) of BSF Act, 1968 empowers the central government to confer powers and duties on members of the force in respect of any central Acts for the purposes specified. In reply to another question on the same issue, he said the enhancement in jurisdiction is “aimed at empowering BSF to discharge its border guarding duties more effectively in the wake of use of technology like dynamic remotely operated navigation equipment (drones), unmanned aerial vehicles (UAVs), among others, generally having long range, by anti-national forces for surveillance as well as for smuggling for arms, narcotics and fake Indian currency notes (FICN)”. “It would also help in curbing the menace of cattle smuggling as smugglers take refuge in interior areas outside the jurisdiction of BSF. There is no impact on the jurisdiction of state governments,” he asserted.

UP Polls: SP Allots Tickets to At Least 10 More Muslim Candidates in Phase 2, But Silently