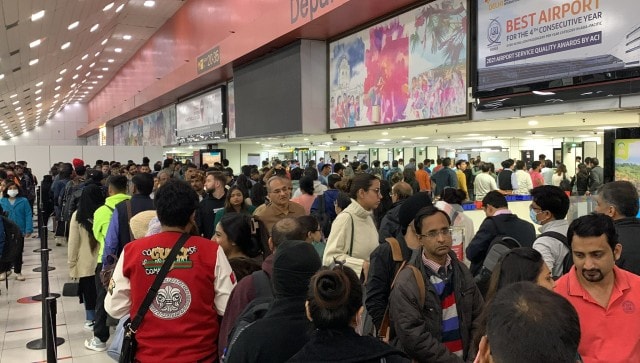 New Delhi: A drunken man was arrested for allegedly urinating and creating nuisance at a gate in the departure area of terminal-3 at the IGI Airport, police said on Wednesday.

One Jauhar Ali Khan, scheduled to depart from Delhi on a flight to Dammam was urinating publically in front of departure gate 6 at IGI Airport T3 on Jan 8. Khan, who seemed to be inebriated, also abused passengers. He was arrested & later released on a bail bond: Delhi Police

Jauhar Ali Khan (39), a resident of Bihar, was arrested on Sunday evening and later released on the same day on a bail bond, police said.

Ploice said Khan, who was scheduled to depart from Delhi to Dammam in Saudi Arabia, was seen urinating publically in front of departure 8 Gate No 6 at IGI Airport T3 on 8 January.

Police said they received the information about the incident around 5:30 pm and when they reached the spot they found him to be in a drunken state.

He also created nuisance at the public place by screaming and abusing other people, they added.

Khan was examined at the Safdarjung Hospital and he was found to have consumed alcohol, Deputy Commissioner of Police (airport) Ravi Kumar Singh said.

A case under sections 294 (obscene acts and songs) and 510 (misconduct in public by a drunken person) of the Indian Penal Code (IPC) was registered at IGI Airport and Khan was arrested. He was later released on a bail bond, the DCP said.

Earlier, one drunken man allegedly urinated on a woman co-passenger in an inebriated condition in the business class of the Air India flight from New York to Delhi on 26 November 26.

The Delhi Police had registered an FIR against him on  4 January on a complaint given by the woman to Air India and arrested him from Bengaluru on Saturday.

The accused was arrested from Bengaluru. A court later sent him to judicial remand for 14 days.