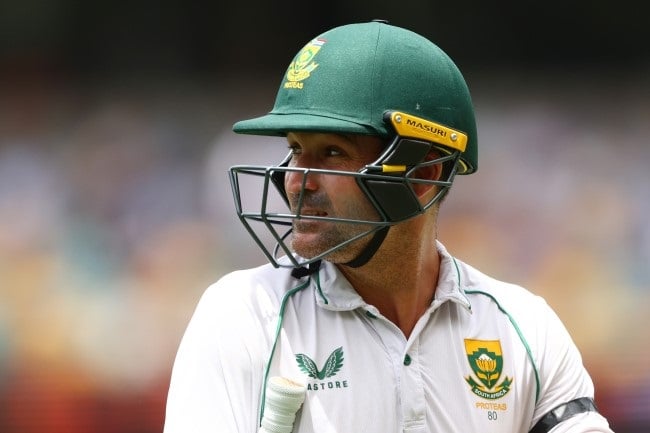 Proteas skipper Dean Elgar expressed his frustration at Australia’s successful leg-trap plan that bamboozled the opener in the Test series against Australia.

The Proteas lost the three-match series 2-0 and one of the chief reasons for their defeat was Elgar’s inability to get going at the top of the order.

Elgar only made 56 runs at an average of 9.33 with a highest score of 26, as Australia’s plan of tying him down the leg side worked like a charm.

Elgar admitted that Australia’s plan was a smart one but was upset at how he felt the hosts’ plan undermined his form.

“I’ll accept it maybe once or twice, but the third time really irritates me,” Elgar said.

“It’s something different and I think you have a way of going out and bowlers target that. But this is something new and foreign territory for me.

“It’s something to reflect on. You could call it s**t luck, but I’ll have an open mind around it. However, it was frustrating that I could never get going in the series.

“When I did get going, I managed to run myself out. There have been times when I batted worse, but I got the performances.

“Prior to the series, I was in good form, so I won’t put it down to a form thing, so it’s maybe other aspects and something new.”

The first two days of the third and final Test contained cricket but were afflicted by bad light when the South Africans were fielding.

Elgar congratulated the umpires for handling the three contentious catches in the game very well, but he wasn’t pleased with how the bad light issue was handled.

The third day was washed out, which effectively relegated the game to a draw, from where Elgar voiced his concerns over safety for fielding teams in bad light scenarios.

“I think player safety needs to be the first point on the sheet when it comes to entertainment because there were times when we couldn’t see the ball,” Elgar said.

“It’s tough when you’re standing square of the wicket and if a guy slashes the ball to gully and it hits a guy on the head, it’s not going to be a good advert for cricket.

“I’m pro to ‘let’s play’ because Test cricket doesn’t get enough coverage, but there has to be common sense and sanity.

“I understand there are lights, but if you’re playing in the dark and in the rain, where do the players fit in?”