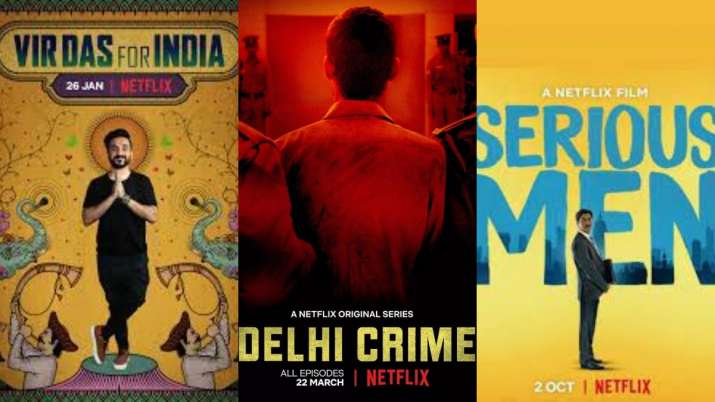 Nawazuddin Siddiqui, Ram Madhvani’s ‘Aarya’ and the now-controversial Vir Das are among the host of nominees for the International Emmy Awards, which will honour excellence in television programming at its 49th edition at Casa Cipriani in New York City on Monday night (U.S. Eastern Time). The event will see awards being handed out in 11 categories for which nominees from 24 countries are in contention. Three titles from India have been named in the nomination list this time. Ahead of the event, here are Emmy nominated titles from India that are absolutely binge worthy:

An adaptation of the Dutch series ‘Penoza’, the series streaming on Disney+ Hotstar has Sushmita Sen playing the titular role of Aarya Sareen, who becomes a mafia queen after her husband is murdered at the behest of drug lords. The series also stars Chandrachud Singh, Namit Das and Sikander Kher.

Lust Stories is an anthology of short stories formulated by some of India’s most renowned filmmakers. The collection features stories by directors like Anurag Kashyap, Zoya Akhtar, Dibakar Banerjee, and Karan Johar with the central theme, of course, Lust. It stars actors like Radhika Apte, Manisha Koirala, Vicky Kaushal, Neha Dhupia, and Sanjay Kapoor are some of the many noteworthy names that are part of the series.

Season 1 of Sacred Games by Anurag Kashyap and Vikramaditya Motwane had generated a lot of buzz amongst the audience and critics alike. It revolves around a Bombay-based gangster and an honest cop. The show draws a lot of credit for its raw portrayal of the city’s dark underbelly and keeps you hooked for the best part of it.

This Indian satirical comedy-drama film by Sudhir Mishra is based on a book by Manu Joseph and features Nawazuddin Siddiqui as the protagonist. The story revolves around Ayyan Mani, a middle-class man living in the slums with his wife and kids, enraged at his situation, Ayyan develops an unconventional story that his 10-year-old son is a science genius—a lie that later gets out of control.

Mumbai-based marriage consultant, Sima Taparia requires no introduction after the release of Netflix’s Original Indian Matchmaking. A reality show based on Indian couples helps several millennials to find ‘The One’. Watch as young singles from Houston to Mumbai cross the world of an arranged marriage with all its drama!

The multi-talented comedian Vir Das has been one of the oldest and sought-after names in the Indian comedy circuit. ‘Vir Das for India’ is a remarkably heartening Indian show about all things Desi – including our love for Parle-G biscuits, Old Monk rum and over-the-top weddings. With sharp one-liners, Vir Das boxes the perfect balance of telling the narrative of us Indians in the most humorous way possible.

Delhi Crime is inspired by and follows the notorious December 2012  investigation by the  Delhi Police into a devastating rape of a young woman that reverberated across India and the world. Throughout seven hour-long episodes, Delhi Crime captures the complexities of the scrutiny, the emotional toll on the investigating team, and their determination to bring the perpetrators to justice in a fraught environment.

Aarya can be streamed on disney+ Hotstar, whereas other titles are available on Netflix!