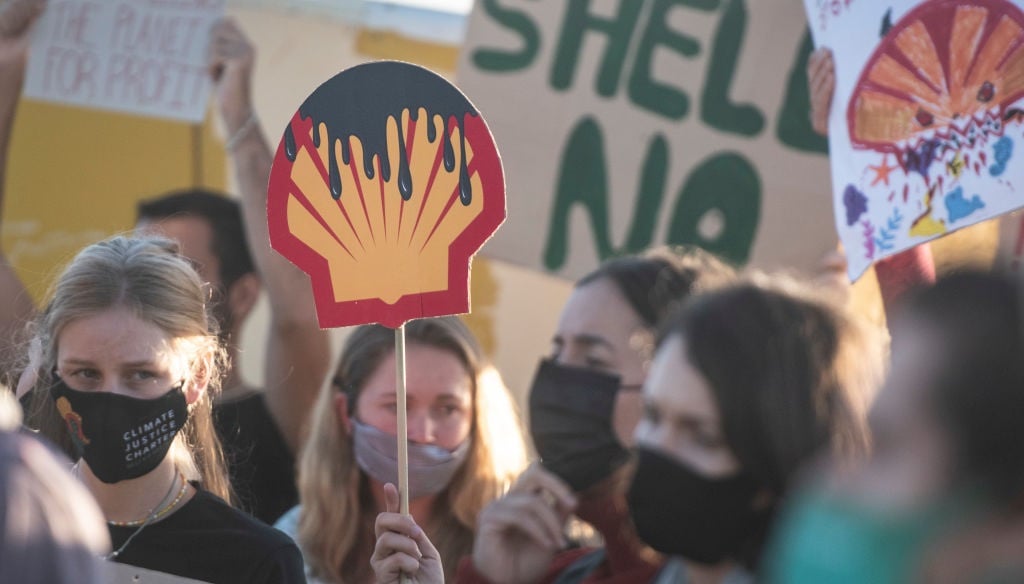 Protesters at the V&A Waterfront, 21 November.

A group of environmental and human rights organisations have filed an urgent court application to block oil and gas company Shell from going ahead with a seismic survey off the South African East Coast.

The interim interdict was filed in the Eastern Cape Division of the Grahamstown High Court. There will be a virtual hearing on the matter at 14:00 on Thursday, 1 December. The applicants include Greenpeace Africa, Natural Justice, Border Deep Sea Angling Association, and the Kei Mouth Ski Boat Club.

The respondents listed in the notice of motion are Shell; the Minister of Mineral Resources and Energy, Gwede Mantashe; Minister of Forestry Fisheries and Environment, Barbara Creecy; BG International Limited; and Impact Africa Limited. They have until 16:00 on 30 November to indicate their intentions to oppose.

The seismic survey which is conducted to detect oil and gas reserves is due to kick off on 1 December and should last between four to five months. It will be conducted 20km off the coast, in an area covering 6 000km2 between Port St Johns and Morgans Bay.

Seismic surveys involve using airguns to send pulses of sound into water. As these sound waves hit the seafloor they are reflected back and special equipment is used to read the information to map out the seafloor and detect where there are oil or gas reserves.

Among the issues raised is that the seismic survey will interfere with marine life, which depends on sound to navigate, find food, avoid predators and even find mates. Some environmental groups have also raised concerns that resultant drilling of oil could lead to spills that are damaging to the environment.

Shell and the Petroleum Agency of SA have defended the survey as being safe, indicating that measures are being taken place to ensure no animals will be near the sound source when the survey takes place.

Shell has also said it has met environmental obligations and is acting within its legal right – but this is what environmental groups are challenging.

According to a joint statement issued by the Cullinan & Associates as well as environmental groups Natural Justice and Greenpeace Africa, the seismic surveys are unlawful until Shell has applied for and obtained environmental authorisation in terms of the National Environmental Management Act (NEMA).

In a letter sent to Mineral Resources and Energy Minister Gwede Mantashe, dated 23 November, Cullinan & Associates reiterate that it does not believe Shell has the environmental authorisation required by NEMA and that going ahead with the survey would be unlawful. Cullinan & Associates requested Mantashe and director general Advocate Thabo Mokoena to prevent the exploration from taking place until Shell obtains necessary authorisations and that any appeals or reviews with respect to the authorisation have been determined.

The letter notes that the exploration right was granted and the environmental management programme was approved under the Mineral and Petroleum Resources Development Act (MPRDA) – prior to 8 December 2014. There have since been changes to law which now bring into question the validity of the permit that Shell has been granted, environmental groups suggest.

“An assessment that is over eight years old does not accurately reflect the current local context and the rapidly evolving stresses on marine ecosystems. It is also important to consider the rapidly evolving scientific understanding of the harms to marine ecosystems from these blasts, which has increased substantially since 2013 when the EMPr was submitted,” the letter states.

But the Department of Mineral Resources and Energy has previously said the permit remains valid. An independent audit was undertaken in 2020 to confirm the controls and mitigation measures are still valid and the outcomes of the audit confirmed this. “The outcomes of the audit were that the measures contained in the environmental management programme sufficiently provide for the avoidance and mitigation of potential environmental impacts,” the department said in a written response to Fin24.

Shell has also previously told Fin24 that the authorisation it has for the project is still valid.

“In 2020, an independent specialist audit report was performed on the EMPr (environmental management programme), which confirmed that these requirements are still sufficient and valid for this project to be taken forward… We can confirm we are operating within our legal right and we have met all our obligations,” Shell spokesperson Pam Ntaka previously said.

The applicants are also raising concerns that interested and affected parties were not informed of the granting exploration right, nor were they given an opportunity to appeal it. “The public [was] also not notified of the two applications to renew the exploration right,” the statement read.

The DMRE has said that in May 2020, a notification was sent to an interested and affected party database, to allow them to comment on the independent audit report.