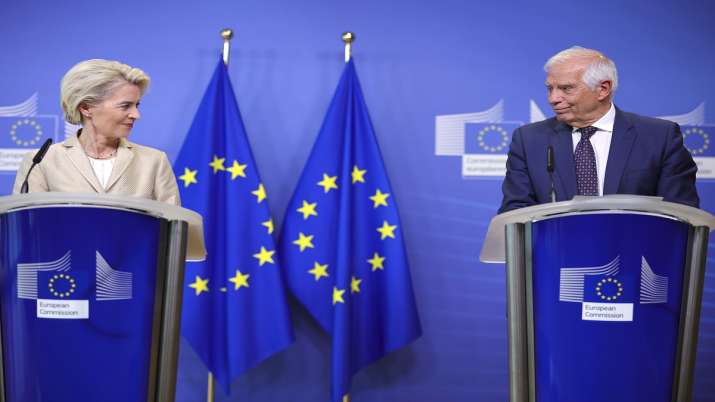 “We are determined to make the Kremlin pay for this further escalation,” she said, as she unveiled what she described as “sweeping new import bans on Russian products.”

“This will keep Russian products out of the European market and deprive Russia of an additional 7 billion euros in revenue,” von der Leyen told reporters in Brussels.

She said the EU’s executive branch also advises extending the bloc’s own export ban “to deprive the Kremlin’s military complex of key technologies,” including electronic components and specific chemical substances.

The proposals still must be endorsed by the bloc’s 27 countries.

Finance ministers from the Group of Seven industrial powers pledged this month to impose a cap on the price of Russian oil in a bid to limit the Kremlin’s revenues, while also curtailing the war’s impact on energy prices and inflation.

The ministers said they would impose the cap by barring insurance or shipping companies from helping Russia sell oil at prices above the set limit.

On top of that, von der Leyen recommended a ban on EU nationals sitting on the governing bodies of Russian companies, saying that “Russia should not benefit from European knowledge and expertise.”

People who help Russia to circumvent sanctions could also face sanctions themselves, under the proposal outlined Wednesday.

EU foreign policy chief Josep Borrell said asset freezes and bans on travel in Europe would be imposed on the “proxy Russian authorities” in the Donetsk, Kherson, Luhansk and Zaporizhzhia regions. Officials there said Wednesday that they would ask President Vladimir Putin to incorporate their provinces into Russia.

Borrell said he also wants to target senior Russian defense ministry officials and those who support the armed forces by providing it with equipment and weapons, or who help to recruit the 300,000 reservists that Putin has called up.

“Sanctions work. Sanctions matter. But they have to be maintained over time and … not circumvented,” he said.

The European Commission has drawn up several rafts of sanctions against Russia since Putin launched an invasion of neighboring Ukraine seven months ago.

Banks, companies and markets have been hit — even parts of the sensitive energy sector – with asset freezes and travel bans slapped on over 1,200 officials.

But the hard work is yet to come. The economies of the EU’s 27 member countries have been battered by the COVID-19 pandemic are now struggling against high inflation, with skyrocketing electricity and natural gas prices. Sanctions are getting harder to agree as they also inflict damage at home.

The last round of sanctions was announced May 4 book took four weeks to gain bloc-wide approval as concerns over oil restrictions divided member countries. In July, rather than impose fresh measures, the EU adopted a “maintenance and alignment” package that mostly closed loopholes on sanctions already agreed upon.

The actions ultimately agreed on this time are likely to be less ambitious than the commission’s recommendations and imposed only after much debate and hand-wringing among the 27 countries in coming weeks.

Earlier Wednesday, an economic adviser to Ukrainian President Volodymyr Zelenskyy, Oleg Ustenko, urged the EU to act as soon as possible, and in particular to ban all fossil fuels coming from Russia.

“Around 50% percent of (Russia’s) budget revenues are coming from this sector,” Ustenko said. “Oil, gas, uranium, and coal. And all this should be banned. Everything related to their fossil fuels should be cut off. They should not get any penny out of these exports.”